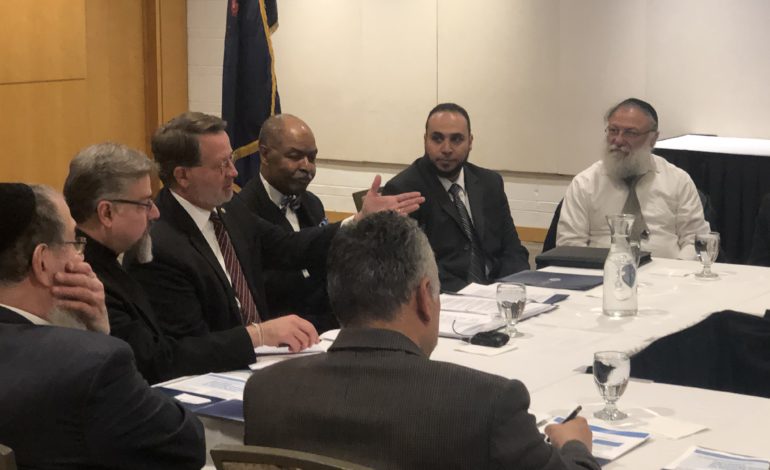 A fact sheet compiled by the National Consortium for the Study of Terrorism and Responses to Terrorism, or START, shows a distinct spike in the number and frequency of these attacks on religious institutions in the last 10 years.

At the roundtable, held at St. John’s Armenian Church in Southfield, Peters highlighted his bipartisan legislation that recently advanced in the Senate to provide grants to religious organizations to help secure their facilities against potential terrorist attacks. The grant includes non-profit organizations.

“Places of worship should be a safe haven, where people can practice their religion without fear of being attacked,” Peters said. “But tragically, the rise in the number of violent attacks against synagogues, mosques and churches across the country has shattered that expectation.”

Earlier this year, Senator Peters launched a bipartisan inquiry into the government’s efforts to prevent domestic terrorism and the recent surge in extremist violence against religious institutions, including attacks committed by White supremacists, White nationalists, neo-Nazis and related groups.

An unclassified 2017 Joint Intelligence Bulletin prepared by the FBI and DHS concluded that White supremacist extremists were responsible for more homicides and attacks over the past 16 years “than any other domestic extremist movement.”

“These acts of hatred and bigotry toward our fellow Americans have no place in our society,” Peters said. “I was encouraged by our frank and productive discussion on how to best ensure that Michigan’s houses of worship can remain a safe haven and what more the federal government can do to help accomplish that goal.”

Religious leaders from the Metro Detroit area attended the roundtable to discuss their security concerns and how they can benefit from the Department of Homeland Security’s (DHS) Nonprofit Security Grant Program.

Law enforcement officials, including representatives from the DHS’s Cybersecurity and Information Security Agency and the Michigan State Police, advised attendees about best practices for improving security in churches, synagogues, mosques, gurdwaras and other houses of worship.

Peters’ bipartisan Protecting Faith-Based and Nonprofit Organizations from Terrorism Act, which he introduced with U.S. Senator Rob Portman (R-OH), would authorize $75 million annually over the next five years for the Department of Homeland Security’s Nonprofit Security Grant Program.

Under the legislation, funding may be used for target-hardening activities, training for personnel and other activities to help secure these institutions and the people they serve from violent attacks. The Senate Homeland Security and Governmental Affairs Committee unanimously approved the legislation in June.