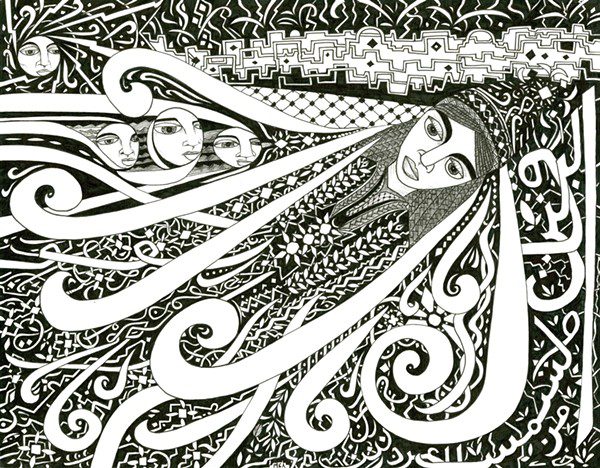 DETROIT —A collection of Palestine-themed works from several Palestinian artists is currently on display at the Holding House artist-run workspace here, comprising a thought provoking new exhibit titled “Preoccupations: Palestinian Landscapes.” The exhibit is aimed at expanding and exploring the traditional narrative about Palestinians and their homeland.

The exhibition, a group collection of landscape art, was curated by California native Kathy Zarur and kickoff events were co-hosted by the Habibi House art residency in Detroit.

While the occupation of Palestine is mostly ignored or whitewashed by the mainstream media and major art galleries, the exhibit features a wide range of abstract artwork from several different media aimed at representing the many unspoken feelings surrounding Palestinians and their affinity for their native, and rapidly-shrinking, homeland.

Housed in the humble, relatively unmarked gallery at 3546 Michigan Avenue a few hundred feet from the popular Hygrade Deli, the exhibit includes a library of Palestine-focused literature as well as video exhibits, paintings and more, all made possible through the magic of crowdfunding.

“The idea behind Preoccupations is: how do Palestinians represent the land in the context of their own relationship to that land?” Zarur, a Palestinian American, said. “Some people have never been there and cannot go there; other people maybe have a mythical idea of Palestine.

“Growing up, though I had never been to Palestine, we referred to it as ‘back home’.”

Perhaps most striking part of the exhibit is “The Harvest is Full of Thorns”, a 15-minute preview segment from University of Michigan graduate and artist Ryah Aqel, who created it for a film in progress, “Masafer Yatta: They Destroy, We Rebuild.”

The clip shows a Palestinian farmer toiling away in his fields, showcasing the natural landscape of an idealized, original Palestine without the burden of Israel’s settlement building, which has been declared internationally illegal and is increasingly choking off Palestinian access to the outside world.

Other works explore the identity of Palestine in other ways, including Mary Tuma’s outlines of historic Palestine in a centered grid made from bits of maps of the Detroit area and the country, drawing a visual connection between a diaspora of Palestinians and their original one.

A photographic series from artist Yazan Khalili is also included in the gallery, which uses darkness to imagine a landscape without Israel’s system of militarized checkpoints, watchtowers and the wall.

Another wing of the exhibit features artist Zeina Barakeh’s works, which blend the harsh realities and chaotic elements of war and conflict in the region with fantastical elements, including centaur-like creatures with the head of a horse and the body of a woman.

The creatures were inspired by a photo she once saw of British mounted police in Palestine, which she perceived to look like the mythological beasts.

Barakeh contrasts cold, dry text from United States Department of Defense war manuals containing “rules of engagement” on the battlefield with chaotic imagery of how it all actually plays out in real life, with the centaurs symbolizing the colonizing powers wresting control of the land away from the natives.

“Things are always muddled and history is always constructed and reflected by the dominant power,” she said. “This is sort of how I think about using those images and how I combine them.”

Barakeh, who is based in San Francisco, experienced conflict firsthand during the Lebanese Civil War.

“I’ve seen a lot of conflict living there, a lot of violence and a lot of political divisions that sort of erupted in violence after the Israeli invasions,” she said.

Her creation and use of the mythological characters is an expression of how she “has been directly confronted” by the conflicts she’s lived through, she said, and they are quite a sight to see in person.

The exhibition runs through its closing reception on February 8, which will be from 7 p.m. to 9 p.m. The exhibit will close with a reception featuring performance duo Tawil & Khoury (dancer Leyya Mona Tawil and musician Mike Khoury), who will respond to a screening of “The Harvest is Full of Thorns.”

The event will be co-hosted by Arab.AMP and Entropy Stereo.

Regular hours are 1 p.m. through 5 p.m. on Saturdays. Other hours are available by appointment by contacting preoccupations@fastmail.com.

More information on upcoming events can be found at www.kathyzarur.com or www.holdinghousedetroit.com.