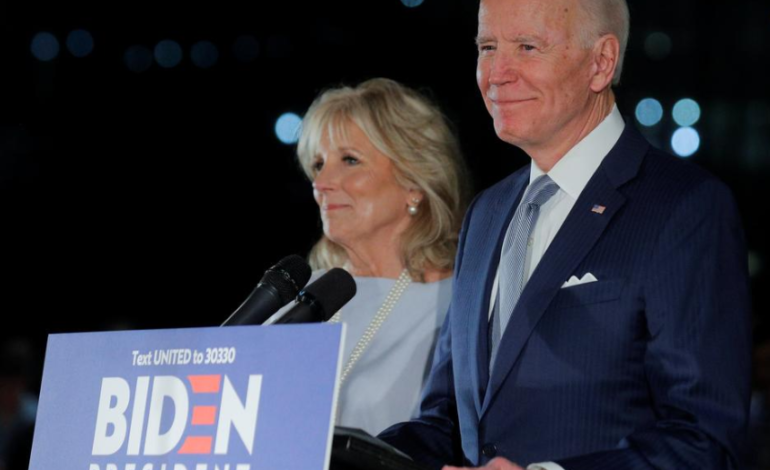 Democratic presidential candidate and former Vice President Joe Biden speaks with his wife, Jill, at his side during a primary night speech at the National Constitution Center in Philadelphia, PA, March 10. REUTERS/Brendan McDermid

Biden finished with 838,564 votes for 52.9 percent of the total, according to the Associated Press count, while Sanders, the independent senator from Vermont running as a Democrat, had 576,916 votes for 36.4 percent.

Sanders won the Hispanic vote in Michigan by a final tally of 53 percent to 29 percent, while Biden fared particularly well among African American voters, winning the vote 66 percent to 27 percent, according to exit poll results posted on CNN’s website, continuing the dominant trend seen across the nation this year.

Despite a strong turnout in Dearborn for Sanders, voters strongly preferred Biden because of his perceived ability to defeat incumbent Donald Trump, according to Sanders himself.

“We are losing the debate over electability,” Sanders said.

The current delegate total sits at 867 for Biden against 711 for Sanders, with Washington state still reporting only 77 percent of its results and Biden holding a 35 percent to 33.7 percent lead as of Thursday afternoon.

“It’s been a great night — thank you for all of your support!” Biden tweeted on Wednesday after results were announced.

“We’re bringing this party together and it’s going to take all of us to keep it going.”

Sanders’ only national victory on Tuesday took place in North Dakota, where he secured eight delegates to Biden’s six, winning the race by a total of 53.3 percent to 39.8 percent.

Biden also won Mississippi, Idaho and Missouri, cementing himself even further as the favorite to face Trump in November.

“We share a common goal,” Biden said after flying to Philadelphia, where he arrived following the cancellation of a rally in Cleveland due to the coronavirus. “And together we’ll defeat Donald Trump. We’ll defeat him together. We’ll bring this nation together.”

Next up, the primary circuit will shift to Arizona, Florida, Illinois and Ohio on Tuesday, March 17. A total of 663 delegates will be up for grabs, with the final primaries slated for June and the Democratic convention for July 13-16 in Milwaukee.

According to the Michigan Secretary of State’s Office, Sanders won the youth vote in Michigan among voters ages 18-29 by a margin of 76 percent to 19 percent for Biden. However, young voters made up only 16 percent of the electorate, compared with just over half in 2016, according to the Detroit Free Press.

Biden won 54 percent of the overall vote in Wayne, Oakland and Macomb Counties.

Also on Tuesday, the Detroit Institute of Arts millage renewal passed in Wayne, Oakland and Macomb counties, allowing the museum to receive about $25 million a year from Metro Detroit taxpayers.

The issue received about 62 percent approval in Macomb county along with about three-fourths of voters in Wayne and Oakland counties.

“The DIA is a true cultural treasure and we thank the voters of Macomb, Oakland and Wayne Counties for renewing their support for this renowned institution that gives one-of-a-kind access to art, culture and history,” said DIA Board Chair Eugene A. Gargaro, according to The Detroit News.

“We also want to thank our amazing team of volunteers and supporters who made phone calls, did mailings, put up lawn signs and worked tirelessly to spread the message of why the DIA is part of what makes our community a great place to live, work and raise a family.”