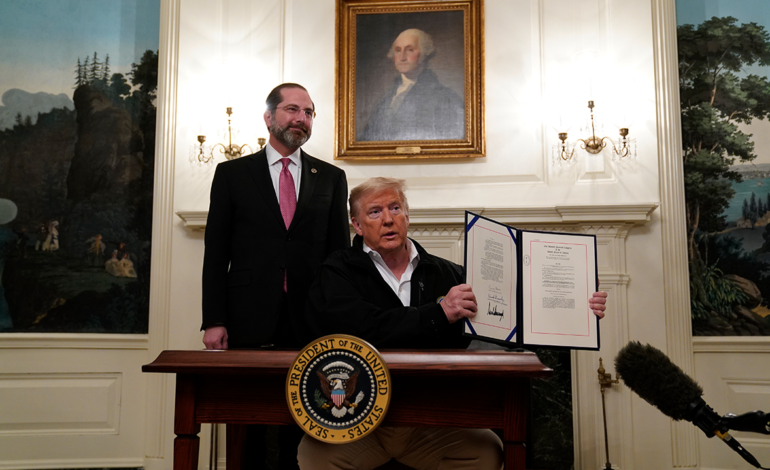 President Trump hold up an $8.3 billion bill to fight the coronavirus outbreak in the U.S., Friday, March 6, 2020 at the White House in Washington after signing it, as Department of Health and Human Services Secretary Alex Azar, looks on. - Photo by AP

WASHINGTON, D.C. – President Trump faced one of the gravest threats of his political career as the coronavirus pandemic spread, leaving fellow Republicans to worry that the White House’s response and the hit to the economy would harm his re-election prospects.

U.S. stock market indexes that Trump has touted throughout his term as evidence of his success plunged into bear market territory on Thursday — a day after he tried to calm Americans’ fears with an Oval Office address that promised economic stimulus and a 30-day travel ban for Europeans.

Some Republicans worried that the measures were too little, too late for an administration that for several weeks minimized the risk of the COVID-19 respiratory disease caused by the virus that has killed at least 39 Americans.

“The president’s early downplaying and politicizing of the virus hurt his credibility and will make people question the administration’s readiness from now until the day this passes,” said Mike DuHaime, a Republican strategist who ran Chris Christie’s gubernatorial campaigns in New Jersey.

“The president’s greatest strength has been the economy. If the stock markets continue to tank, and real people begin to hurt financially, it will hurt the president politically.”

Trump emerged triumphant last month after his Senate acquittal in a Democratic-led impeachment drive, ready to ride high on a strong economy as a crowded field of Democratic candidates bickered over who was best to take him on in November’s general election.

The narrative quickly changed. In the past two weeks, moderate Democrats  have consolidated their support behind former Vice President Joe Biden over liberal Senator Bernie Sanders. They are betting that Biden can draw support from across the party, as well as from suburban moderates and disaffected Republicans.

Biden seized the chance to offer a contrast to voters with his own coronavirus speech on Thursday. He lambasted the administration’s handling of the crisis while seeking to portray himself as a steady, experienced hand in the face of a public health emergency.

“I’d rather be Joe Biden than Trump right now,” said a Republican official close to the White House. “A month ago, Trump is looking at Bernie Sanders and a strong economy and rising favorability after impeachment. Coronavirus cannot have a positive impact.”

Trump’s re-election campaign defended the president’s actions and in a statement accused Biden of trying to “capitalize politically and stoke citizens’ fears.”

The growing threat from the coronavirus forced Trump to reverse course on Thursday and suspend his large campaign rallies.

“The safety, security and health of the American People is President Trump’s top priority right now,” the Trump campaign said in a text.