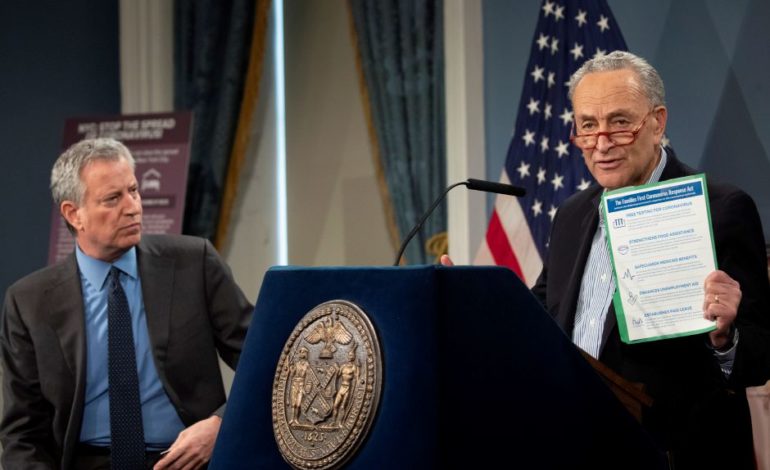 A wide-ranging economic stimulus bill passed by the House of Representatives was said to be on its way to the Senate, but Schumer believes it doesn’t provide enough support.

“We will need big, bold, urgent federal action to deal with this crisis,” he said in a statement outlining a plan to fund emergency operations, including boosting hospital capacity, expanding jobless benefits, help to small businesses and funding childcare for healthcare workers.

The House is scheduled to return from a recess on March 24, a day later than originally planned. Leaders were said to be working on plans to limit the number of lawmakers allowed on the floor at any one time to help control the spread of the coronavirus.

“The Senate is committed to meeting these uncertain times with bold and bipartisan solutions.”

Mitch McConnell, the Senate Majority Leader, said in a speech that the House had not yet forwarded its bill for the Senate to vote on.

The bill would require paid sick leave for some workers, expanded unemployment compensation and nearly $1 billion in additional money to help feed children, homebound senior citizens and others, and has the backing of the White House.

McConnell likely would have to gather a supermajority of at least 60 votes for the House bill to clear procedural hurdles, Reuters said.

The plan would “get money directly into hands of American people” and include measures to help people afford healthcare, forbearance on federal loans, a moratorium on evictions and foreclosures, help for small businesses and child care, and more, NBC News reported.

Congress has already passed and Republican President Donald Trump has signed an $8.3 billion bill aimed at helping to develop a coronavirus vaccine, although such a vaccine is not expected for at least 12 to 18 months. It would also aim to ensure better supplies of medical equipment and help state and local governments deal with the crisis.

Republican Senator Mitt Romney called for swift approval of the House bill and for additional legislation, including $1,000 to each adult American, to help “meet their short-term obligations and increase spending in the economy.”