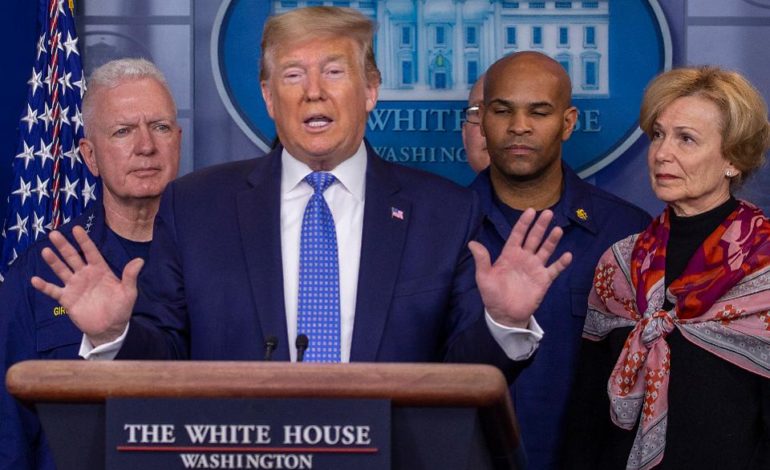 WASHINGTON, D.C. — President Trump signed a multibillion-dollar emergency aid package aimed at helping Americans impacted by the coronavirus on Wednesday, the same day the Department of Housing and Urban Development announced it will suspend all home foreclosures and evictions to the end of April amid the coronavirus outbreak.

The measure, passed by the House and approved by the Senate on Wednesday, includes provisions offering paid leave benefits for Americans, boosts unemployment benefits and offers free diagnostic testing for the virus.

“The (Families First Coronavirus Response) act makes emergency supplemental appropriations and other changes to law to help the nation respond to the coronavirus outbreak,” Trump said in a statement Wednesday night after signing the bill, according to The Hill.

The bill was the product of days of negotiations last week between Treasury Secretary Steve Mnuchin and House Speaker Nancy Pelosi (D-CA), and is the second such legislative package passed by Congress to address the COVID-19 outbreak.

It was passed by a 90-8 vote on Wednesday afternoon, with a handful of Republican senators voting against it.

Trump declared a national emergency last week over the virus and on Monday recommended that Americans avoid restaurants and bars, cut back on unnecessary travel and restrict gatherings to 10 or fewer people over the next few weeks as the federal government helps to mitigate the spread of COVID-19, also known as the coronavirus.

According to ABC News as of Thursday night, there have been 13,000 diagnosed cases of coronavirus in the United States and at least 177 deaths. The numbers of those diagnosed is expected to continue to rise significantly as more test kits are offered and used.

The CDC also reported that 38 percent of a study of 508 patients hospitalized were notably younger, between 20 and 54, than the usual groups of elderly people who are being stricken by the virus. Nearly half of the 121 patients admitted to the ICU were adults under 65, the CDC also reported.

The oldest patients still had the highest likelihood of being hospitalized, and of dying, as has been the norm across the world.

On Thursday, Senate Republicans formally announced a $1 trillion economic stimulus plan designed to deliver aid to U.S. businesses and the American public, who have been hit hard by the effects of the coronavirus, CNN reported.

The proposal will, “first, direct financial help for the American people,” he said. “Second, (provide) rapid relief for small businesses and their employees. Third, significant steps to stabilize our economy and protect jobs. And fourth, more support for the brave health care professionals and their patients who are fighting the coronavirus on the front lines.”

Included in the proposal are direct payments to Americans under a certain income threshold, $200 billion in loans to airlines and distressed industry sectors, and $300 billion in forgivable bridge loans for small businesses.

The proposal is an opening bid as the Senate attempts to address the coronavirus outbreak. It was drafted by Republicans and the Trump administration with no input from Democrats, CNN reported.

Billions of dollars are expected to be directed toward “recovery rebates” of up to $1,200 for individuals and $2,400 for couples beneath a certain income threshold.

The small business loans must used to pay for salaries, mortgage payments, other debt obligations and payroll support, including sick, medical and family leave, as well as health care.

McConnell promised swift action, although it is not known when the Senate will vote on the package.

“The Senate will not adjourn until we have passed significant and bold new steps above and beyond what the House has passed to help our strong nation and our strong underlying economy weather this storm,” McConnell said.

The proposed plan is bigger than the 2008 bank bailout and the 2009 American Recovery and Reinvestment Act, the latter of which totaled $787 billion to help stabilize the economy about 14 months after the last recession began.

Trump added that the Department of Housing and Urban Development will suspend all home foreclosures and amid concerns about the outbreak.

“HUD will suspend all foreclosures and evictions until the end of April,” Trump said.

During a press conference from the White House briefing room on Wednesday, Trump added that he was working with HUD Secretary Ben Carson on the matter.

United States “almost certainly” to see a recession from the coronavirus, Schumer says

Senate Minority Leader Chuck Schumer (D-NY) said the Trump administration is preparing for an almost certain recession as restaurants, bars, and other “non-essential” operations close their doors to prevent the spread of the virus.

“Even as the market shifts from day to day, coronavirus is slowing our economy to a near standstill and we’re almost certainly anticipating a recession,” Schumer said.