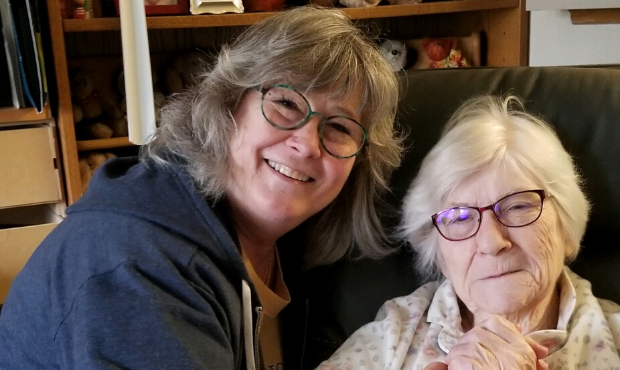 KIRKLAND, Wash. — A 90-year-old woman from Washington state who had a stroke in December can now add “coronavirus survivor” to the list, as she was declared free of the virus this weekend.

“She never gave up. She is a fighter, she is a survivor,” said Cami Neidigh, the daughter of 90-year-old Geneva Wood.

“She’s weak and she’s lost a lot of weight. To give her a hug, she’s so fragile but it was great. She wouldn’t let go, it was a nice, long, hard hug.”

Wood even had a sign outside her hospital room, “COVID-19 CLEAR.”

It’s been a challenging year for Wood, who learned to walk and talk again after her stroke and was days from going home when the coronavirus outbreak was discovered at the nursing home.

“To fight back, to be able to walk and talk,” Neidigh said. “She was going on home on Monday and they had the lockdown on Saturday. She was so close to walking out that door. A few days later she’s at Harborview fighting for her life.”

Wood previously fell and broke her hip at Life Care Center in Kirkland, where she had been recovering from the stroke. It may have saved her life, as she was later taken to Evergreen Medical Center where her family asked for her to be tested for the coronavirus.

The test came back positive and when she got a fever, she was taken to Harborview Medical Center.

On March 11, her condition declined to the point where doctors had her family come to say goodbye, according to a report from KIRO-7 News.

From the other side of the glass, Wood reached for her daughter, who, sensing her desperation and grief, convinced hospital staff to let her give her mom one last hug wearing full protective gear.

“She was crying for us and reaching her arms out to us and crying,” Neidigh said. “They finally let us suit up and go in one at a time and talk to her. She gave us her last instructions and she was saying her goodbyes and we were all at peace.”

Despite her grim prognosis, Wood kept improving. Neidigh credits the potato soup, a family recipe, she asked for.

She said her mom wanted them to be proud of her for fighting her way back.

“This has gone world-wide because we’re trying to keep it positive,” Neidigh said. “It’s not political, it’s a message of hope and keep fighting and take care of each other.”