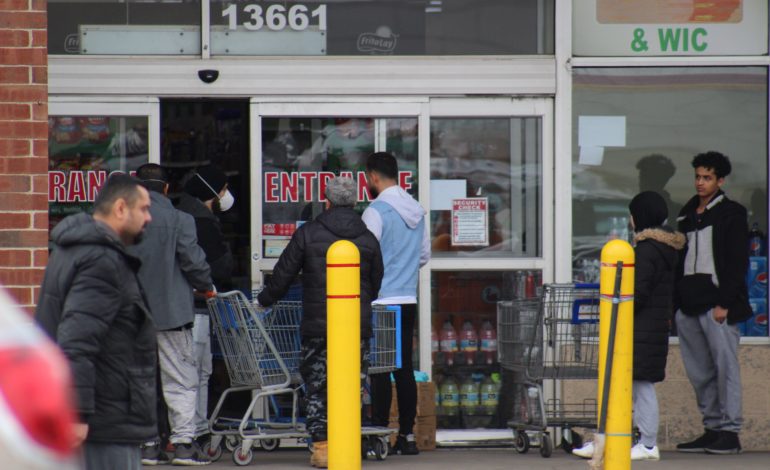 Customers line up in front of Dearborn Fresh on Michigan Ave. to be let in by a worker in a mask. Grocery store workers, many of whom make close to minimum wage, have no choice but to work during the COVID-19 pandemic. All photos: Hassan Abbas/The Arab American News

DEARBORN — A strange yet familiar scene plays out at grocery stores in Dearborn on most days, one that has been commonplace since the outbreak of COVID-19 in the state reached a critical level.

Customers stand in line outside the double door, waiting for an employee in a face mask and gloves to let them in one at a time. At Papaya Fruit Market, shoppers use a hand sanitizer dispenser before entering the store, grab gloves made available to them and then go about the risky business of shopping with others, being careful to maintain the recommended six-foot distance from each other.

The trash bin outside overflows with used gloves, a true sign of the times. Grocery stores are now more than ever reliant on their employees, many making close to minimum wage, to show up and carry out the increasingly complex dance of maintaining daily operations while trying to stay safe. Some stores, like Super Greenland, have gone as far as placing barriers between cashiers and customers. Others, like Kroger in Dearborn, are barely practicing the most basic social distancing standards.

The fact that some workers, like the cashiers at Dearborn’s many popular grocery stores, are deemed “essential” under the state’s new “stay home” order, and are told to go back to work, puts them face to face with the glaring contradictions of this order, and the economy in general.

If these workers are deemed so essential to life now, how have they been so dispensable, deserving of the lowest of wages and living standards, before the pandemic? And if the state has told residents that if they go outside they should not congregate and involve themselves in activities with others, how can this rule not apply to all economic activities, especially those considered menial before the crisis, like bagging groceries?

The state of Michigan has no answer to these questions (we checked), and the cashiers at Papaya making $10 per hour know that the disease is not worth their “essential” job and have decided to walk out by next week. They will join the ranks of workers all over the world who have decided their lives matter more than the dead-end jobs that kept them in poverty and never provided a decent living in the first place. Some supermarkets, such as Super Greenland, have put up barriers between cashiers and customers. Stores like this are not common, however. Big chains like Kroger in Dearborn have been practicing only the most basic social-distancing standards.

Target in Dearborn does it what it does best: Make profits

In my opinion, the company hasn’t done enough to protect us. We’re not required to wear masks or gloves, and many stores are only closing one to two hours earlier than usual. They haven’t tried to shut down non-essential departments such as toys or beauty, and if you look in the week’s ad you’ll see that they are practically inviting customers to flood the store based on what they choose to put on sale — A Target employee

An employee at a busy Target at Ford and Greenfield Road told The Arab American News that leading up to Governor Whitmer’s executive order, the store had done everything it could to maintain its operations. This includes skimping on the safety of its employees and fighting them over benefits.

“Working since the onset of the COVID-19 outbreak has been unlike anything I’ve seen in 10 years of retail experience,” said the employee, who wished to remain anonymous. “It’s felt like Black Friday every day, but with less than half the staff. Guests are visibly panicked and confused.

“In my opinion, the company hasn’t done enough to protect us. We’re not required to wear masks or gloves, and many stores are only closing one to two hours earlier than usual. They haven’t tried to shut down non-essential departments such as toys or beauty, and if you look in the week’s ad you’ll see that they are practically inviting customers to flood the store based on what they choose to put on sale.”

The only real protective measure put in place was implementing a more regular cleaning throughout the store and making sure employees had hand sanitizer available to them. Target temporarily waived its absenteeism policy, though the employee had not actually heard a manager say that employees should stay home if they don’t feel well. It also increased pay from its starting wage of $13 per hour to $15, until at least May 2.

“While this is appreciated, most of us don’t feel it’s adequate, especially those of us who are older or have at-risk family members at home,” the employee said. “Employees who didn’t meet the hourly work requirements in 2019 will also be losing their health insurance after this month, even in the midst of a global pandemic. Re-determination for benefits is calculated every February.” A “non-essential” business, the Ford-Wyoming Drive In Theater, sits empty on a weekday.

A broken unemployment system leaves out the most vulnerable

Neither the Governor’s Office, nor Michigan’s Unemployment Insurance Agency has answers for these “essential” service-sector workers who are forced to work high-traffic, high-contact jobs, if their workplace is fortunate enough to remain open during the crisis. Tallies show more than 10 million applied for unemployment in the U.S. in March.

If the fast food restaurant, gas station or grocery store they toil away at remains open, then they must work and hope they don’t get sick or infect others, the chances of which now seem slim. If the business does close down, then they will get in line behind thousands of Michiganders who have flooded the state’s malfunctioning unemployment claims website, to hopefully see a check in a few weeks.

But what if these workers, like the cashiers at Papaya, refuse to show up to their jobs, fearing for themselves or their loved ones? The state simply has no answer for them, neither does it have the infrastructure to end people’s dependence on businesses to provide basic goods and services. Michigan’s so-called expanded unemployment expansion program shows that the state has decided that these workers are in fact completely expendable, that they’ll have to wait till they get sick, or are forced to take care of a loved one, to be eligible for assistance.