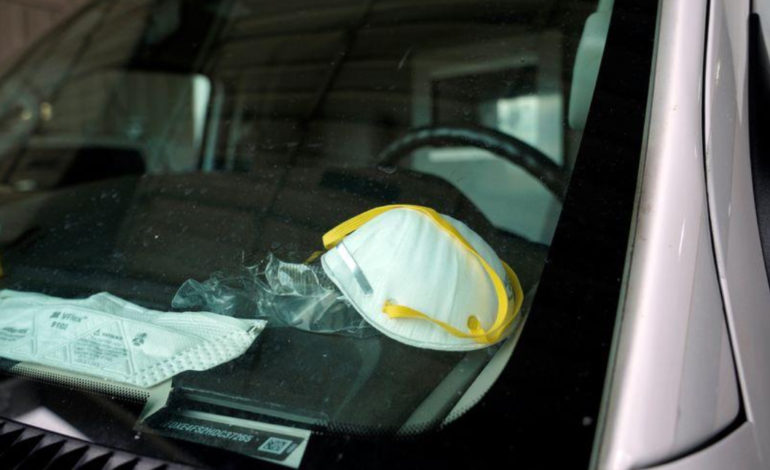 A protective face mask is seen on the dashboard of a REACT EMS ambulance in Shawnee, Oklahoma, U.S., amid a coronavirus disease (COVID-19) outbreak, April 2. REUTERS

WASHINGTON/NEW YORK — On Thursday, the Trump administration looked set to join local officials in advising Americans to wear masks when venturing out during the still-exploding coronavirus pandemic, as the U.S. death toll rose by 1,000 in a single day for the first time.

Speaking at a White House briefing, Deborah Birx, a member of President Trump’s coronavirus task force, said the U.S. Centers for Disease Control and Prevention (CDC) would in the coming days add a recommendation about masks to guidelines on protective measures.

But Birx said Americans, almost all of whom have been told to stay at home except for essential outings, should not develop a “false sense of security” that they are fully protected from the respiratory illness by covering their faces.

Trump, answering questions from reporters at the briefing, said only, “if people want to wear them, they can.”

As of Thursday evening the U.S. death toll from COVID-19, the respiratory illness caused by the coronavirus, stood at 5,887, with more than 243,000 cases across all 50 states.

Global cases surpassed 1 million on Thursday, with more than 52,000 deaths, according to a Reuters tally based on country-by-country data.

White House medical experts have forecast that between 100,000 to 240,000 Americans could be killed, even if the sweeping lock-down orders are followed.

The Trump administration, the CDC and public health officials have all wavered on the issue of face masks since the pandemic broke out, initially telling healthy people such measures were unnecessary or even counter-productive.

The mayors of New York City and Los Angeles both urged residents to cover their faces. New York Mayor Bill de Blasio cited studies showing the virus can be transmitted by infected people who are showing no symptoms.

“What that means is when you put on that face covering you’re protecting everyone else,” de Blasio said.

The Democratic mayor suggested New Yorkers use scarves or other home-made masks because medical-grade protective gear was in short supply.

An emergency stockpile of medical equipment maintained by the U.S. government has nearly run out of protective garb for doctors and nurses.

In New York City, where at least 1,400 people have been killed by the virus, hospitals and morgues struggled to treat the desperately ill and bury the dead.

Funeral homes and cemetery directors described a surge in demand not seen in decades as cases surpassed 50,000 in the city.