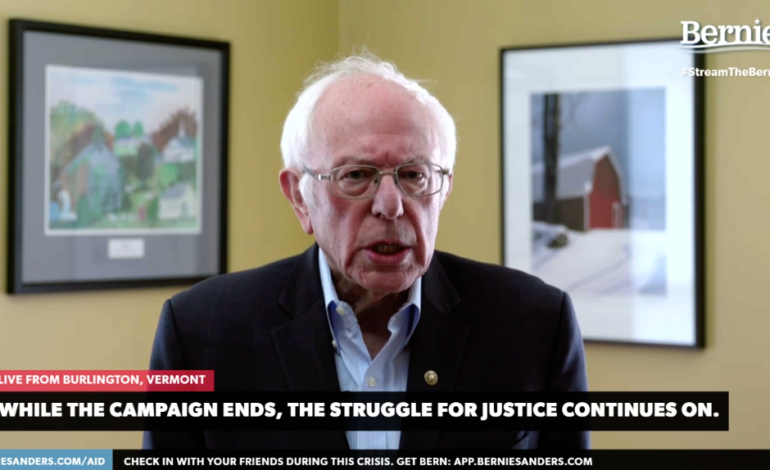 VERMONT — Senator Bernie Sanders has officially dropped out of the running to be the Democratic presidential nominee. He plans to make an official announcement to his supporters at 11:45 a.m. Eastern Time.

Sanders suspended his campaign for the 2020 Democratic presidential nomination on Wednesday in a conference call with staff, his campaign said in a statement.

In a live streamed address to his supporters, Sanders thanked the hundreds of thousands of volunteers who helped canvass for him in various states, many of which he won, allowing him to emerge early on as the front runner for the nomination. However, the dropping out of key opponents like Pete Buttigieg and Amy Klobuchar and the full support of the Democratic establishment, including African American voters, all but secured the nomination for former Vice President Joe Biden earlier this year.

Sanders said that even though his campaign planned to hang its hat for this election, it had won the ideological battle and had proved that its platform was widely popular across multiple American voting blocs, especially younger voters.

“Not only are we winning the struggle ideologically, we are also winning it generationally,” Sanders said. “The future of our country rests with young people. In state after state, whether we won or whether we lost, the Democratic primaries or caucuses, we received a significant majority of votes, sometimes an overwhelming majority, from people not only 30 years of age or younger, but 50- years of age or younger.

“The future of our country is with our ideas.”

Sanders also took time to criticize the Trump’s administrations response to the COVID-19 pandemic, which has gripped the U.S. in recent months, showing the country to be the new epicenter of the disease. He said the suspension of his campaign was linked to an overall effort to fight the effects of the outbreak and not divide energies on a campaign that does not have the probability of recovering from recent disappointing voting results.

“Today families all across our country face financial hardship, unimaginable only a few months ago,” Sander said. “Because of the unacceptable levels of income and wealth inequality in our economy, many of our friends and neighbors have little or no savings and are desperately trying to pay their rent or their mortgage, or even put food on their table.

“This reality makes it clear to me that Congress must address this unprecedented crisis in an unprecedented way that protects the health and economic well being of the working families of our country, not just powerful special interests.”

Sander took to the Senate floor right before the passing of the historic coronavirus economic stimulus bill to admonish Republican colleagues who fought tooth-and-nail to keep out any extra help for working families beyond the paltry $1,200 checks contained in the legislation. He said he will direct his focus on his work in the legislature and will throw his support behind Biden’s campaign.

He congratulated Biden and called the former vice president a decent man. Biden’s character has recently come under public scrutiny amid serious charges of sexual abuse of a staffer in the 90s when he was a senator, an accusation that Biden denies.

Sanders did well with Arab American voters, excelling in the polls in key districts that contain those voters in Dearborn, Dearborn Heights and parts of Detroit during the state’s March primaries. This support was bolstered by key endorsements from Arab American political notables in Michigan like former gubernatorial candidate Abdul El-Sayed, State Rep. Abdullah Hammoud and several others. However, this was not enough to win him the state on March 10, the same day the first confirmed case of COVID-19 was reported in Michigan.