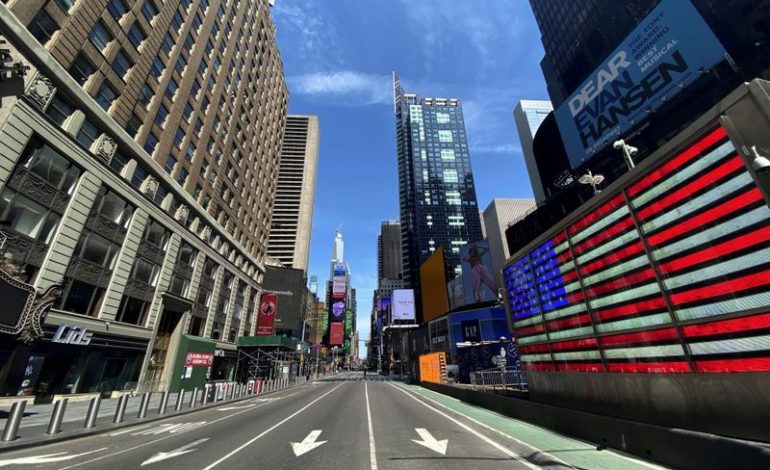 The streets of New York City are shown empty in this Reuters photo, as the death toll has risen throughout the state and country.

NEW YORK — United States deaths related to the coronavirus topped 15,700 on Thursday according to a Reuters tally, as the treasury prepared to issue stimulus checks and deposits to Americans sidelined from their jobs due to the ongoing pandemic and struggling to pay their bills.

The numbers were released as U.S. officials warned Americans to expect alarming numbers of coronavirus deaths this week, even as an influential university model scaled back its projected pandemic death toll in the country by 26 percent to 60,000, a stark contract to recent estimates of between 100,000-200,000 deaths.

Tuesday and Wednesday’s death tolls were new daily records, with more than 1,900 new deaths reported each day. Only Italy had more deaths as of Wednesday than the United States, with 17,668 reported. Spain, meanwhile, had 15,238 deaths while the epicenter of the crisis, China, reported no new coronavirus deaths on its mainland and ground zero of the outbreak, the city of Wuhan, celebrated the end of its 76-day lockdown with an elaborate light show on skyscrapers and bridges.

European countries, including Italy and Spain, have begun looking into easing lockdowns, but their death rates have fluctuated after an initial decline.

Meanwhile in New York City, the U.S. epicenter of the crisis, hospitalizations ebbed while the state’s death toll spiked again.

New cases in hospitals fell to a fresh low of 200 in a sign the disease’s curve was flattening in the state. But Governor Andrew Cuomo warned against complacency with what could be the toughest week of the crisis approaching.

“You can’t relax. The flattening of the curve last night happened because of what we did yesterday,” Cuomo said, referring to the shape of graphs tracking new cases.

A University of Washington model often cited by U.S. and state officials projects that COVID-19, the respiratory ailment caused by the coronavirus, will claim 60,415 lives by August 4, with the peak coming on Easter Sunday this weekend, when it projects that 2,212 will die.

The crisis was compared to the September 11, 2001 attacks in the United States by Cuomo, during which almost 3,000 people were killed at the World Trade Center in New York.

“9/11 was so devastating, so tragic and then in many ways we lose so many more New Yorkers to this silent killer,” he said. “It was a silent explosion that just ripples through society with the same randomness, the same evil that we saw on 9/11.”

Stay-at-home orders have closed non-essential workplaces in 42 states, and have brought entire segments of the U.S. economy to a halt while throwing millions of people out of work.

A total of 6.6 million workers applied for jobless benefits in the week that ended April 4, according to statistics released by the U.S. Labor Department on Thursday.

In all, about 16.8 million American workers have applied for jobless benefits in the past three weeks.

Despite the continuing high death toll, U.S. Treasury Secretary Steven Mnuchin said he believes the U.S. economy could be reopened as soon as next month.

“As soon as Trump feels comfortable with the medical issues,” he said.

He added that the government was doing everything necessary to ensure “that American companies and American workers can be open for business and that they have the liquidity that they need to operate their business in the interim,” Mnuchin said.