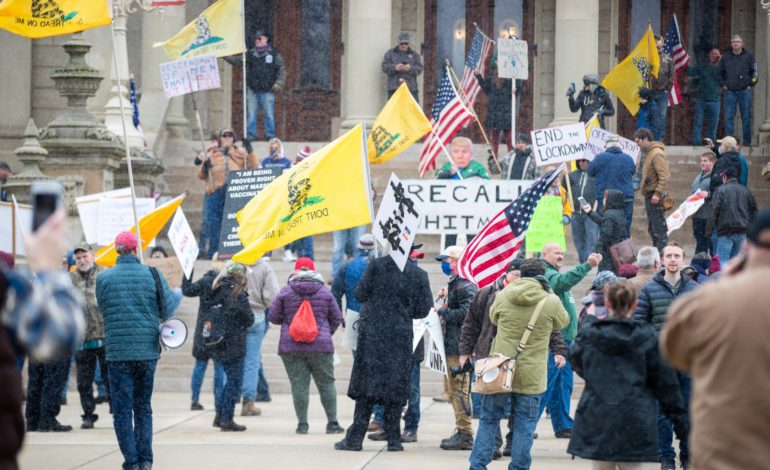 Protesters came together against the state’s “Stay Home Stay Safe” order, outside of the capitol building in Lansing on Wednesday afternoon. All photos: Imad Mohamad/The Arab American News

Many were in violation of the order themselves. Though a large number of protesters chose to rally out of their vehicles, an estimated 100 to 150 protesters could be seen on the capitol’s lawn, some armed and standing shoulder to shoulder in groups, often with no face protection. The state prohibited gathering of more than 50 people as early as mid-March once the outbreak of the coronavirus became a terrifying reality in Michigan.

How were these protesters, many of whom could be seen not following 6-foot social distancing guidelines, able to openly violate the state’s order without any consequences? So far, there is no clear answer.

The state has made it clear over the past few weeks that violations of the order will mean fines of up to $1,000 and/or 90 days in jail for each offense, with the attorney general’s office saying local law enforcement should have the authority to enforce the guidelines if the situation arises.

When asked by The Arab American News whether protesters were dispersed or fined, however, both the governor’s and the attorney general’s offices managed to send back only a canned response, displaying deep disappointment in the armed protesters but with no actual acknowledgement that they indeed had full authority to enforce the social distancing order. The Lansing Police Department was not available to comment as of the writing of this article.

“Governor Whitmer is the governor for all Michiganders and her number one priority remains protecting public health and safety. As Governor Whitmer said yesterday, we’re all in this together, on the same team, fighting against this virus.

“Governor Whitmer understands that this is a frustrating time and that many people are angry. People want to spend time with their families, friends and loved ones. The governor supports Michiganders’ right to free speech and the right to protest, but those participating should not put themselves or first responders at risk.

“It’s disappointing to see people congregating without masks, and without practicing social distancing. People were flying confederate flags and passed out candy to kids without gloves. This kind of activity will put more people at risk, and it could mean that more people will die.”

It’s apparent that the risk associated with such a gathering was known to the state’s government, yet no action was actually taken to stop a reckless and potentially dangerous activity. Attorney General Dana Nessel’s office, which has been issuing cease and desist orders to non-compliant businesses, sent back the following message:

“The right to free speech is the cornerstone of our democracy and we support people’s right to peacefully protest. What Wednesday’s protest ultimately demonstrated, though, is a lack of appreciation for the health and safety of others in our state.

“Each individual who stood at the capitol Wednesday – many in defiance of social distancing – will go home to their families and their communities, putting many others at risk through no fault of their own. The definition of a ‘patriot’ is a person who vigorously supports their country and is prepared to defend it against enemies. Demonstrate your patriotism by caring about the well-being of your neighbors. The enemy here is the virus, not each other. The only way we get through this is together; and the sooner we all join together, the sooner this will be over.”

The state has said that under the order, all public and private gatherings among persons outside a single household remain temporarily prohibited. It has also said though the order does not prohibit people from protesting, they must adhere to social distancing measures recommended by the Centers for Disease Control and Prevention, including remaining at least six feet from people from outside their own household.

As of Thursday evening, there were 29,263 total confirmed cases of the highly contagious coronavirus infection. There are now a total of 2,093 virus related deaths in the state.