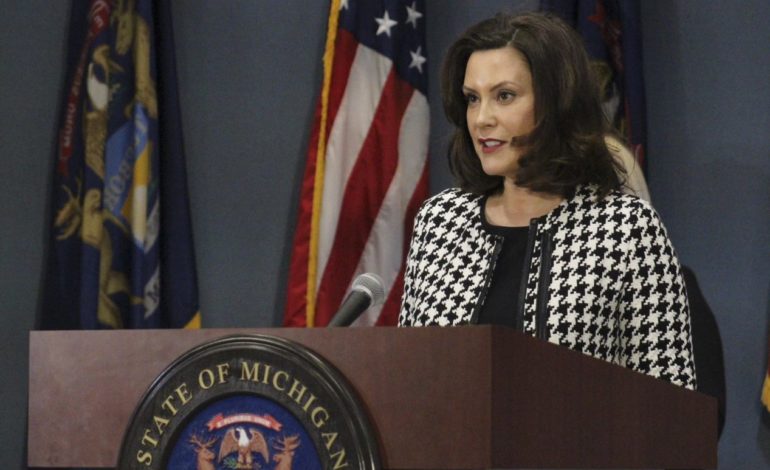 LANSING — Governor Whitmer announced on Monday that she will take a 10 percent pay cut during the COVID-19 pandemic and added that the next 10 days will determine what happens after the expiration of the upcoming April 30 deadline for her stay-at-home executive order.

Whitmer made the announcement during a 3 p.m. press conference from the state capitol, adding that her executive staff will take a 5 percent cut as well. Whitmer made $159,300 in 2019 according to Business Insider, which amounts to a cut of more than $15,000 over a year’s time.

Michigan experienced its fewest cases in a single day since March 26 this afternoon, with 576 cases reported and 77 new deaths. The last time the state had fewer than 600 cases in a day was on March 26.

In addition to Whitmer’s comments, Chief Medical Executive and Chief Deputy Director for Health Dr. Joneigh Khaldun also announced expanded testing for all essential workers in Michigan, including first responders. Even those who don’t have symptoms can get tested for the virus, she said.

Khaldun and Whitmer said cases were beginning to plateau according to a report from Fox 2 Detroit, but cautioned against reopening the state as it could set up Michigan for a possible resurgence in cases.

Whitmer added that she would start releasing details about her plan to reopen the economy next week as well, saying her decision will be based on facts, science and the best medical advice available.

“Social distancing is still crucial,” Whitmer said. “When we start returning to work, we will begin with low-risk sectors. As a state, we may re-engage our strategy by region, depending on what the data tells us.”

Whitmer also announced that she has ordered the creation of a task force to study racial disparities regarding the coronavirus and death rates.

“The COVID-19 pandemic has disproportionately impacted communities of color throughout our state,” Whitmer said in her executive order.

“For example, while African Americans represent 13.6 percent of our state’s population, they represent a staggering 40 percent of the deaths from COVID-19.”

Within the city of Detroit, Blacks have accounted for 77 percent of the deaths.

According to the Centers for Disease Control and Prevention, 30 percent of COVID-19 patients whose race was known were Black.

An Associated Press analysis of state and local data nationwide also found that about 1/3 of all COVID-19 deaths have been among African Americans, with Black people representing 14 percent of the population in areas studied, another sign of a potentially large disparity.

Higher rates of obesity, asthma and diabetes have made the Black community more vulnerable, according to the analysis.

“It’s America’s unfinished business — we’re free, but not equal,” said civil rights leader Rev. Jesse Jackson. “There’s a reality check that has been brought by the coronavirus, that exposes the weakness and the opportunity.”

Watch video of the press conference below: