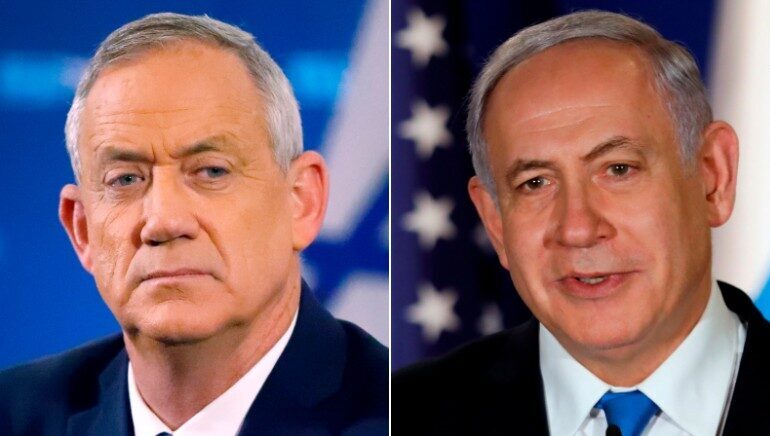 he decision by Benny Gantz, leader of Israel’s Kahol Lavan (Blue and White) coalition, to join a Benjamin Netanyahu-led government is likely to destabilize the political fabric of Israeli society for years to come.

It was intended to be a Machiavellian move, but the decision by Benny Gantz, leader of Israel’s Kahol Lavan (Blue and White) coalition, to join a Benjamin Netanyahu-led government is likely to destabilize the political fabric of Israeli society for years to come.

In a surprising move, Gantz has entered into precarious political compromises, whereby he would become the speaker of the Israeli Knesset (Parliament), as a prelude to the formation of a national unity government which will include the ruling Likud party and Blue and White.

The move, however, proved disastrous.

As soon as Gantz declared his intentions to join hands with Netanyahu, thus throwing the discredited prime minister a lifeline, the Blue and White coalition quickly disintegrated.

Blue and White has stood on shaky ground since its formation to contest the April 2019 general elections. The leaders of the coalition, Gantz (Israeli Resilience Party), Yair Lapid (Yesh Atid) and Moshe Ya’alon (Telem) seem largely unified, not by a common ideological foundation, but by their sheer hatred of Netanyahu and burning desire to oust him.

Netanyahu is Israel’s longest-serving prime minister, with his terms in office linked to an era of nepotism and corruption. Over time, Netanyahu has turned whatever semblance of democracy his country enjoyed into a personal and family affair. In his constant readiness to concede to his extreme right-wing government coalition partners to ensure his own political survival, Netanyahu offered his country little by way of a viable political vision.

For many years, Netanyahu’s enemies did little to counterbalance the prime minister’s excesses. While Netanyahu succeeded in wooing Israel’s right-wing constituency, Israel’s so-called left dwindled to represent, at times, a mere margin of error in Israeli elections and opinion polls.

A telling example is the most recent poll conducted by Israel’s Channel 12 earlier this month. According to the results, if Israelis were to vote in a general election on the day of the polling, the country’s historic Labour Party (which founded Israel in 1948) would fail to garner a single seat at the Knesset.

In retrospect, Gantz and his allies had no other option but to brand themselves as “centrists.” On forming their coalition a year ago, they aimed to appeal to various groups of disgruntled Israelis: Right-wing voters disenchanted with the political deadlock and economic inequality; leftists, who have lost faith in the traditional left’s ability to resurrect itself as a strong oppositional force and the remnants of independent and centrist voters.

Gantz and his allies’ calculations proved to have merit, as Israeli voters came out on three different elections in less than one year to breathe life into what once seemed like an impossible mission: ousting Netanyahu.

In the last March elections, Blue and White has won 33 seats in the Knesset, certainly not enough to form a coalition on their own, but enough to build a relatively stable coalition that would seize control of the Knesset and. ultimately, form a government.

For the first time in years, it seemed that Netanyahu’s political career was over and that the prime minister, who is facing serious corruption charges, will see his day in court, if not prison.

But Gantz faced a dilemma, which eventually resulted into his seemingly erratic decision to form a national unity government with Netanyahu.

To form a government that excludes the Likud, Blue and White would have been forced to include the third-largest political force in the Knesset, the Arab parties which are united under the umbrella of the Joint List.

Despite the Joint List’s willingness to join Gantz’s precarious coalition (which would have included some of the most notorious anti-Arab and racist political figures in Israel, like Yisrael Beiteinu, Avigdor Lieberman), Gantz did everything in his power to avoid that possibility.

Racism in Israel is at its worst, and any political concessions made to Arab parties would have been considered by many Israelis as a betrayal to the “Jewish identity of the State” as enshrined in the chauvinistic “Nation-State Law” of July 2018.

Masquerading his decision as a concession that is compelled by the coronavirus pandemic, Gantz agreed to form an emergency national government with Netanyahu, which excludes the Arab Joint List.

On March 26, Gantz nominated himself for the position of the speaker of the Knesset, replacing the abruptly resigned former Likud speaker, Yuli Edelstein, setting the stage for negotiations with Netanyahu’s Likud regarding the structure of the new government.

Whether Gantz had anticipated the fallout of his decision or not is irrelevant because, consciously, he opted to make a deal with the devil rather than being the Israeli Jewish politician who has paved the road for Israel’s Arab community to be part of the country’s decision-making.

Everything that Gantz has worked for — three consecutive elections and the desperate attempt at carving up a centrist political narrative in a country inclining more to the right — have all come crashing down. Yesh Atid and Telem, two of the three main pillars in the Blue and White, officially filed for, and were granted, permission from the Knesset Arrangement Committee to break away from Gantz’s faction.

Unsurprisingly, if elections were to be held in Israel now, Gantz’s party would win a measly 19 seats — compared with the Likud’s growing popularity of 40 seats.

With the balance of power finally shifting in his favor, Netanyahu has toughened his political stance, insisting on playing a role in the appointment of judges (thus protecting himself from future prosecution) and on his right to block any High Court of Justice decision of disqualifying him from serving as a prime minister.

After failing to reach an agreement, the task of forming the government has been transferred to the Knesset. A failure to do so within 21 days would take the country to a fourth election, one that the Likud and their allies are sure to win, and this time decisively so.

It is ironic that the person who resurrected Israel’s political “center” is the same one who eventually destroyed it. By doing so, Gantz has granted Netanyahu a new lease on life and, consequently, strengthened the Israeli right’s grip on power for years to come.