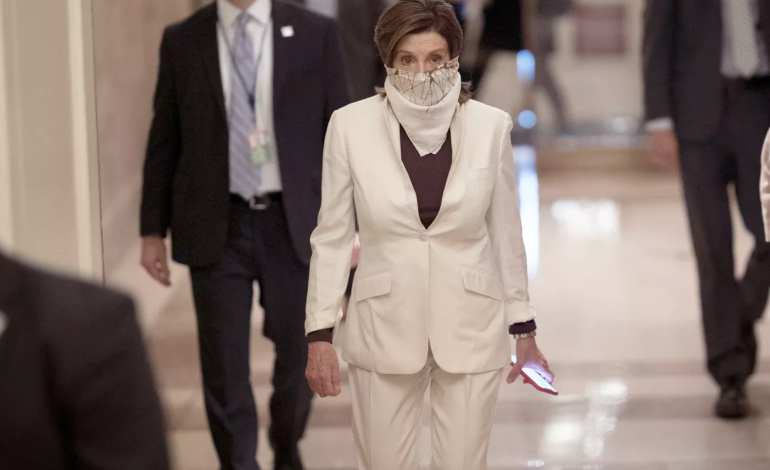 House Speaker Nancy Pelosi arrives at the U.S. Capitol, wearing a scarf as a face covering.

WASHINGTON, D.C. — The House of Representatives passed a $484 billion bill to expand federal loans to small businesses impacted by the coronavirus outbreak, as well as hospitals that have suffered during the crisis financially.

The vote passed by a total of 388-5 on Thursday, after it was unanimously approved by the Senate on Tuesday, and was expected to head to President Trump for signing into law.

The news broke as the U.S. death toll attributed to the coronavirus was expected to pass the 50,000 mark by week’s end and unemployment numbers rose to more than 26 million people nationwide.

Sixteen states released formal plans to reopen the economy, according to Vice President Mike Pence, including ambitious plans from Georgia to reopen businesses by Friday. These included gyms, barbershops, fitness centers and bowling alleys that Trump said were “just too soon.”

The bill was approved by a voice vote by the handful of senators present in the near-empty chamber. The fourth coronavirus-response law, the measures amount to about $3 trillion in aid since last month to confront the crisis. More than 43,000 deaths attributed to COVID-19, the respiratory disease the virus is capable of causing, have been recorded thus far in the United States.

Trump had previously encouraged Congress to move quickly to approve the measure, which mainly expands funding for loans to small businesses, leaving additional aid to state and local governments for a later bill.

Previously, nearly $350 billion in loans was provided to small businesses impacted by economic fallout from the coronavirus that could turn into grants if certain requirements were met, but that funding was quickly exhausted.

Critics of the program said too much of the money went to larger, more well-connected businesses. On Monday, the burger chain Shake Shack, Inc. said it would return a $10 million loan it received after coming under public criticism.

Senate Democratic leader Chuck Shumer said $125 billion of small business funds in the latest package would go to “mom and pop” and minority-owned stores, according to a report from Reuters.

The deal includes $321 billion for a small business lending program, $60 billion for a separate emergency disaster loan program, also for small businesses, and $75 billion for hospitals. Another $25 billion will go toward national coronavirus testing. The U.S. reported on Monday that more than four million people have been tested thus far for the virus.

According to Fortune Magazine as of Thursday evening, the Small Business Administration had not said when its processing system, E-Tran, would reopen and allow businesses to send applications through for approval.

The SBA did not respond to a request to comment on when the system would open again. Information can be found in the coming days by visiting www.sba.gov.

A fifth bill is also being worked on that could be “similar in size” to the $2.3 trillion economic stimulus passed on March 27.