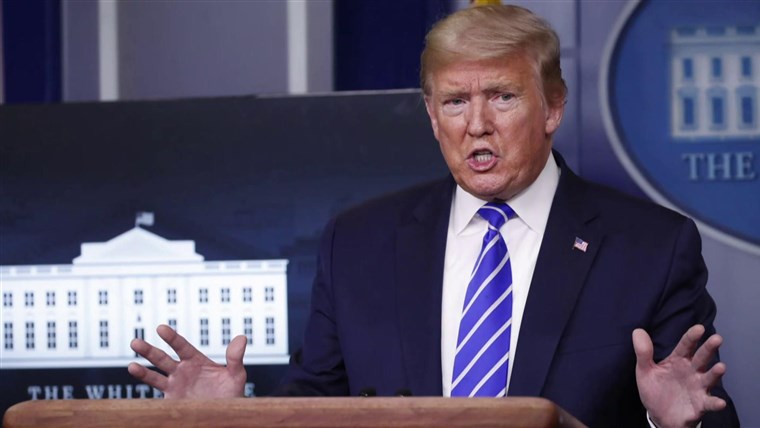 NEW YORK CITY — Calls to New York City’s Poison Control Center for exposure to certain household chemicals more than doubled after President Trump suggested an injection of a disinfectant chemical might be one way to combat COVID-19, the city said on Saturday, according to a report from NBC4 New York.

In the 18 hours after the president made the suggestion during a Thursday night news conference, the city center got 30 exposure calls, nine about Lysol, 10 about bleach and 11 others about household cleaners.

Two people in Illinois also called the Poison Control Center’s hotline to report “inappropriate exposure” to disinfectants, according to WCIA, a CBS affiliate.

Trump did not specifically say injecting or using bleach or Lysol by name.

The full transcript of his comments are as follows, from the website Politifact.

“A question that probably some of you are thinking of if you’re totally into that world, which I find to be very interesting. So, supposedly we hit the body with a tremendous, whether it’s ultraviolet or just very powerful light, and I think you said that hasn’t been checked, but you’re going to test it. And then I said supposing you brought the light inside the body, which you can do either through the skin or in some other way (To William Bryan, undersecretary for science and technology at the Department of Homeland Security). And I think you said you’re going to test that, too. Sounds interesting, right?

“And then I see the disinfectant, where it knocks it out in one minute. And is there a way we can do something like that, by injection inside or almost a cleaning, because you see it gets in the lungs and it does a tremendous number on the lungs, so it’d be interesting to check that, so that you’re going to have to use medical doctors with, but it sounds interesting to me. So, we’ll see, but the whole concept of the light, the way it kills it in one minute. That’s pretty powerful.”

Later, Trump clarified his comments after a reporter asked Bryan whether disinfectants could actually be injected into COVID-19 patients.

“It wouldn’t be through injections, almost a cleaning and sterilization of an area. Maybe it works, maybe it doesn’t work, but it certainly has a big effect if it’s on a stationary object.”

There is some speculation that Trump’s comments could refer to ozone therapy, which is used by some holistic health clinics.

Following Trump’s remark, social media posters mocked his suggestion, which Trump defended as being “sarcastic”, and conflated it with drinking bleach or Lysol.

Trump’s remarks were met with widespread condemnation, with health officials rushing to warn the public not to listen to his suggestion and that they should not ingest or inject disinfectant, bleach or other potentially harmful chemicals.

The maker of Lysol, the British company RB, also issued a statement urging the public not to consume its products. The CDC, the Clorox bleach company and EPA also rushed to issue statements after Trump’s comments.

None of the 30 calls received by Poison Control resulted in a death or hospitalization, the report said. Compared to the same time window last year, there were a total of 13 exposure calls, with two involving bleach but none involving Lysol-related products according to a report from Forbes.

Poison control centers across the U.S. had already been reporting an alarming rise in people exposing themselves to dangerous cleaners, especially bleach, and drugs in recent weeks.

On Monday, the CDC reported that there had been a rise of approximately 20.4 percent in calls to poison centers from January to March, mostly due to accidental exposure to cleaners and disinfectants, when compared to the same period in 2019.

The headline of this article originally made reference to Trump advocating for the injection of Lysol. Trump did not mention Lysol or bleach specifically by name; he only said disinfectant.

We have updated the article to reflect this correction, and we apologize for the mistake.