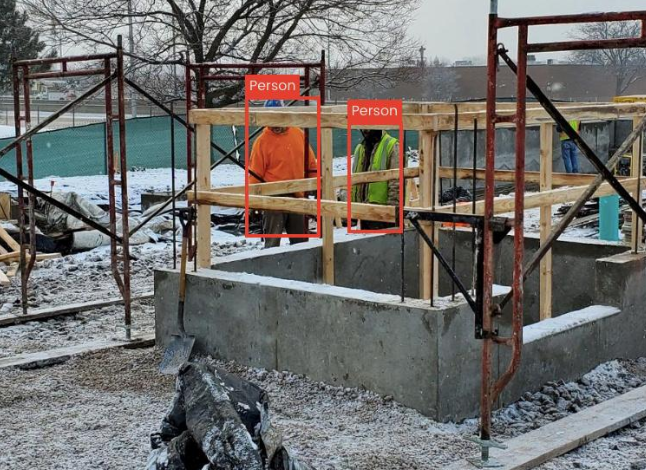 A photo illustration provided by Pepper Construction shows how technology from startup SmartVid.io is used to analyze images from the construction site for Oracle Industries Innovation Lab in Deerfield, Illinois to see whether workers are adhering to safety measures, including social distancing. Pepper Construction/Handout via REUTERS

OAKLAND, CA — Stores and work places are beginning to equip existing security cameras with artificial intelligence software that can track compliance with health guidelines and social distancing, according to a report released Monday.

The software will allow them to show workers, customers, ensurers and regulators that they are enforcing safe practices.

“The last thing we want is for the governor to shut all our projects down because no one is behaving,” said Jen Suerth, vice president at Chicago-based Pepper Construction, which introduced software from SmartVid.io this month to detect workers grouping at an Oracle Corporation project in Illinois.

Two Michigan shopping centers owned by RPT Realty will have distancing tracking from RE Insight in two weeks as well.

Similar tools have also been used to profile shoppers enter stores and to find helmet scofflaws on construction sites.

Some technology consults have advised using the technology at such a chaotic time, and investing in a new technology that may only be used for a period of months, however.

Privacy advocates are concerned about increasingly detailed tracking of people and are urging businesses to limit the use of AI systems.

The technology may be used at a later time to prevent shoplifting according to Al Gidari, a privacy expert at Stanford Law School.

High tech AI-based surveillance and tracking technology on the rise

Reuters spoke with 16 video analytics companies on new offerings related to the coronavirus. Many of their systems can be used to gather large amounts of data on customers and may even have the capability to detect and prevent large groups of people from gathering at workplace sites.

Their systems can be set to produce daily reports, which site managers can use to “correct recurring problems and document compliance,” the news organization found.

Most are created with a branch of AI technology known as computer or machine vision in which algorithms are trained on image libraries to identify objects with confidence of 80 percent of higher.

Employees who are tagged by the software as not having masks could be offered one by company staff.

“It will surely be helpful for the safety of employees and their comfort level, and it will be helpful to show it to authorities that we are adhering” to regulations, said Samarth Diamond manager Parth Patel.

The goal is to collect as much data as possible from employees to enforce social distancing and other rules.

“You can never have too much data at your hands,” said RPT CEO Brian Harper.