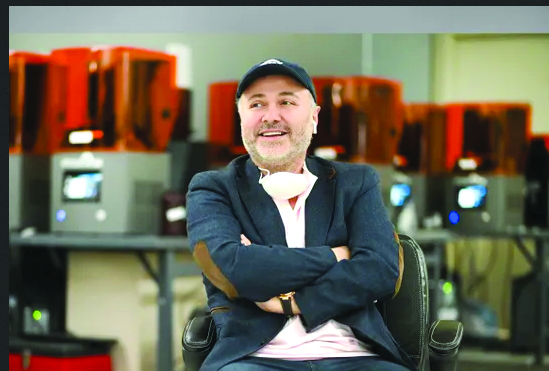 Ali Siblani, founder and CEO of EnvisionTEC, sits among many 3D printers making flexible nasal swabs at his Dearborn plant on Tuesday, April 21. - Photo by Max Ortiz, The Detroit New

Gov. Whitmer said reopening Michigan’s economy is slowed by a shortage of COVID-19 tests to screen employees reentering workplaces, and she blames the Trump administration for not responding to states’ needs.

Dearborn businessman Ali Siblani said he can make all the test swabs Michigan requires and he blames the state bureaucracy for creating an artificial shortage.

“As of this minute, I’m scaling up to make 1 million swabs a day,” said Siblani, owner of EnvisionTEC, which he says is the third largest 3-D printing medical manufacturer in the world. “I can cover the state’s requirements. But I can’t get the state’s attention. They’re not responding in Lansing.”

Siblani switched to making Nasopharyngeal (NP) swabs a few weeks ago and has been sending 200,000 a day, he said, to the University of Michigan, Henry Ford Health Systems, the city of New York and hospitals in Chicago, Boston and elsewhere. He said his swabs have been tested and approved by the Food and Drug Administration.

Swabs are the critical piece of the COVID-19 test process and are in short supply nationwide. Making them on 3-D printers has come in response to the shortage.

Siblani approached the governor’s office about his swabs and finally was asked to send samples for testing. But he’s heard nothing. Bob Wheaton, a spokesman for the Department of Health and Human Services, said Michigan follows a careful process for vetting medical supplies before making a purchase, particularly when new technology is involved.

“Because 3D-printed swabs are new technology, MDHHS is undergoing due diligence to ensure every possible product meets all of the best safety and accuracy standards for the people of Michigan,” Wheaton said. “The department appreciates the work that EnvisionTEC is doing during a time in which it’s vitally important that COVID-19 testing be expanded.”

Fair enough. But Siblani said he developed his product with guidance from Harvard University, and the swabs are already in use in a lot of places. In times of crisis, some red tape has to be cut to rush solutions, particularly when it means getting people safely back to work.

But still no orders from a state whose governor who said on Sunday a shortage of testing supplies is the major impediment to restarting Michigan.

“It’s really dumb that I’m a Michigander and I’ve got swabs and the state isn’t taking them,” said Siblani, who has been in business for 18 years and specializes in medical equipment. “It’s dysfunctional.”

Whitmer is among the loudest critics of the Trump administration’s mishandling of the COVID-19 response. And it may have been mishandled, but she should focus on her own shop.

From long delays in taking unemployment claims to botching the procurement of supplies, to poorly communicating the reasons for her executive orders, there’s plenty wrong in Michigan, too.

The governor penned a “woe is me” op-ed for The New York Times on Wednesday, bemoaning the tough decisions she’s had to make.

But tough doesn’t always equate to effective. As Siblani’s experience shows, Michigan could and should be doing better.

— Nolan Finley is the editor of The Detroit News editorial page. He can be reached at: nfinley@detroitnews.com. Twitter: @NolanFinleyDN