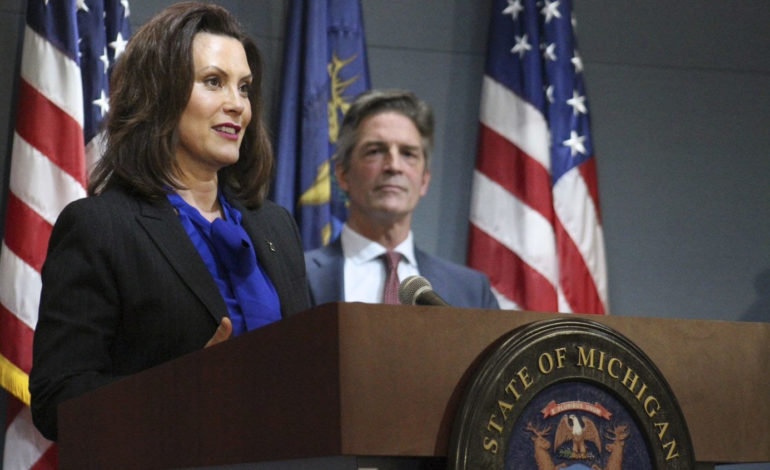 Whitmer was joined by Michigan Department of Health and Human Services (MDHHS) chief exec Dr. Joneigh Khaldun and business leaders Gerry Anderson, executive chairman of  DTE Energy, and Wright Lessiter, president and CEO of the Henry Ford Health System. Anderson and Lessiter are part of a joint committee of health and business representatives making recommendations for the state’s reopening plan.

Whitmer talked of her government’s latest actions, including new requirements for checkout employees at grocery stores to wear some form of face covering. She also announced an additional $310 billion in forgivable Paycheck Protection Program (PPP) loans for businesses. More information on these loans can be found on mypaycheckprotection.com

Unveiled as the “’MI SAFE START’ Plan to Reopen the Economy in Planned Stages”, the new strategy will rely on data about potential upticks of COVID-19 cases in the state in order to avoid hot spots from forming. It will also increase and mandate workplace protective measures in the industries that reopen

“Over the past weeks, we watched the number of new cases slowly decline,” Whitmer said. “We are not out of the woods yet, but we are seeing signs that give us reason to be feeling optimistic, cautiously, but optimistic nonetheless.

“Now we are in a position to start thinking about what the future looks like. In the coming weeks, we will continue reengaging sectors of our economy and putting more Michiganders back to work. I’m gonna sound like a broken record, but we have to be really smart; we have to get this right.” We will monitor public health and we will measure our success every step of the way. We’ll also remain nimble enough to pull back if the data tells us that’s the prudent thing to do, if we see a spike or we’re concerned about hospital capability of meeting need. — Governor Whitmer

The plan will take into account geographic and work-place risks when determining which parts of the economy to be open first. As such, Whitmer said that the construction industry will most likely be one of the first to reopen. The state is relying on advice from healthcare, business and labor experts to make broader determinations. She promised more updates on planned reopening of other sectors at a future date.

“We will monitor public health and we will measure our success every step of the way,” Whitmer said. “We’ll also remain nimble enough to pull back if the data tells us that’s the prudent thing to do, if we see a spike or we’re concerned about hospital capability of meeting need.”

Whitmer said there was no hard-and-fast timeline for reopening and that activities will be monitored over weeks as they resume, to determine whether a further expansion can occur in that area.

In other news, the Trump administration, now bolstered by nationwide anti-lockdown protests, deployed its federal prosecutorial arm to continue its attack on Michigan’s Democratic governor. On Monday, U.S. Attorney General William Barr sent out a memo, which orders U.S. attorney for the Eastern District of Michigan Matthew Schneider to conduct an investigation into the constitutionality of COVID-19 related state and local policies.

“Many policies that would be unthinkable in regular times have become commonplace in recent weeks, and we do not want to unduly interfere with the important efforts of state and local officials to protect the public,” the memo said. “But the Constitution is not suspended in times of crisis. We must therefore be vigilant to ensure its protections are preserved, at the same time that the public is protected.”

Barr added that if a state or local ordinance is found to be an unconstitutional and inappropriate use of authority, the Department of Justice will be forced to take action, which may come in the form of a lawsuit. State governments have sovereign authority and can make decisions on when to reopen their economies without interference from the federal government, which is how such a lawsuit will be challenged in court.