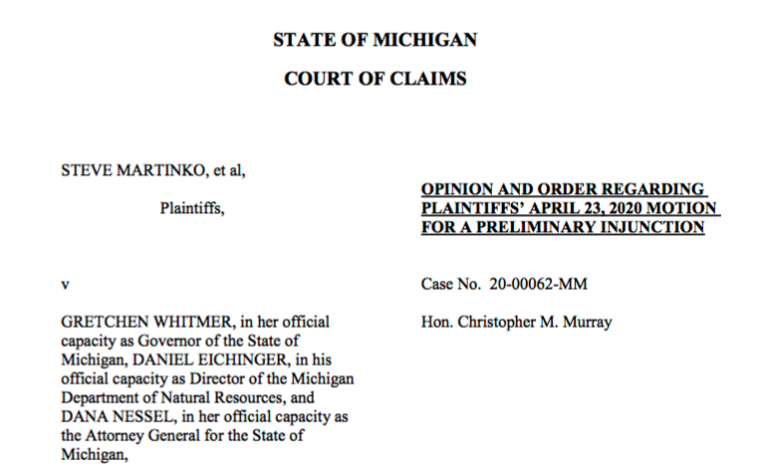 LANSING — While the U.S. Department of Justice seeks probes into the constitutionality of lock-down orders in various states, including Michigan, Lansing announced on Wednesday a Michigan Court of Claims ruling that sided with Governor Whitmer, holding that the current “Stay Home, Stay Safe” executive order did not infringe upon the constitutional rights of Michigan residents.

Attorney General Dana Nessel announced that the court also held that earlier versions of the “stay home” order did not violate constitutional rights, either. The court denied a motion for a preliminary injunction brought up by plaintiffs Steve Martinko et. al. The plaintiffs claimed that the “mandatory quarantine” imposed by the Stay Home, Stay Safe order (EO 2020-59) and the intrastate travel restrictions contained in an earlier version of the order (EO 2020-42) violate their rights to both procedural due process and substantive due process.

“Although the Court is painfully aware of the difficulties of living under the restrictions of these executive orders, those difficulties are temporary, while to those who contract the virus and cannot recover (and to their family members and friends), it is all too permanent,” Court of Claims Judge Christopher Murray concluded.

In the first substantive ruling examining the constitutionality of the executive orders, Murray acknowledged in his opinion that the rights asserted by plaintiffs are fundamental. In his published decision, he said that in such a case, the interests, health and well-being of all Michigan residents had to be taken into account as well:

“But those liberty interests are, and always have been, subject to society’s interests – society being our fellow residents. They – our fellow residents – have an interest to remain unharmed by a highly communicable and deadly virus; and since the state entered the Union in 1837, it has had the broad power to act for the public health of the entire state when faced with a public crisis.”

Murray stated that issuing injunctive relief “would not serve the public interest, despite the temporary harm to plaintiffs’ constitutional rights.”

The plaintiffs also alleged that the Emergency Management Act is an unconstitutional delegation of legislative power to the governor, but the Court noted the act does not provide Whitmer with “uncontrolled, arbitrary power.” Instead, Murray indicated that the act provides for very specific procedures and criteria for the governor to declare a state of disaster or emergency, and what conditions qualify as a disaster or emergency.

“I am pleased with the court’s decision,” Nessel said. “This pandemic has already taken more than 3,600 lives in Michigan and many more around the world. The primary goal of the Stay Home, Stay Safe order has always been to protect human life.”