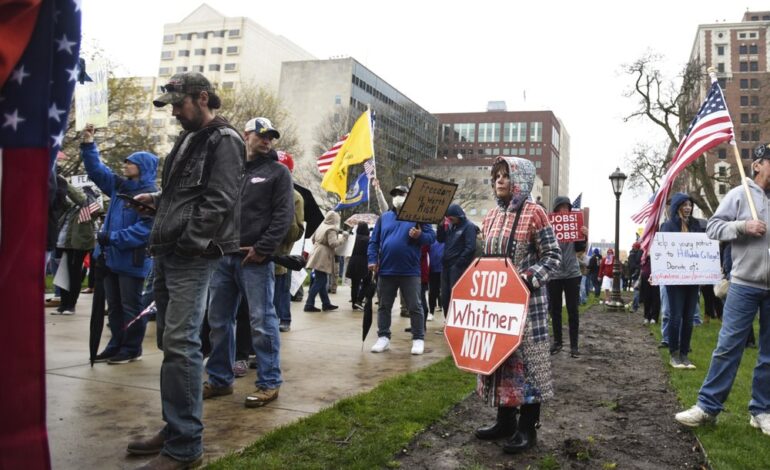 LANSING — On Thursday, as another wave of protesters converged on the state’s capitol, Michigan Republicans refused to extend Governor Whitmer’s emergency declaration and voted to authorize a lawsuit challenging Whitmer’s authority and actions to combat the pandemic.

Whitmer’s emergency declaration expired on Thursday. The governor sought a 28 day extension of her declaration. Whitmer has said she has other powers to respond to the crisis, according to the Associated Press, and does not need a legislatively-approved extension except to ensure that health care workers would continue to have special legal protections. Whitmer has also said the state of emergency will continue regardless.

The declaration is the basis for Whitmer’s “stay home” order and other directives aimed at slowing the spread of the coronavirus. The “stay home” order will remain in effect until May 15. The House and Senate voted along party lines for a bill that would temporarily codify many of Whitmer’s orders, but not her stay-at-home directive. This means that restaurants, bars, casinos and other places of accommodations could have begun in-house services by May 16.

Under the legislation, which Whitmer promised to veto, reopened business would have still adhered to social distancing and other safety measures until May 30.

Hundreds of protesters again took to Lansing on Thursday, this time entering the State Capitol Building and demanding entry to the House floor. Many openly but legally carried guns inside of the building and were without face protection. They were stopped by a line of Michigan State Police officers. Many not only lacked masks, but could also be seen openly violating social distancing requirements.

No tickets were issued and no arrests were made for the violations, even though the mayor of Lansing promised enforcement last week. Protesters carried pro-Trump signs and demanded an immediate reopening of the economy. The Arab American News was unable to get a comment from Attorney General Dana Nessel’s office about the social distancing violation at this time.

Whitmer rejected Michigan Senate Republican proposals for a pair of one week extensions of the emergency in exchange for giving the body a say in any future “stay home” restrictions. Republicans want Whitmer to give a clear date for reopening the economy on a regional basis, which Whitmer included in her plan to reopen the economy on Wednesday. Republicans have also sought an end on bans on non-essential, or elective, medical procedures.