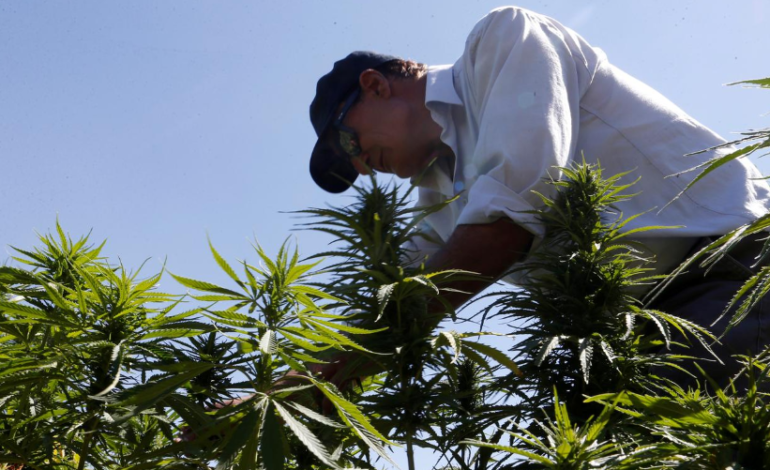 FILE PHOTO: A farmer is seen tending to cannabis plants in a field in the Yammouneh area west of Baalbek, Lebanon, August 13, 2018. REUTERS/Mohamed Azakir

BEIRUT — The Lebanese parliament has legalized cannabis farming for medicinal use, a potentially lucrative export for an economy in dire need of foreign currency as it struggles through a paralyzing financial crisis.

Cannabis has consistently been farmed openly in the fertile Bekaa Valley, although growing it has long been illegal in the country.

The Lebanese Parliament’s decision was “really driven by economic motives, nothing else,” said Alain Aoun, a senior MP in the Free Patriotic Movement founded by President Michel Aoun.

“We have moral and social reservations, but today there is the need to help the economy by any means,” he told Reuters.

The move would open up an additional revenue stream for the government and help develop its agricultural sector while legalizing cultivation, which was going on illegally already, he added.

“We don’t want to speculate on numbers…but let’s say it is worth a try.”

Hezbollah was one of the only parties to oppose the legislation, which was approved in a session April 21, the Reuters report said.

The idea of legalizing cannabis in Lebanon for producing medicinal products for export was explored in a report by consultancy firm McKinsey, commissioned by Lebanon in 2018.

About 25 tons of hashish were confiscated by Lebanese police in the country’s biggest drug bust to date. The cannabis was set to be smuggled to an African state.

The new law allows for the cultivation of cannabis up to 1 percent THC for medical purposes, according to a report from HempIndustryDaily.com.

The most popular forms of low THC products in the United States include cannabis oil, or CBD oil, which is said to aid people suffering from seizures, anxiety and other similar conditions among people who have difficulty relaxing.

Cannabis oil products with low THC numbers such as these do not produce any psychoactive effects in those who consume them.