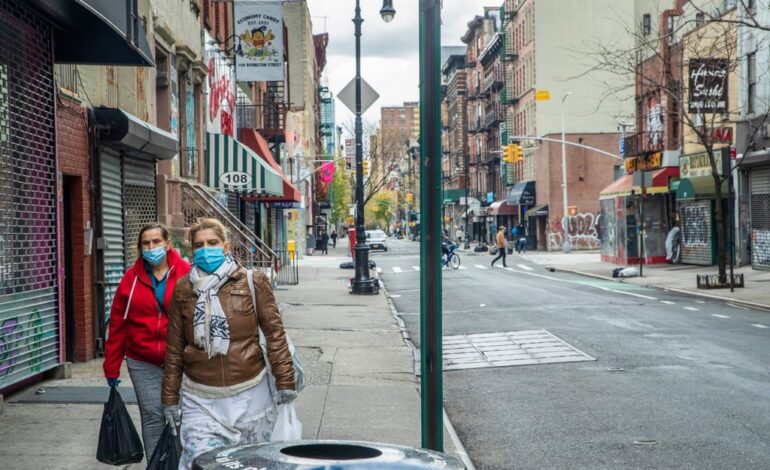 Residents walk through a Manhattan neighborhood during the crisis. Photo via Brittany Newman/New York Times

WASHINGTON, D.C. — Initial White House social distancing guidelines were set to expire on Thursday, with about half of all U.S. states pressing ahead with plans to ease restrictions on business and social life, including Michigan.

The enormous pressure placed on states to reopen was highlighted by new data from the Labor Department showing that around 30 million people had sought unemployment benefits since March 21, or more than 18.4 percent of the working-age population.

Some states said they were planning to ease restrictions without utilizing the “Opening Up America Again” safeguards the Trump administration had recommended on April 16, including declines in the infection rate and expanded virus testing.

Dr. Anthony Fauci, director of the National Institute of Allergy and Infectious Diseases, warned states not to move too fast.

“You can’t just leap over things to a situation where you’re really tempting (the virus) to rebound,” Fauci, a White House coronavirus task force member, told NBC’s “Today” show. “That’s the thing I get concerned about. I hope they don’t do that.”

On Wednesday, Fauci said that the new experimental drug remdesivir would become the “new standard of care” for COVID-19 patients. The number of cases is still climbing in many parts of the country, although peaks appear to have been reached in New York state, the epicenter of the U.S. outbreak, and other places.

Nancy Pelosi, the speaker of the U.S. House of Representatives, said that many states still do not have enough testing capacity, which most experts say is a prerequisite for a safe reopening.

“What will give people confidence to go into the work force — (is) that they know that their coworkers had been tested and cleared to be there,” Pelosi said at a news conference.

The largest state to ease some of the restrictions that have crippled business activity is Florida, which did so on Wednesday.

“There is a light at the end of the tunnel,” Governor Ron DeSantis said as he unveiled phase one of plan set to start on Monday to relax the mandatory workplace closures and stay-at-home orders. Texas joined in, and New Jersey planned to allow state parks and golf courses to reopen on Saturday.

In California, however, Governor Gavin Newsom announced the closure of Orange County beaches and parks in the southern part of the state after crowds jammed the popular shoreline last weekend, Reuters reported. Curbside retail, manufacturing and other “lower-risk workplaces” should reopen within weeks as testing and contact-tracing improve, Newsom said.

Meanwhile in New York, the iconic 1,000 bed hospital ship Comfort steamed out of Manhattan on Thursday after a month-long stay.

Its extra capacity was never needed, allowing it to return to its home base in Norfolk, Virginia.

Governor Andrew Cuomo, whose high profile spats with President Trump made national headlines, announced that New York would hire thousands of people to trace the contacts of those who tested positive. He also announced a halt to New York City subway service from 1 to 5 a.m. to disinfect trains.