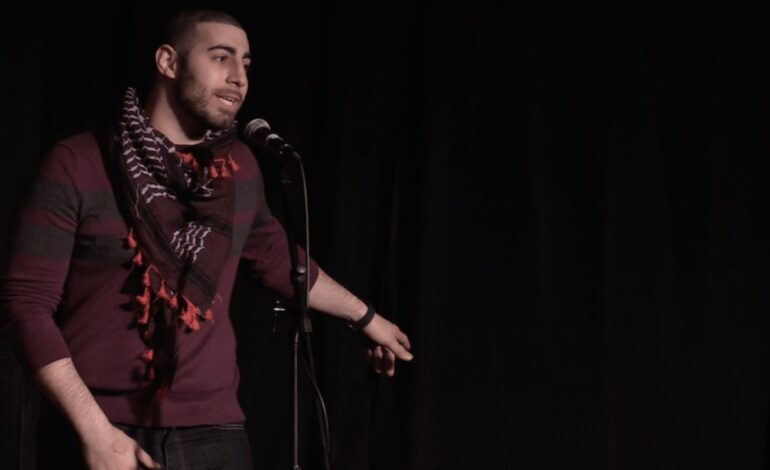 Acclaimed Arab American poet Tariq Luthun was born in Dearborn and has visited family in Gaza.

“How the Water Holds Me”, the first collection of poetry by Detroit-based and Dearborn-born community organizer and Emmy Award-winning poet Tariq Luthun was released late last month, after which it quickly found its way onto top 10 lists for both Amazon new releases and small press distribution.

The book’s release came as a part of National Poetry Month and Arab American Heritage Month, and is directly linked to Luthun’s love for water and Palestine, where much of his family currently resides.

“I love water, I’ve been to a lot of places and I noticed that for me,” he said. “I feel such comfort in water I don’t feel in other places, especially being from Gaza, a place so directly tied to water.”

Following the book’s release, Luthun announced in a statement that he will be donating all royalties to an organization dedicated to supporting Palestinians.

“I am blessed to be in a position where I can translate my poetry into support I, personally, feel is more tangible,” Luthun said. “As a result, I am beyond grateful to share that all royalties from my book, ‘How the Water Holds Me’ (Bull City Press) will be donated to organizations dedicated to supporting Palestinians, with a focus on those on the ground in Palestine.”

Luthun, who just turned 29 last month, began working as a reporter in college, but he kept his love for all forms of literary expression, using poetry to provide a level of sensation, experience and an eye for detail that is usually lacking in news reports.

“My poetry became a form of journalism, I try to use it to document history in an artistic way,” he said. “There aren’t really textbooks out here dissecting the depths and nuance of the narrative, especially of an oppressed people (in Palestine).

“Art has been a way to not necessarily replace media, but to augment it with more texture we haven’t been able to receive otherwise.”

The medium also allows Luthun and fellow poets to reach people who might otherwise be turned off to politics, he said.

Topics include the Nakba (also known as the “Catastrophe”) in Palestine, as well as other stories of colonialism and oppression, including in Hawaii, where Luthun toured an area where natives had resisted foreign government control and the damaging of pristine local lands.

“On the last day of my trip to Hawaii, we did a detour and they showed me the non-touristy side of Hawaii, the ways the U.S. military occupied and annexed and used the land in a way that has damaged it,” he said.

Thus far, the book has received favorable reviews and praise from his contemporaries.

“Luthun’s poems are vulnerable confessions and whispered conversations about becoming, and continuing to become, a young man, a Palestinian, an immigrant, a witness, and a fighter,” said notable attorney-activist Noura Erakat about “How the Water Holds Me.”

For Luthun, who still has a passport allowing him to travel to Gaza, which has been blockaded and besieged by Israel since 2007, the poems carry a personal signature that is unmistakable.

Luthun once played soccer with family members on the same beach near Gaza City that was hit with an Israeli drone strike in 2014, killing four children in the process.

Israel exonerated itself over the killings.

In the poem, “The Summer My Cousin Went Missing”, Luthun described the “general feelings of helplessness and weirdness around having to navigate loss even if it’s not a loss tied to you by blood.”

While Luthun currently resides in the Metro Detroit area, he said that everything he writes has been influenced by Palestinians, including one of his favorite poets of all-time, Mahmoud Darwish.

Despite the mature and at times unsettling themes, he strives to paint a positive picture.

“I think that the act of living life is my fuel for writing,” he said. “And inadvertently creating something for the future life around you.”

Luthun’s vision for promoting the new book has taken a hit due to the coronavirus situation, but he plans to make up for lost time when he gets the chance.

“When everything dies down with this virus and hopefully gives way to a healthier way of existence for people, I will try to do more events,” he said. “In the meantime it’s just so hard to navigate and focus on anything that’s going to happen.

“I’m just worried about being from Gaza, how people are navigating the virus there.”

For more information on Luthun and his work, visit his website TariqPoetry.com.