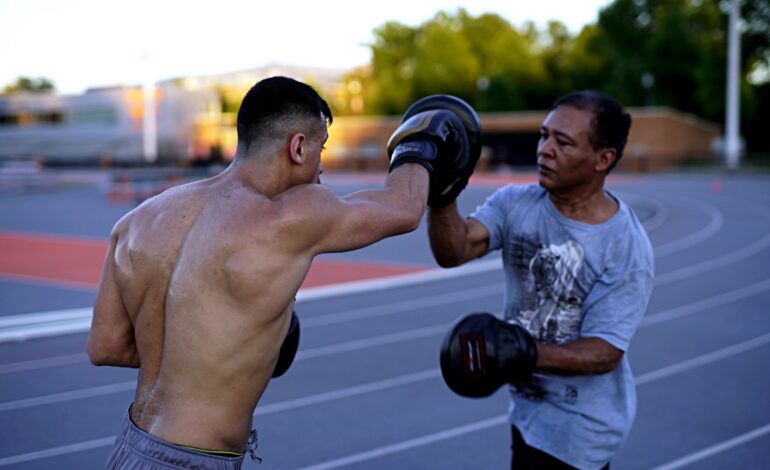 Esam Abid, left, works out with his trainer and "uncle", Michael Evans. Photo via Esam Abid

KNOXVILLE, TN — When 22-year-old Esam Abid first moved to Tennessee from Turkey by way of his native Iraq, the going was a bit rough.

“It was a little difficult at first not speaking the language,” said Abid, an aspiring Olympic boxer who is currently in his third year at the University of Tennessee in Knoxville, studying civil engineering.

“But eventually I started learning it and making friends. The people in the south are very welcoming.”

For Abid, who originally began his athletic career as a soccer player, the going was about to get even tougher — and he wouldn’t have it any other way.

Abid moved in with his “uncle” and current trainer, Michael Evans, and began training “seven days a week”, pursuing a career that has become like a full-time job, fueled by Abid’s aspirations of being the best.

Abid also now works for GEM Technologies in the city, juggling his full schedule with the help of the man who helped build him up into one of the most promising amateur boxers in the country.

“He’s like my father figure right now,” Abid told The Arab American News about Evans, who is not related by blood. “I started living with him, started going to tournaments, winning a lot of tournaments all over the country.”

Standing 5′ 11″, Abid fights at 141 to 154 lbs., using his length, elusiveness and diverse, ambidextrous skillset to frustrate other, shorter boxers in his weight class.

“I’m right handed, but I can fight both, I can switch from one side to another,” Abid said, describing his style. “I’m a boxer, I like to move…I’m a puncher.”

The aspiring Olympian, who’s training to be a member of Iraq’s national team, grew up a fan of Muhammad Ali — whom he calls the greatest of all-time, echoing the sentiments of many boxing analysts — as well as British-Yemeni sensation Prince Naseem Hamed, Sugar Ray Leonard, Sugar Ray Robinson and Roberto “Hands of Stone” Durán.

He’s planning to compete for a spot in the July 2021 Olympics in Tokyo, which have been postponed because of the coronavirus. Abid was expected to compete for the spot this year in Asia, but he’s been forced to take a detour due to the pandemic.

Despite his inability to spar with other top caliber boxers from around the world, as he has often done, he’s using the time off to work even harder on other areas of his game, namely conditioning.

“I have a really good coach, he’s really been pushing me hard,” said Abid, who has been mostly running during the pandemic due to social distancing rules.

“My goal is the Olympics. I want to bring home the gold.”

From tragedy, war and destruction to triumph

Growing up in war-torn Iraq, Abid said he saw “incredible devastation, destruction and human tragedy” all around him.

Despite the horrors he witnessed, Abid said his experiences in his home country are “the key” to his mental toughness.

“My adolescent mind tried to understand and cope with the incessant day-to-day trauma and turbulence,” he said. “Living under these conditions and circumstances brought to the forefront my survival instincts.

“As such, I am naturally and deceptively very aggressive, but in a controlled manner (I turn it on and up as the situation requires).  In addition to this, I have been blessed with a very high tolerance to pain, far beyond that of my competitors.”

His ability to adapt has been cited as one of his biggest strengths by one of his trainers, Sean Wynne. Wynne, a long-time swimmer who competed for state championships in Florida, said Abid jumped in the pool with him and began competing from the get-go, unlike many others he’s seen who back down from similar challenges.

Abid’s work ethic and adaptability are just part of why Wynne believes he has a shot at the Olympic spot.

“He can hardly swim and he jumped in the pool and started doing what I was doing,” Wynne said. “A year later he’s turned into a decent swimmer from almost nothing.

“A lot of people, you throw, something at them and they become uncomfortable and they’re just like, ‘I’m out’, but that’s not Esam. You can throw anything you can think of at him; and if he can see it making him better, he’s on board.”

Abid’s father worked hard to send him, his mother, sister and three brothers to the United States, sacrificing “his emotions, finances” and time for the family to be sent to a safer place despite the fact that he had to stay behind.

Abid said his difficulties with the American language and foreign status brought attention from the school bullies, but he fought back and quickly taught them a lesson.

“They would make attempts to try and intimidate me,” he said. “But, unfortunately for them, they quickly learned I was not the one to be pushed around or disrespected.”

Abid began immersing himself in athletics, including soccer at the YMCA, where he met Jason Evans, a Brazilian self defense student who introduced him to his father, the boxer and trainer who would take him in as his own and help him pursue has dream.

“Michael Evans began to work with me every day, after school for me and after work for him,” he said. “His philosophy was that boxing is more than brute force, endurance, strength and skill, but an art.

“An art understood only by a very few of the elite.”

As Abid continues his journey, he has his sights on the 2021 games, and the top junior welterweight spot on the Iraq team.

A natural born athlete and competitor, Abid said he gets much of his motivation from one of Evans’ signature quotes on life and sports alike.