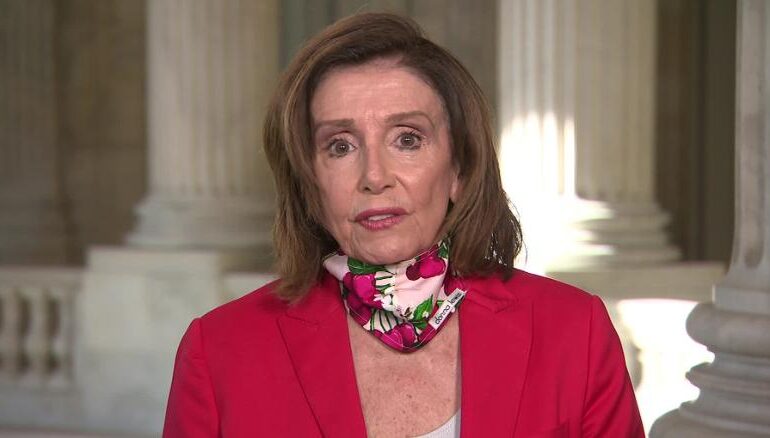 Pelosi said she hopes the bill can be voted on next week. Photo via CNN

WASHINGTON, D.C. —  On Thursday, Speaker of the House Nancy Pelosi laid out broad outlines of the next massive coronavirus-response bill Democrats are expected to seek, with votes possible as soon as next week.

The bill’s major components will include additional aid to state and local governments, more money for coronavirus testing and financial support for the U.S. Postal Service, which has been struggling mightily in recent months.

Prior to Pelosi’s speech, House Minority Leader Kevin McCarthy (R-CA) said such a bill was premature, however.

Pelosi added that she has to get an agreement among her caucus on the bill’s many provisions prior to next week, when a Democratic-led House is expected to be in session and a vote could be cast.

The bill was described by Senate Minority Leader Charles Schumer (D-NY) as “Rooseveltian” in its scope and size.

“We need big, bold action,” he said in an interview with MSNBC.

“We need Franklin Rooseveltian-type action and we hope to take that in the House and Senate in a very big and bold way,” he added.

The term was used in reference to former President Franklin Roosevelt, who oversaw the largest expansion of the federal government and is credited by many historians with helping to end the Great Depression.

Late last month, a $484 billion coronavirus-response bill, the fourth of the year, was enacted, bringing the total aid from Washington to around $3 trillion in 2020 so far. The bills were passed with strong bipartisan support, something Pelosi’s current measure is lacking.

Thus far President Trump and congressional Republicans are divided over the focus of the next bill. Trump has talked about the need for tax cuts, while Senate Republicans have touted business liability protections as companies reopen at a time when the virus is still active and spreading in many parts of the country.

Senate Majority Leader Mitch McConnell (R-KY) expressed opposition to aid for state and local governments, although some senators in his party support it.

Pelosi acknowledged the varying approaches according to a report from Reuters, saying that at some point all sides would have to come together in order to negotiate a deal that could pass Congress and be signed into law by Trump.

The virus has infected about 1.2 million people in the United States and has been attributed to more than 74,000 deaths.

Pelosi added that other Democrats are pushing for the option of “proxy” voting to allow members who are sheltering at home to cast votes on bills. Some Republicans have opposed the measure. McCarthy said the measure could be used as a last resort in the future if Congress were unable to meet.

The White House is also reportedly considering measures it can take to stimulate the U.S. economy without additional legislation, including an extension to the 2020 tax filing deadline and a moratorium on new regulations, NBC reported Thursday.