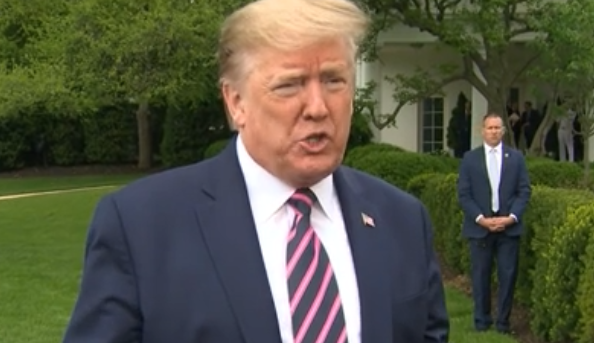 President Trump speaking to CNN prior to his visit to an Arizona mask factory. Photo: Screen capture

WASHINGTON, D.C. — President Trump and Vice President Mike Pence both tested negative for the coronavirus after a member of the U.S. military who works at the White House was found to be infected, a White House spokesman said on Thursday.

The military official was identified as a personal valet to Trump by CNN.

“We were recently notified by the White House Medical Unit that a member of the United States military, who works on the White House campus, has tested positive for coronavirus,” spokesman Hogan Gidley said in a statement. “The president and the vice president have since tested negative for the virus and they remain in great health.”

Trump has now tested negative for the coronavirus at least twice and is reportedly being tested repeatedly, according to White House adviser Kellyanne Conway.

White House staff working in the West Wing have not been wearing masks around the president or each other, Reuters reported. During a trip to Arizona on Thursday, the president, military personnel, Secret Service agents and White House aides did not wear masks. The CDC is currently recommending the public wear masks, but state governments must clarify if and how mask bans will be enforced.

On Wednesday at a meeting with nurses, who were standing closely around him in the Oval Office, Trump noted that everyone had been tested for the coronavirus and quipped that he hoped the tests worked.

Trump has been criticized for giving mixed messages during his handling of the coronavirus pandemic. While he said he would wear a mask on a recent mask factory tour to Honeywell company facilities in Arizona, he did not wear one during the tour and said later that he had not done so after being advised by the Honeywell chief executive that it was not necessary.

A sign at the facility said that employees must wear masks, however.

In Michigan, the public is required to wear homemade, non-medical grade face coverings when entering enclosed public spaces. Employers are also required to provide at least cloth face coverings to their employees. No one will be subject to criminal penalty in Michigan for going without a mask, however.

‘Murder Hornets’ won’t be seen in Michigan for years