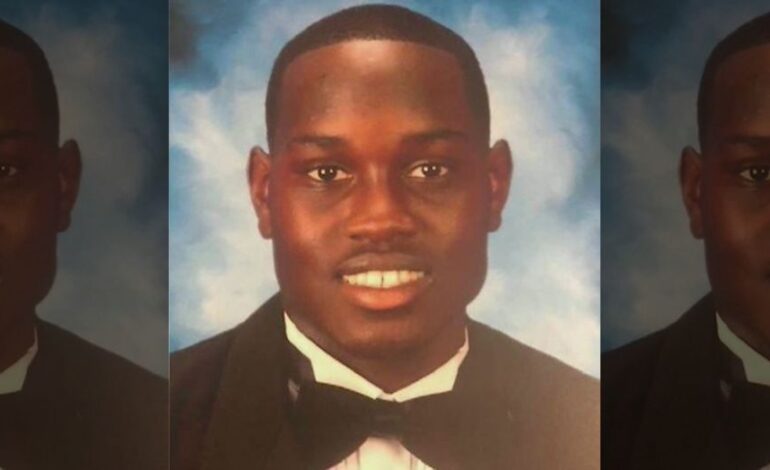 Ahmaud Arbery would have turned 26 on Friday

BRUNSWICK, GA — Father and son, Gregory McMichael, 64, and Travis McMichael, 34, have finally been arrested and charged with murder and aggravated assault in the death of 25-year-old Ahmaud Arbery, authorities in Georgia said on Thursday. Both were denied bond during their first court appearance on Friday.

Arbery would have turned 26 on Friday. A former high-school football player, Arbery was shot and killed while on routine jog on February 23 in south Georgia. The McMichaels claimed they identified Arbery as a suspect in a string of robberies in their residential neighborhood when they saw the young man out for a Sunday afternoon run.

Video of the incident circulated widely just two days before the arrest and caused nationwide outrage. Footage shows the father and son and accomplices seek out, chase and then confront the young jogger, who then tries to defend himself before being shot multiple times, presumably by the son, Travis, though Gregory is also seen pulling out a handgun. WARNING: THIS FOOTAGE CONTAINS GRAPHIC AND DISTURBING IMAGES FROM THE INCIDENT.

A local defense attorney has claimed he released the video to a radio station. It remains unclear who shot it, though it appears they followed the father and son in their pursuit of Arbery. A police report has also said a third man may also have been involved in the incident.

According to an incident report filed by Glynn County police, Gregory McMichael told police that he and his son thought the runner matched the description of someone caught on a security camera committing a recent break-in in the neighborhood. They armed themselves with guns before getting in a truck to pursue him.

The elder McMichael also reportedly called 911 to report “a Black man running down the street” and said he suspected the man was involved in recent burglaries. He said his son got out of the truck holding a shotgun and Arbery “began to violently attack.” McMichael said Arbery was shot as the two men fought over the shotgun, according to the police report. Arbery was not armed. So far, two district attorneys had recused themselves from the case and one claimed he thought the McMichaels had used their citizen’s arrest rights. A third attorney, Tom Durden of the Atlantic Judicial Circuit, said this week he would present the evidence to a grand jury, once the coronavirus pandemic restrictions against them were lifted.

Arbery family attorney S. Lee Merritt has said that the McMichaels saw a Black man jogging through their neighborhood, wrongly suspected him and tracked him down and killed him.

“We don’t believe that this was even arguably self-defense or a citizen’s arrest, but even under their sort of peculiar theory, they can’t set a trap,” Merritt told CNN. “They can’t stop someone in the middle of the road, hop out with (guns), create a dangerous situation and avail themselves of stand your ground or self-defense. That’s just not how the law’s designed to work.”

Gregory McMichael had a long career in law enforcement in southern Georgia and had recently retired. He worked at the Glynn County Police Department from 1982 to 1989 and spent many years in the Brunswick District Attorney’s Office.

The Georgia Bureau of Investigations (GBI) said that on May 5, Durden formally requested it investigate the death of Ahmaud Arbery, which the bureau began the next day. The GBI also said that on the morning of May 5, the Glynn County Police Department requested the GBI investigate the public release of video related to Arbery’s death. Authorities arrested the McMichaels on Thursday.

“Please understand that although there was an investigation conducted by the Glynn County Police Department at the time of the incident over two months ago, the GBI was not a part of that investigation,” GBI said in a statement on Thursday. “We are conducting an independent investigation and are two days into it.

“Yesterday, we received the original investigative file and thoroughly reviewed it, developing a list of actions we wanted to accomplish today based on that review. We have numerous resources poured into this case to include a diverse team of seasoned investigators and supervisors from around the state.”