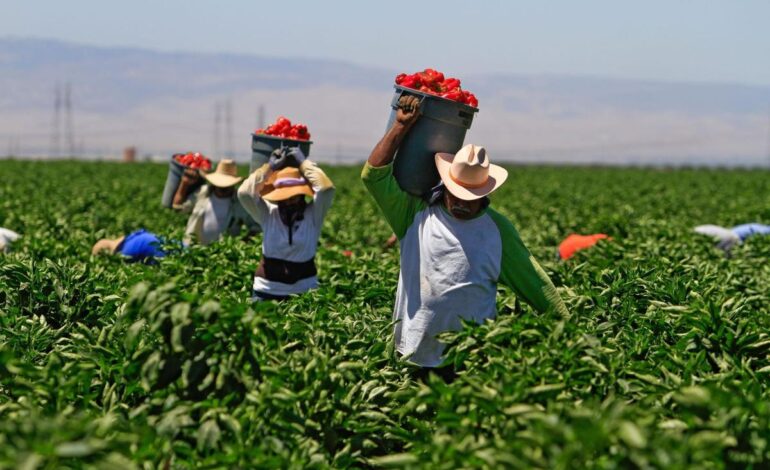 Undocumented workers such as the ones pictured above make California one of the richest agriculture-producing state in the country. Photo: Ricardo DeAratanha

DETROIT— The reality of the global health crisis has brought with it a grave and unprecedented economic crisis in a few short months. In the U.S., state and federal bureaucracies, unemployment agencies and research institutes scramble to understand the breadth and magnitude of the effects of economic closures on both workers and companies.

In Michigan alone, jobless claims surpassed a dizzying 1 million, as the state’s unemployment agency finally took long overdue steps to expedite and streamline its claims process. With the whirlwind of almost weekly reform in the unemployment entitlement system, a whole class of American worker continues to be overlooked: The undocumented worker.

It is no secret that workers without a documented residency or work status, sometimes referred to with the nativist and outright racist term “illegal”, are deemed illegitimate yet still toil away in fields and factories. As the author David Bacon observed, the term itself describes inequality as a global social reality. Yet, those denied the most basic rights and recognition as human beings remain “an important part of the economic engine of this country.”

“A globalized political and economic system creates illegality by displacing people and then denying them rights and equality as they do what they have to do to survive—move to find work,” Bacon writes in his book Illegal People: How Globalization Creates Migration and Criminalizes Immigrants.

“Virtually none”: no relief for undocumented workers in Michigan

Sadly, the reality of COVID-19 may further obfuscate the plight of America’s “hidden” worker. Still, as workers, they continue to be as essential to the economy; in other words, to make profits for their employers. What recourse do these workers have now if they get sick on or off the job or get laid off?

“Virtually none,” said Susan Reed, managing attorney at the Michigan Immigrant Rights Center (MIRC). “Undocumented families, including mixed immigration status families, where you have a citizen or permanent resident individual spouse and an undocumented spouse, are excluded from receiving stimulus funds.”

Workers’ comp is in fact held by the employer, not the employee, and is a system that benefits and protects both the private insurance company that handles claims and the employers making them. In the case of undocumented workers, this benefit is amplified as the insurance company can ask for a worker’s social security number, which such workers do not have, and then deny claims.

“It’s a very disingenuous situation where the employer has accepted an I9 document, paid cash or done something to suffer the person to work, but the more stringent verification kicks in when the insurer goes to pay,” Reed said.

Proving that one contracted the coronavirus while working is already difficult for most and no recourse exists, as of yet, for those undocumented workers seeking compensation for lost wages or COVID-19 related relief such as paid sick leave. Like the contradiction of being deemed an essential worker while working an underpaid and unsafe job, the reality of undocumented work under a health crisis reveals the corroded underbelly of the global economy.

An analysis of U.S. Census data from the pooled 2012-16 American Community Survey (ACS) and the 2008 Survey of Income and Program Participation (SIPP) shows an estimated 129,000 “unauthorized” immigrants in Michigan. Out of those, 120,000 were old enough to work and 75,000 may have been employed. Top industries for these workers were manufacturing and food services and lawn services, industries that Michigan is now gradually opening in light of “flattened” COVID-19 numbers. On April 15, California became the first in the nation to pledge $75 million Disaster Relief Fund to support undocumented Californians impacted by COVID-19 who were otherwise ineligible for unemployment insurance benefits and disaster relief, including the CARES Act, due to their immigration status.

Approximately 150,000 undocumented adult Californians are to receive a one-time cash benefit of $500 per adult with a cap of $1,000 per household to deal with the specific needs arising from the COVID-19 pandemic, beginning this month. Philanthropic partners of the state promised another $50 million.

A week later, the political repercussions of such a bold move became apparent. A petition was filed with the California Supreme Court in San Francisco to block the disaster funds allocated to undocumented workers. The lawsuit, filed by The Center for American Liberty and the Dhillon Law Group, claimed the disaster assistance program is in violation of California and federal law because undocumented workers are ineligible for unemployment benefits. The lawsuit was eventually thrown out in court.

Yet, even such remedies seem shrouded, sooner or later, in attempts to put workers back to work, undocumented or not, even with no vaccine or cure for COVID-19 on the horizon. Temporary assistance now and then a return to work later, means undocumented workers will be asked return to their precarious, unrecognized and inequal place in society soon enough. No acknowledgment of this reality is yet to surface in California’s liberal state apparatus.

Last month the California Insurance Commissioner Ricardo Lara told reporters over a Zoom call that most workers “wanna be out there” working during this dangerous pandemic (quite an assumption on his part). California already has workers’ comp for undocumented workers during and Lara has promised no rate hikes on auto insurance for lost licenses and other small measures during the pandemic. Lara, who makes about $161,342 a year, once accepted thousands in campaign donations from insurance industry representatives, even after promising he wouldn’t. He also came under fire last year for sticking taxpayers with the cost of a second apartment in Sacramento.

Even while workers’ lives become increasingly difficult and dangerous under the pandemic, the commissioner wants to make the insurance industry gets paid and is eventually made whole.