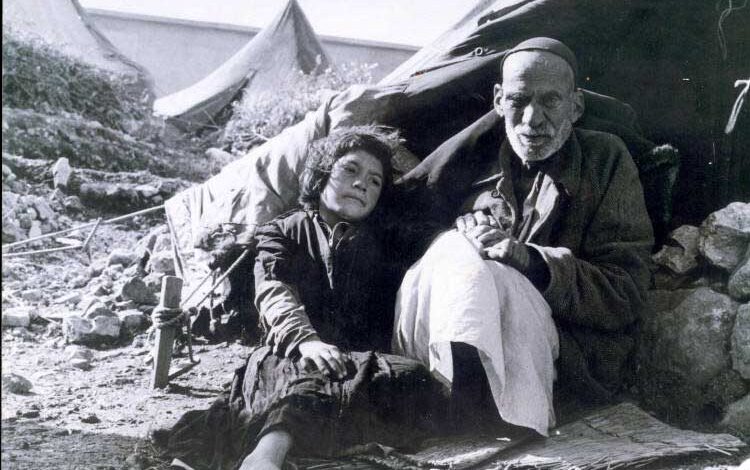 Among the thousands of ethnically-cleansed Palestinians in Beit Daras, two families, Ageel and Baroud, salvaged a few belongings and went searching for a safe place, with the hope that they would return home in a few days.

Dr. Ghada Ageel and Dr. Ramzy Baroud have more in common than their scholarly research on Palestinian history and politics. They are both refugees and the direct descendants of Palestinian refugees who were expelled from their historic village of Beit Daras at gunpoint during the catastrophic events that led to the Palestinian Nakba of May 15, 1948.

Starting on March 27, 1948, a small Palestinian village, called Beit Daras, came under Zionist militias’ attacks. With little means — a few old rifles and kitchen knives — the Badrasawis fought back, repelling the first raid and the second.

The final attack on the peaceful village followed a scorched-earth military strategy, leaving in its wake scores of dead and wounded, and the entirety of the village on the run.

Among the thousands of ethnically-cleansed Palestinians in Beit Daras, two families, Ageel and Baroud, salvaged a few belongings and went searching for a safe place, with the hope that they would return home in a few days.

Hundreds of their descendants are yet to return to Beit Daras, 72 years later.

“I always say that my body is here in shatat (diaspora), my heart is in Gaza, particularly in Khan Younis refugee camp, where I was born and raised, but my soul is in Beit Daras, my village that is no longer on the map,” Ageel said.

“I have never been to Beit Daras, but I carry it in my heart. I feel immense love and connection, and a sense of belonging. This is thanks to my grandmother Khadija who instilled in us the memory of the land and the desire for freedom. She instilled that memory and that love.”

Ageel added, “Today when we are commemorating the 72nd anniversary of the Nakba, of course it is a very sad day, because that day represents the destruction of Palestine, the destruction of Beit Daras and the eviction of over 800,000 Palestinians.

“Among them, there was my family, my parents and my grandparents. So, I consider myself a third generation of Palestinian refugees and then my children have inherited this.”

For his part, Baroud contended that that generation of Palestinian refugees has never embraced a sense of victimhood.

“Our grandparents were not victims, they weren’t prepared to be victims,” Baroud said, emphasizing that Palestinian Resistance was an immediate response to the Nakba.

“In our village, pretty much everybody knew each other. Imagine what it must have been when the villagers found themselves mixed among hundreds of thousands of people, new faces, new tribes, new families, new clans. It’s almost like death and rebirth in your own lifetime.

“My original family didn’t own much land and this is a key for me. Because my Right of Return is not attached to an actual material wealth or entity, it is because it is my right and it has been so embedded in my identity as a Palestinian, and my understanding of myself and my being can only be complete when I am back there, whether I have a small plot of land or a massive one.”

Ageel insisted that “the Right of Return is possible.”

Baroud and Ageel discussed the importance of reclaiming the Palestinian narrative by Palestinians.

“The story that we are communicating right now (that of ordinary Palestinians) is not the dominant narrative,” Baroud said. “It is important to go to the Israeli archives or to the British archives and dig out some testimonies of soldiers about killing and raping; yes, it is important, but what about our version of that story? Why is it that Palestinian history must be always centralized around an Israeli point of view and an Israeli narrative? How do your grandmother Khadija and my grandmother Zeinab fit into this trajectory of historical narratives?

“It is so essential that we, Palestinians, unconditionally reclaim our history and retell it from the beginning, not only for the others, but for ourselves and for our children as well,” he added.

– Dr. Ghada Ageel is a visiting professor at the University of Alberta Political Science Department (Edmonton, Canada). Her latest book is Apartheid in Palestine: Hard Laws and Harder experiences.

– Dr. Ramzy Baroud is a journalist and the editor of The Palestine Chronicle. His latest is “These Chains Will Be Broken: Palestinian Stories of Struggle and Defiance in Israeli Prisons.” Baroud is a non-resident senior research fellow at the Center for Islam and Global Affairs (CIGA), Istanbul Zaim University.

– Romana Rubeo is an Italian writer and the managing editor of The Palestine Chronicle. Her articles appeared in many online newspapers and academic journals. She holds a master’s degree in foreign languages and literature, and specializes in audio-visual and journalism translation.