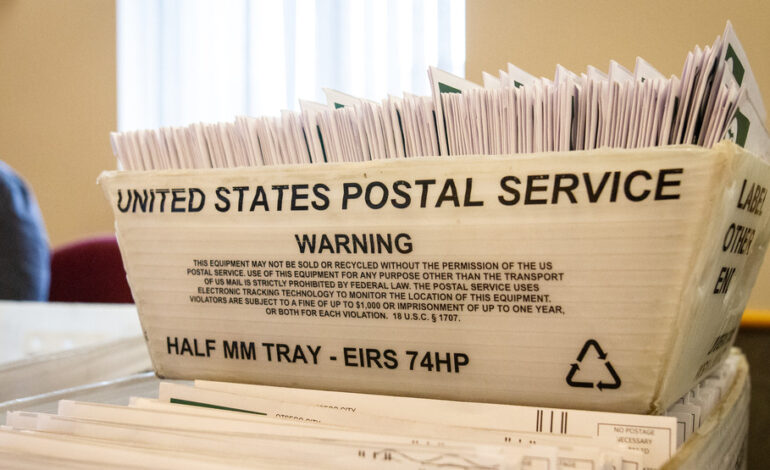 A postal tray filled with absentee ballots sits at the Otsego City Hall on Tuesday, May 5. Michigan residents were encouraged to vote by absentee ballot for the May 5 election due to the COVID-19 pandemic. (WWMT Kalamazoo/Sarah White)

LANSING — Michigan’s 7.7 million registered voters will likely all be mailed absentee ballot applications so they can take part in elections in August and November without needing to vote in person if they so choose, Secretary of State Jocelyn Benson said Tuesday.

The move could lead to a potential court battle according to a report from the Detroit Free Press, but Benson said it is an important step in safeguarding the health of Michigan residents.

“By mailing applications we have ensured that no Michigander has to choose between their health and their right to vote,” Benson said.

She added that in 50 local elections held across the state on May 5, turnout was up significantly from other years and that the vast majority of voters cast absentee ballots by mail or through a drop box.

“We know from the elections that took place this month that during the pandemic Michiganders want to safely vote,” she said.

But some Republicans, including President Trump, have argued against widespread voting by mail. In an April 8 post, Trump posted on Twitter, “Republicans should fight very hard when it comes to state wide mail-in voting. Democrats are clamoring for it. Tremendous potential for voter fraud, and for whatever reason, (it) doesn’t work out well for Republicans.”

Many Democrats have argued that Republicans oppose it because it makes it harder for Democratic supporters to vote, however. Trump has personally voted absentee balloting in New York, where he used to live, and Florida, where he officially lives now.

Michigan changed its rules two years ago to allow anyone to vote by absentee ballot for any reason, a change which helped increase absentee voting in the March 10 presidential primary from 18 percent four years ago to 38 percent this year. Michigan will hold its partisan primary election on August 4 for offices other than president. The general election, including the presidential decision, will be held on November 3.