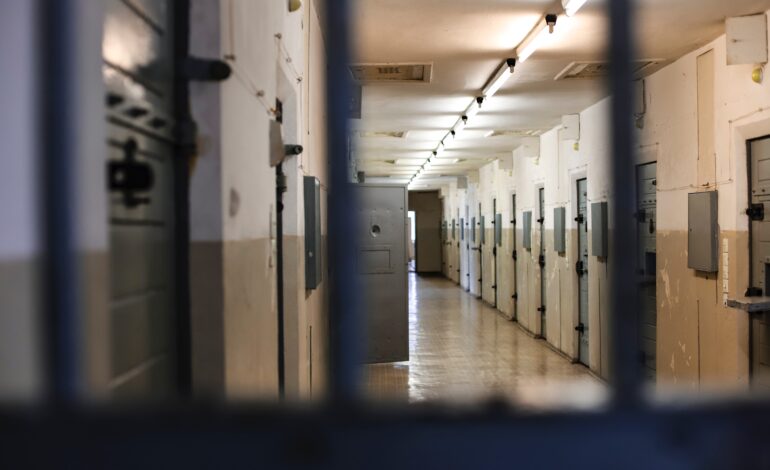 A letter by a Michigan prisoner describes a lack of adequate response by authorities to stop the spread of COVID-19 in Michigan prisons. Photo credit: Matthew Ansley

DEARBORN — The Arab American News has received a letter from an inmate in a Michigan Department of Corrections (MDOC) facility, describing the conditions in his prison and prisons in the state’s system at large. The COVID-19 pandemic poses a further challenge for prisoners and has added a layer of risk to their day-to-day existence due to the confined nature of their housing facilities. The letter’s writer is an Arab American from Dearborn, whose name has been omitted out of respect for his privacy.

To date, there have been 55 deaths and 2,173 cases of COVID-19 among prisoners in Michigan. The following is an account, from the prisoner’s perspective, about how the spread of the disease among prisoners has exposed the lack of preparedness and mismanagement of response by authorities in Michigan’s prison system. As such, his letter appears here in full:

The prison system in Michigan is in dire straits, and this is sadly not only due to the COVID-19 pandemic; it has actually been this way for a long time. COVID-19 was the catalyst that exposed the flaws and mismanagement the MDOC has been experiencing for years, even decades.

Although capital punishment was abolished in the state of Michigan decades ago, the MDOC has now effectively and singlehandedly reinstated the death penalty, usurping the voice of the people of the great state of Michigan. To date, there have been close to 60 inmate deaths related to COVID-19, some of whom were due to parole within a few weeks or months. These deaths could have been avoided if MDOC policies were based on sound scientific methods.

The prison staff (including the warden, deputy wardens, guards, nursing staff, etc.) are effectively the ones who introduced the virus into the prisons, especially since prisoner visits have been suspended since February.

Prior to any positive cases being identified, the administration at JCF (G. Robert Cotton Correctional Facility in Jackson) transferred several prisoners who had tested positive in other prisons to a unit they had opened for that purpose. They were also moving prisoners who were suspected of having the virus to a unit that also housed healthy prisoners. Then, they started haphazardly moving prisoners between different units and different levels in an attempt to create a quarantine unit, situated in the middle of several other units with no known cases. When they finally did the mass testing, the administration sought to segregate prisoners with positive results into separate units. In spite of this, the spread of the virus still has no plans of stopping, not only because the prisoners cannot possibly practice social distancing, but also due to external, unavoidable factors. For example, the warden and his deputies constantly amble about the facility, making their rounds, and in the process potentially further spreading the virus because they visit those units designated for positive cases as well as those designated for negative ones. The guards also work in different units on different days, alternating between positive and negative units. Nurses constantly make their rounds to the positive units, but return to the healthcare offices where they interact with other nurses and sometimes even prisoners from negative units. Even within the past few days, this administration is still playing “musical chairs” with prisoners by moving them from one unit to another.

During the first few days of the virus being detected, for example, when a prisoner was displaying symptoms, he would be placed in segregation, and the seven other prisoners within that cube would be placed in the “quarantine” unit. Only after his results came in would the others receive or not receive a test, depending on the result. When the quarantine unit was virtually full, they would only place the one with symptoms in segregation and leave the others in place. Mind you, these units are comprised of 20 “cubes”, each with eight bunk beds for a total of 160 prisoners. These cubes are not closed off, rather only separated by walls tall enough to cover the top bunk and open in the front; and although this facility and the entire MDOC keep emphasizing social distancing, the fact is that it is IMPOSSIBLE for prisoners to do that in such settings. Even using the phones or bathrooms makes it impossible to social distance because there is roughly two feet between phones, toilets, sinks, showers, etc.

The worst part of all this is that when a prisoner is placed in segregation or in a positive unit, he is deprived of all his property (clothes, books, food items, etc.), limited access to a phone and basically treated as if he were there for punishment rather than for medical attention. What ensued was that even if a prisoner was experiencing any sort of symptoms (COVID-19 related or otherwise), he was therefore understandably reluctant to report any illness.

There are currently around 38,000 inmates in the over 40 prisons in Michigan. Aside from the fact that this number represents the highest per capita of inmates, not only in the U.S., but also worldwide, there is no real plan to reduce this inmate population by the MDOC, the state legislature or the governor. The ones that get parole are quickly replaced by those waiting in the county jails; and unless something is done now, the cycle will never cease and this pandemic will keep hitting harder and harder.

If and when the governor or an MDOC spokesperson is asked about prisons, they fall back on several talking points that on their face might be true statements, yet they lack sincerity and candor. These include: We are working with the director of MDOC, Heidi Washington, on a smart plan to release prisoners; the parole board has been conducting more interviews six months to a year prior to a prisoner’s earliest release date (ERD); we are doing more than any other state as far as testing for COVID-19; we have paroled over 200 prisoners last week, will parole over 200 prisoners next week, etc.

Again, each of these statements, on its face, is true. However, the “truth” is that this number of prisoners being paroled is no different than before the pandemic, therefore no more is being done due to COVID-19. The parole board already interviews prisoners six months prior to their ERD, but does NOT have the authority to release anyone prior to that date. The same goes for the director of the MDOC, who also cannot order the release of anyone prior to their ERD. The reason the parole board or the director cannot release anyone is due to the “Truth-In-Sentencing” (TIS) law, which took effect in January 1999. It would be unlawful for them to act contrary to that law. The ONLY remedy is to somehow invalidate TIS. Normally, the state legislature has the sole power to remove this law from the books. However, because the governor is now operating under emergency powers, she can, with the stroke of a pen, issue an executive order suspending TIS until this pandemic is under control.

This will allow the MDOC director and the parole board to release prisoners based on time served, institutional record, accomplishments, recommendations, outside support system, etc. We are not saying that every prisoner in Michigan will have an opportunity at parole, but it does give those who meet these criteria a chance to go home to their families and not in a body bag. This will reduce overcrowding and at least make a dent in the prison population, who would then be able to actually practice social distancing. Most prisons are understaffed and have been for years. This will also relieve the overworked prison guards, who have been working overtime and receiving hazard pay to boot. Most importantly, this will help alleviate the cost incurred by the state to house this many prisoners and divert the finances to more effective and worthy departments, such as healthcare, education and infrastructure.

In the 21st century, there should be no reason why the MDOC budget is higher than any other department in the state. $2 billion is not only asinine, it should be downright unlawful. The arcane and draconian laws this state still has on its books all need to be reviewed to reflect the age we live in, but we can at least start with abolishing TIS. Furthermore, a simple review of the JRC administration and others around the state’s records by the right people would expose the inadequacies and shortcomings and allow the public to see the incompetence of the MDOC in handling this pandemic within their prison walls and think twice as to how their precious tax dollars are being spent when deciding who to vote for in November. Governor Whitmer, during all of her interviews with local and national media, as well as in her press conferences, emphasizes the statement “do the right thing.” We say to the honorable governor, “Isn’t it time you led by example and practiced what you preach?”