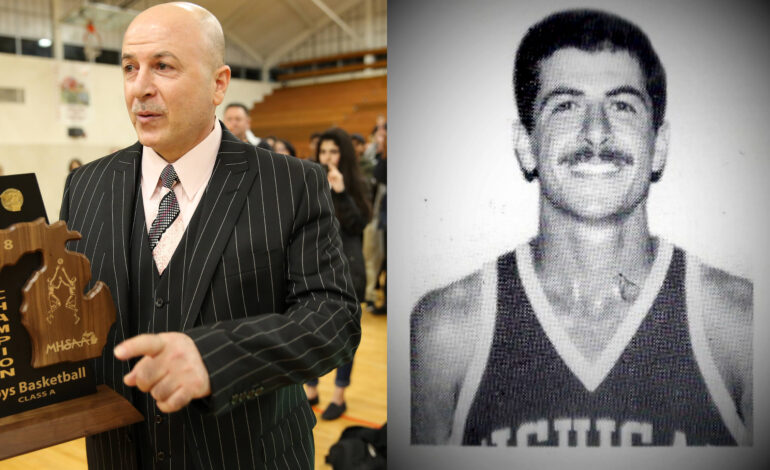 Though the induction ceremony may be postponed, Dearborn can proudly look back at the stellar athletic and coaching career of one its own. All photos courtesy of the Baydoun family.

DEARBORN — The University of Michigan-Dearborn was set to induct a Dearborn sporting legend, Ibrahim “Juice” Baydoun, into its Athletic Hall of Fame for the Class of 2020 on June 7. Only the second such class to be given that honor, the ceremony may be postponed due to the coronavirus pandemic, but that doesn’t take away from the celebration of Baydoun’s unique athletic achievements and decades-long service to youth in Dearborn.

Baydoun has been a high school counselor at Dearborn’s Edsel Ford High School for 29 years and the boys’ varsity basketball coach for the last 24. Coaching and counseling have been a passion, but it was right after an illustrious high school and college basketball career that Baydoun pivoted over to mentoring and training Dearborn’s youth.

Baydoun told The Arab American News this week that since he can remember, being outside and playing sports was something he cared deeply about. Pushing kids to do the same these days, especially with many preferring staying in and on their screens, has been a mission. “I strongly feel that back in the day kids were more active, especially outside,” Baydoun said. “Growing up I spent all of my time outside, spending five to six hours playing basketball; and I knew if I practiced and work hard at it I would become good at it.”

And good at it he became. After moving to the U.S. with his family as a 6-year-old in 1970, the Bint-Jebail native took his athletic regimen seriously. He began his hardwood career early, playing three seasons in the Dearborn Recreation Department’s youth leagues beginning in 1975. Onwards to Lowrey Junior High, where Baydoun led his team to an undefeated 10-0 season, clinching the city championship.

“We had more freedom back in the day to spend time and play with friends,” Baydoun recalled. “I used to ride my bike around town just to get to the basketball game. I spent so much time playing that I eventually got good at it. I invested a lot of time in becoming a good basketball player.”

1980 rolled around and Baydoun brought his talents to Fordson High School, yielding an impressive high school career. Playing both varsity football and basketball for three years, Baydoun broke the school record with 38 receptions in a single season during his senior year.

As a point guard, he also led the basketball team to a district and league championship. In that three-year time, Baydoun broke four school records, three of which still remain after 37 years, and rank as some of the top records in Michigan High School Athletic Association (MHSAA) history.

After accepting a basketball scholarship at U of M-Dearborn, he became the leading scorer in school history in just three years, with 1,030 points, breaking the old school record of 1,015 points held by David Goode. A 21.7 point average coupled with 5.6 assists and 3.5 steals during his senior year led him to be named first team All-American. Baydoun broke nearly 20 records in his time at college, including single season, single game and career records, an impressive career for the 5’9, 160 lbs college player. He also kept up his academic performance, receiving the U of M-Dearborn Scholar Athlete Award during the 1985-87 seasons.

In his time as a counselor and coach Baydoun has won 295 games and numerous championships, helping numerous players at the collegiate level, with many former players going on to become successful coaches themselves. He has also provided $1,000 scholarships to all senior member of his basketball team with cumulative 3.0 GPAs or higher.

“I love helping people and try to be a role model for the youth,” Baydoun said. “I thought I would have more of an impact on kids’ lives if I went into education and counseling.

“I’ve been doing the scholarship quite a while now; it’s an incentive for my kids to help them reach their goals and reach higher. I don’t want kids to be satisfied and try and challenge them to set their goals really high.” Baydoun was previously inducted into the Dearborn Recreation Hall of Fame in 2008 and the Hype Athletics Hall of Fame in 2016. He currently resides in Dearborn Heights with his wife, Houda, and his five children, Jihad, Mahdi, Hadi, Jalal and Hilal, and his parents, Haj Ahmad and Hajji Abdeh Baydoun, who supported him through his career.

“They are two loving, caring and selfless elderly couple who took good care of the entire family while growing up,” Baydoun said of his parents. “I promised them at a young age that I will stay and take care of them as they took care of me as a child.”