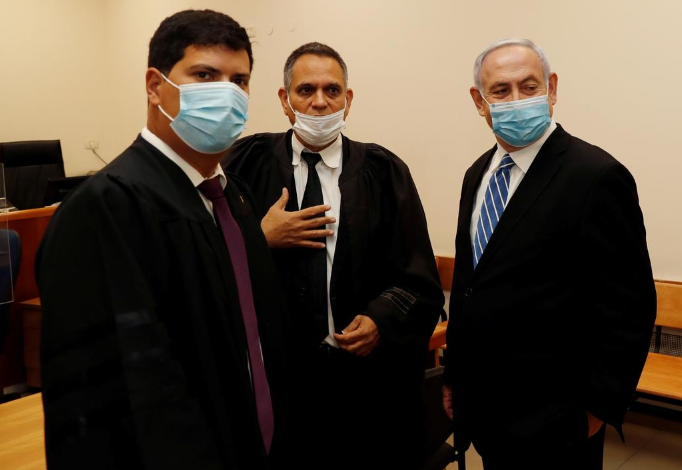 Israeli Prime Minister Benjamin Netanyahu, wearing a face mask, stands next to his lawyers inside the courtroom as his corruption trial opens at the Jerusalem District Court, May 24. REUTERS/Ronen Zvulun

JERUSALEM — Benjamin Netanyahu appeared in court on charges of bribery, fraud and breach of trust Sunday, becoming the first Israeli prime minister ever to go on trial.

The trial came just a week after Netanyahu was sworn in for a record fifth term, after he secured an unexpected power-sharing deal with his main opponent, Benny Gantz, after three inconclusive elections in a year. He said the cases against him are a left-wing plot to unseat him and proclaimed innocence.

Netanyahu, 70, was indicted in cases involving gifts from millionaire friends and for allegedly seeking regulatory favors for media tycoons in return for favorable coverage.

He appeared at Jerusalem District Court backed by cabinet ministers from his right-wing Likud Party.

Netanyahu and the judges wore face masks due to coronavirus concerns.

The hearing lasted an hour, during which Netanyahu was excused from appearing in person at the next hearing, set for July 19. Analysts say the trial could last months or even years, according to a report from Reuters.

Before the hearing, the Israeli leader removed his mask to address television cameras in the courthouse hallway.

“These investigations were tainted and stitched-up from the first moment,” Netanyahu said. “I am appearing here today, as your prime minister, standing tall and with head high.”

Meanwhile, anti-Netanyahu demonstrators also gathered outside his residence in central Jerusalem, holding up a banner reading “crime minister”, a slogan that also appeared on some face masks.

Netanyahu, who has been in power for 11 straight years plus three additional years in the 1990s, plans to proceed towards a pledged annexation of parts of the occupied West Bank, on land Palestinians hope will be part of their state.