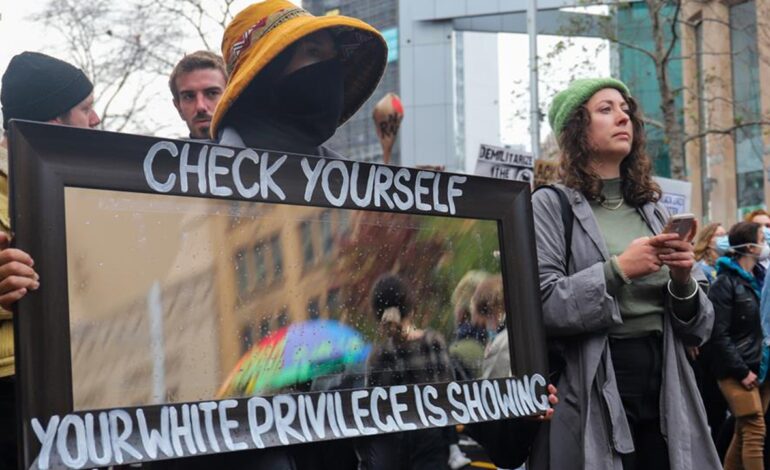 People take part in a protest over the death of George Floyd in central Auckland, New Zealand, on June 1.Floyd, an unarmed Black man, was suffocated to death by a White police officer in Minnesota on May 25.

In light of what has been happening recently I have a few words to say. Let’s put the pandemic aside for a second, but keep in mind we have all been locked up and quarantined in our homes for at least three months now and so all our voices are amplified and all our emotions are magnified.

The killing of George Floyd was senseless and inhumane. You need to be heartless or sick-minded to not have been affected by watching that video.  Many outsiders have argued that Arabs and Muslims specifically have been dying daily and killed in numbers in their homelands by ruthless wars and unjustified settlements by the corrupt Zionist regimes.  Yes, it’s all very true. However, when it comes to murder, we should not compare the significance of one over another.  Murder is murder.  George Floyd was an innocent Black man, one of many who have been killed unjustly by the police over the years.  This is not new, but when senseless killings like this against a race add up you can expect to reach a tipping point.  George Floyd was that tipping point.

You cannot excuse the actions of those officers, no matter how you look at the situation.  They would not have suffocated and tortured a White man to death, even if he deserved it.  For the people comparing the number of police killings of Whites versus Blacks versus other people of color, just STOP.  You are the problem.  People like you that are finding ways to justify that officers kill more White people than they do Blacks is what is wrong with society.  It is not the number of killings. It is the act of merciless, unwarranted accusations and brutality that Black people are faced with by a system of slave-mastery and money-hungry White men that run this country.

This is a system that has been built to play a game long ago.  Nothing has changed over the years except for technological advancements and Hollywood content.  We are forced to buy into Hallmark holidays and seasons of sports to fill our bellies and distract us from the very system that controls us.  Look around you.  We are sheep in a very large and attractive country.  Every second you spend watching a football game, the government is making plans to attack another Middle Eastern country.

Should we take it as far back as the Native Americans? Because the next time you hear a White man telling you to “go back home”, you can share the irony of that situation and respond, “Let’s go back together.”

If we want to talk politics, as an Arab American Muslim woman, I have so much to say.  But today my focus is on America and how great this country really wants to appear to be.  Since elementary school every child is taught to memorize three very important things: The national anthem, the pledge of allegiance and how Christopher Columbus discovered America.  Little do we know about the corruption of the founding fathers, their hunger for power and slavery.

Should we take it as far back as the Native Americans? Because the next time you hear a White man telling you to “go back home”, you can share the irony of that situation and respond, “Let’s go back together.”  How are we expected to live and breathe the amendments if every person of color has to question their position in society today? Women’s rights. Black rights. The list goes on and on.  We look up to so many Black faces who have stood up to this regime and tried to make a difference.  It makes me so sad to think that America is feeding its sheep to keep quiet, when countless acts of discrimination and oppression continue to happen as if nothing has changed since the Civil Rights movements.

There is a sad truth around us that we have all been living with and refusing to bring to the table.  It is time to raise your voices.  All people.  This is a chance to learn and stand by all our Black brothers and sisters.  They have been through enough.  For all the rest of you who have been preaching “All lives matter”, I have a few words to say on that topic as well.  Lives are lives, of course they all matter. But the African American community at large has faced oppression collectively throughout the nation and for so many years.  This has been an ongoing issue and needs to be resolved once and for all; be it through protests or riots or social media platforms, let all their voices be heard.  You have a majority of men, women and children who have struggled and strived to make it in a nation that speaks the language of White privilege.  If you claim not to know that language, then you have been speaking it all along.

In my last piece I would like to speak about the Arab American community (members) who stand and fight for the rights of Blacks today.  We know racism, we have faced it and heard it.  We did not come here as slaves, so we cannot claim to know what their ancestors went through.  Instead we came as refugees and immigrants.  I for one do not feel like I truly belong here.  My patriotism has a long way to go.  I cannot love a nation that serves to divide its people through acts of subliminal propaganda and corruption.

It’s even a shame that we need to call ourselves African American, Latin American, Asian American, Arab American instead of AMERICAN.  It’s language like this that we are trained to use and not realize the division it causes.  I may live here and work here and enjoy the fruits of my labor, but I will never call this country Great.  The sad truth is I will always feel like an outsider, as much as I try not to.

Countless Black men and women have died at the hands of this prejudiced and corrupt system.  They must stand and let their voices be heard.  They have waited long enough.  Black culture is beautiful, talented and all-around magic.

I can speak on behalf of most Arabs in this community when I say how comfortable I feel living in the state of Michigan.  We made our own town here, assimilating the cultures of the homes we hold near and dear to our heart, our roots that made us who we are today with the parts of America that we love and appreciate.  We get the best of both cultures this way and there’s no place like it in all of America.  We can enter a café and listen to the beautiful voice of Fairouz, the epitome of all that is beautiful in Lebanon.  We can find our traditional foods and read Arabic signs and finally feel represented in a nation that likes to remind us that we are part of the minority.

Our race is connected to our religion and they don’t understand it, so they fear it.

The fight does not end here.  Countless Black men and women have died at the hands of this prejudiced and corrupt system.  They must stand and let their voices be heard.  They have waited long enough.  Black culture is beautiful, talented and all-around magic.  From MLK to Malcolm X.  From Tupac to Bob Marley.  The list goes on, and today they are making history just as they have always made history.  I hope that from this fight we can bring conversations to the table that should have been had long ago.  Anti-Black, racist acts must end here.  I, myself vow to learn and help facilitate this change and help bring this matter to light for others who seem misguided. America has a long way to go and I hope this can pave the way for justice served within the country and outside as well.  It’s time Americans wake up and help fight the system that has brought us all to our knees in the face of violence and oppression.  It’s time the leaders take a knee and stand with all the minorities they have robbed and raped and harassed.  Black power is powerful; they can run this country and serve it well.  We should put our trust in them for a greater America and one in which we can all feel the impact of our melanated voices. – Zeina Angela Ali Yahfoufi is a resident of Dearborn, Michigan and is currently in the MS Clinical Psychology graduate program at the University of Michigan-Dearborn