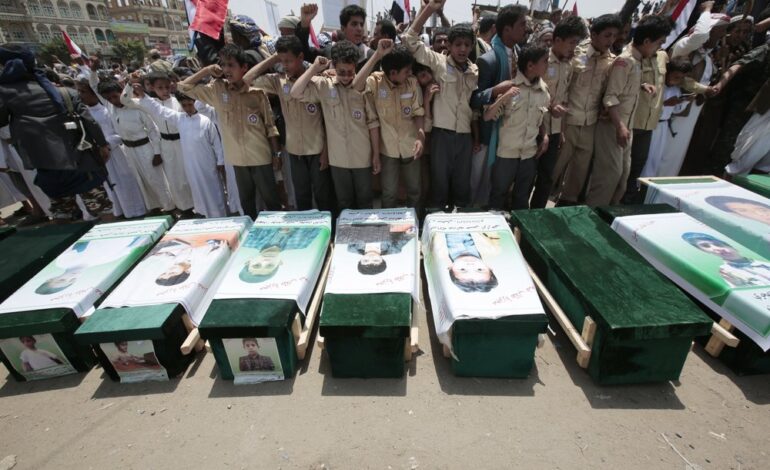 Yemenis attend the funeral of victims of a Saudi-led airstrike that killed 40 children in Saada, Yemen, in Aug. 2018. Photo: Hani Mohammed/AP

NEW YORK — On Monday U.N. Secretary-General Antonio Guterres removed a Saudi Arabia-led military coalition from a U.N. blacklist. The coalition was condemned and was on the list for several years for killing and injuring children in Yemen.

Reuters reports that Guterres wrote in his annual report to the U.N. Security Council on Monday that the coalition would be delisted for the violation of killing and maiming, following a  decrease in the killing and maiming of children from air strikes and the implementation of measures aimed at protecting children.

The Saudi-led military coalition was blacklisted back in 2017, for what the U.N. says were atrocities against children in Yemen during Saudi Arabia’s military campaigns. The U.N. counted that the coalition killed 683 children and attacking 38 schools and hospitals in 2016.

The blacklist is part of the annual U.N. report on children in wars and armed conflict. As such, the Houthi group, the government forces of Yemen and other groups, including Al Qaeda, were included in the list.

The U.S. has given intelligence, logistical support and weapons to the Saudi military offensive in Yemen, which began a little over five years ago. Also called the Yemeni Civil War, Saudi Arabia has headed a military coalition of mainly Arab states in order to intervene in the ongoing conflict between exiled President Abd-Rabu Mansour Hadi’s government and the Houthi separatist movement.

Saudi Arabia’s actions to restore Hadi’s power in Yemen have drawn strong international condemnation. The Yemen Data Project estimates 18,443 civilian casualties as of May. ACLED reported that around 67 percent of all reported civilian fatalities in Yemen over the last four and a half years have been caused by the Saudi-led coalition. Many of its airstrikes have targeted civilian targets such as hospitals and schools.

COVID-19 has hit the war-torn country and its collapsed healthcare system hard. Some 80 percent of its population already relies on aid. Close to 4 million Yemenis have been displaced. For the uprooted, harsh economic realities has made quarantine and self-isolation a nearly impossibility.

The U.S. Senate has failed to override President Trump’s veto of its resolution to end the U.S.’ military support, including $8 billion in arms sales, for Saudi Arabia in Yemen. The resolution was co-sponsored by Vermont Senator Bernie Sanders.