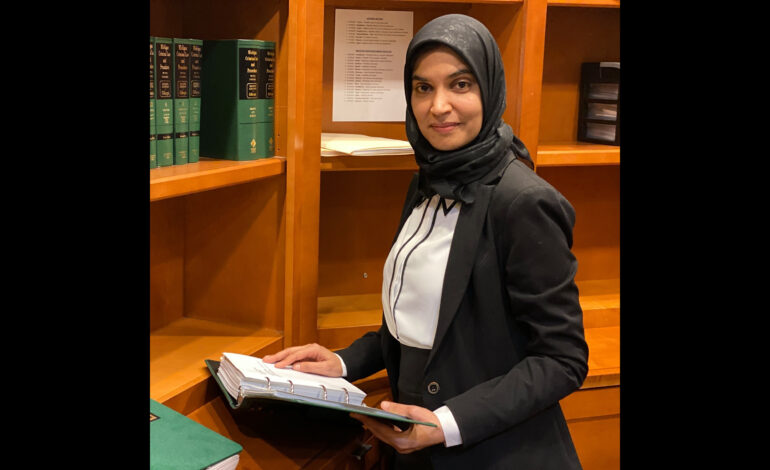 WARREN — In August, Macomb County residents will have the choice to vote for the first Muslim American candidate for county prosecutor in Michigan. The primaries pit Pakistani American Saima Khalil, 39, against four other non-incumbent Democrats.

Beyond this historic candidacy, Khalil looks to bring long-needed progressive change to the criminal justice system in Macomb by cutting down certain antiquated practices. Her platform promises a turn towards treatment, rehabilitation and restorative justice over punitive measures.

Khalil wants issues that affect working families in her county, such as poverty, addiction and mental illness, to be at be seriously considered by the justice system that serves them. She connects much of this approach to her time growing up and practicing law in Macomb County.

“I’ve spent my entire life in Macomb County,” Khalil, a first generation Pakistani American, told The Arab American News. “I grew up in Warren and graduated high school in 1998. Warren at that time was not the most diverse of communities. That experience of being a minority really strengthened me.”

Khalil ran a general practice, working cases in multiple counties, up until four years ago. She then switched over to a civil legal aid office in Macomb County, catering to low income residents.

“The last four years, practicing almost exclusively in Macomb, were really an eye opener,” Khalil said. “I had a lot of contact with criminal law, as a lot of people that come through legal aid, their lives are severely impacted by the criminal justice system.

“These can be individual criminal charges pending against them or their loved ones. I’ve seen the impact on those families. It really breaks them down.”

Khalil’s platform includes bold reforms to counteract long-term economic impacts of the criminal justice system on working-class families. This includes no pre-trial custody of non-violent offenders who are not flight risks nor present a harm. Khalil believes such detentions are economic burden — both on individuals and taxpayers. Khalil also prioritizes rehabilitation services for addiction and treatment for those who come into contact with the criminal justice system due to mental health issues. She also proposes a unit that identifies and corrects wrongful convictions.

Khalil said a prosecutor’s office shouldn’t be looking to find ways to punish vulnerable people, who may already be struggling to put food on the table. She said parents’ efforts to provide for their families by working minimum wage jobs should count for something.

Khalil, like many, has been disheartened by recent incidences of police brutality that have sparked nationwide protests.

“Police officers play a critical role in ensuring community safety,” she said. “Most professions have some sort of regulation.

“A lawyer’s license can be suspended or even revoked. Same with healthcare professionals. The idea that a police officer cannot be criticized, investigated or prosecuted is both wrong and antiquated. Just like any other profession, a bad police officer taints the rest of the good police officers. If the police department is tainted with officers that act with impunity, what is that really communicating to the public?”

Khalil earned degrees from Wayne State University, the University of Michigan-Dearborn and Thomas M. Cooley Law School. She is district chairperson of the State Bar Character and Fitness Committee and director of the Macomb County Bar Association.

The county prosecutor’s seat was previously held by longtime prosecutor Eric Smith, who resigned in March after being charged by Michigan’s Attorney General’s office with embezzlement. An interim prosecutor, Jean Cloud, was appointed until November.