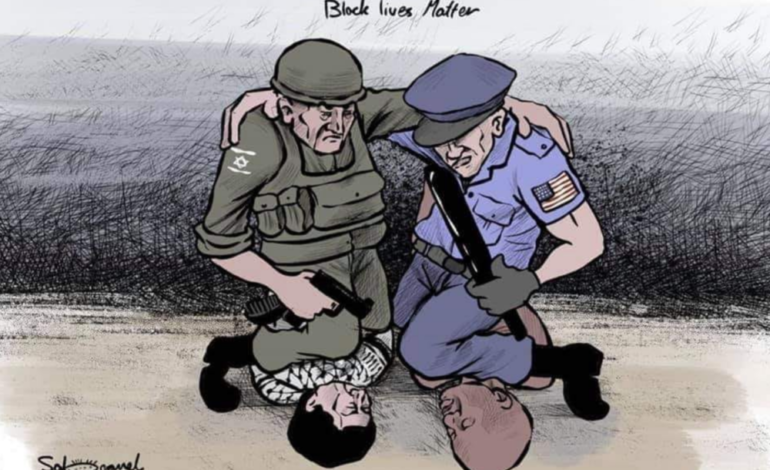 The banning of deadly police practices by many American states and cities following the murder of an African American man, George Floyd, at the hands of Minneapolis police officers is, once more, shedding light on U.S.-Israeli collaboration in the fields of security and crowd control.

From California to New York, and from Washington State to Minneapolis, all forms of neck restraints and chokeholds that are used by police while dealing with suspects are no longer allowed by local, state or federal authorities.

This is only the beginning of what promises to be a serious rethink in police practices, which disproportionately targets African Americans and other minority and marginalized communities across the United States.

The refashioning of the American police, in recent years, to fit some kind of a military model is a subject that requires a better understanding than the one currently offered by mainstream U.S. media. Certainly, U.S. racism and police violence are intrinsically linked and date back many years, but the militarization of the U.S. police and its use of deadly violence against suspected petty criminals, or even non criminals, is a relatively new phenomenon that has been largely imported from Israel.

While an urgent conversation is already under way in U.S. cities regarding the need to reimagine public safety, or even to defund the police altogether, little is being said about the link between the U.S. war on terror and the American elites fascination with the Israeli example in its dealing with besieged Gaza and occupied Palestinians in the West Bank.

The Israeli example (could serve as) a possible basis for arguing … that torture was necessary to prevent imminent, significant, physical harm to persons, where there is no other available means to prevent the harm, the CIA General Counsel report of September 2001 read, as quoted by Slate magazine.

Equally important to the argument made by the CIA above, was the actual date only a few days after the terrorist attacks of September 11. That was the beginning of the Israeli- American love affair, which entirely redefined the nature of the relationship between Washington and Tel Aviv, removing Israel from the category of client regimes, into a whole new one as a model to be mimicked and a true partner to be embraced.

The language used by the CIA, and other facets of U.S. intelligence agencies, quickly seeped into the military as well, and eventually became the uncontested political discourse, epitomized by former President Obama words in June 2010 that the bond between the United States and Israel is unbreakable.

Unbreakable indeed, since Israel, the long-time recipient of American financial support and military and intelligence secrets, became a major exporter of ideas, security technology and war on terror tactics to the U.S.

It is critical that we do not reduce our understanding of this troubling rapport between the U.S. and Israel to military hardware and intelligence sharing. The American infatuation with Israel is essentially an intellectual one, as the U.S. began viewing itself as inferior to Israel in terms of the latter’s supposed ability to navigate between sustaining its own democracy while successfully defeating Palestinian and Arab terrorism.

For example, former President George W. Bush saw extremist Israeli politician and author Natan Sharansky as a mentor. In January 2005, The New York Times reported how the Bush White House invited Sharansky to the Oval Office to discuss his book The Case for Democracy: The Power of Freedom to Overcome Tyranny and Terror.

Thus, a barely visible Israeli politician became the moral authority for Bush’s invasion of sovereign Arab countries. It was during this period that Israeli torture tactics, including the infamous Palestinian Chair, became the crown jewel of the American military’s systematic violence used in America’s immoral wars from Iraq to Afghanistan, to elsewhere.

Writing in the Israeli newspaper Haaretz in 2016, Rachel Stroumsa argued that the Palestinian Chair is but one of many examples of ties and seepages between the security practices of Israel and America, adding that the CIA explicitly justified its use of torture in depositions to the Senate Intelligence Committee by citing High Court of Justice rulings.

The political, military and intelligence marriage between the U.S. and Israel in Iraq quickly spread to include the U.S. global war on terror, where Israeli weapon manufacturers cater to every American need, playing on the country’s growing sense of insecurity, offering products that range from airport security, the building of watchtowers, the erection of walls and fences, to spying and surveillance technology.

Elbit Systems, Israel’s largest military company, made a fortune from building surveillance towers and sensors, in addition to many other products, across the U.S.-Mexico border. The company, like other Israeli companies, won one bid after another, because its products are combat-proven or field-proven, because these technologies have been used against, or tested on, real people in real situations; the people here, of course, being Palestinians, Lebanese and Syrians.

The fact that thousands of American police officers have been trained by Israelis, thus the burgeoning of violent military-like tactics used against ordinary Americans, is only one link in a long chain of deadly exchanges between the two countries.

Almost immediately after the September 11 attacks, the Anti-Defamation League, the American Jewish Committee’s Project Interchange and the Jewish Institute for National Security Affairs have paid for police chiefs, assistant chiefs and captains to train in Israel and the occupied Palestinian Territories, Amnesty International said in a recent report.

But this is only the tip of the iceberg, for the Israeli army manual, which holds little respect for internationally-recognized rules of conduct, infiltrated numerous police departments across the U.S. Even the typical look of the American police officers began changing to resemble that of a combat soldier in full gear.

The growing Israeli role in shaping the American security state allowed Israel to push its political priorities past its traditional stronghold over the U.S. Congress to individual states and, eventually, to city councils across the country.

Even if some of the Israeli tactics, which are currently applied by the U.S. police, are discontinued under the collective chants of Black Lives Matter, Israel if not stopped will continue to define Washington’s security priorities from Washington State to Texas, because the relationship and Obama’s unbreakable bond is much stronger and deeper than anyone could have ever imagined.