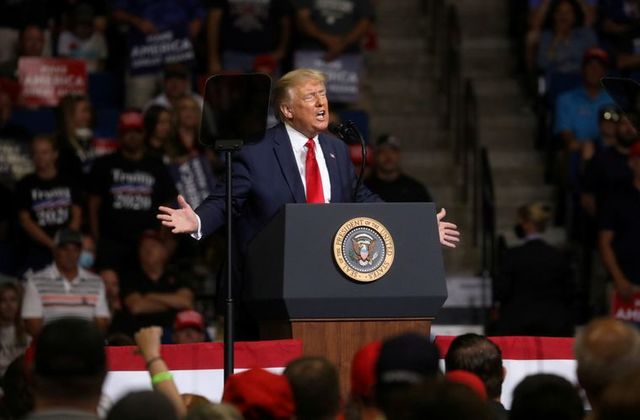 President Trump speaks at his first re-election campaign rally in several months in the midst of the coronavirus disease (COVID-19) outbreak, at the BOK Center in Tulsa, Oklahoma, U.S., June 20. Photo: Leah Millis/Reuters

NEW YORK (Reuters) — American approval of President Trump’s handling of the coronavirus pandemic has dropped to the lowest level on record, the latest Reuters/Ipsos opinion poll shows, as new COVID-19 cases surged and Trump was widely criticized for suggesting he wanted to slow down testing.

The June 22-23 poll also found that a majority of Americans want Trump’s former national security adviser, John Bolton, to testify to Congress under oath, after he accused Trump in a new book of misdeeds, including seeking Chinese President Xi Jinping’s help to win re-election.

The poll shows that 37 percent of Americans approved of the way Trump has responded to the pandemic, the lowest on record since Reuters/Ipsos started asking the question at the beginning of March. Fifty-eight percent said they disapproved.

With a little over four months to go before the Nov. 3 general election, Joe Biden, the presumptive Democratic presidential candidate, leads Trump by 10 percentage points among registered voters, according to the latest poll, down slightly from a 13-point lead in a similar poll last week.

Trump has been slow to publicly acknowledge the severity of the coronavirus outbreak, which has killed more than 120,000 Americans so far, and he has pushed states to reopen before experts said it was safe to do so.

In his first post-pandemic rally, held in Oklahoma on Saturday, the president told thousands of supporters that testing was a “double-edged sword” and that he asked health officials to slow down testing in response to the public’s concern for the growing number of cases.

Administration officials said Tuesday that Trump did not, in fact, ask them to slow down testing, which is one way to track and eventually control the spread of the disease.

Trump has steadily bled support among a broad swath of voters since March. Americans are increasingly critical of his response to the pandemic and a wave of protests in the aftermath of the May 25 police killing of George Floyd, a Black man in Minneapolis.

Members of Trump’s Republican Party also appeared to be more pessimistic than at any other time during his presidency. Just 43 percent said they thought the country was headed in the “right direction”, the lowest level recorded by the Reuters/Ipsos poll since Trump entered office in January 2017.

Trump has faced an unusual outpouring of criticism from members of the military establishment such as James Mattis, his first defense secretary, over his militarized response to the protests. Most recently, Bolton said Trump was unfit to be president and accused him in his new book of routinely obstructing justice.

Fifty-eight percent of Americans — 81 percent of Democrats and 37 percent of Republicans — said they would like to see Bolton testify under oath about his experiences in the Trump administration.

Bolton, who refused to do so last year as part of the House of Representatives’ impeachment proceedings against Trump, appeared to confirm one of the investigation’s central allegations in his book, saying that Trump wanted Ukraine to investigate Biden and his son, Hunter, as a condition to receiving U.S. security aid.

The Reuters/Ipsos poll was conducted online, in English, throughout the United States. It gathered responses from 1,115 adults, including 503 Democrats and 408 Republicans. It has a credibility interval, a measure of precision, of 3 percentage points.