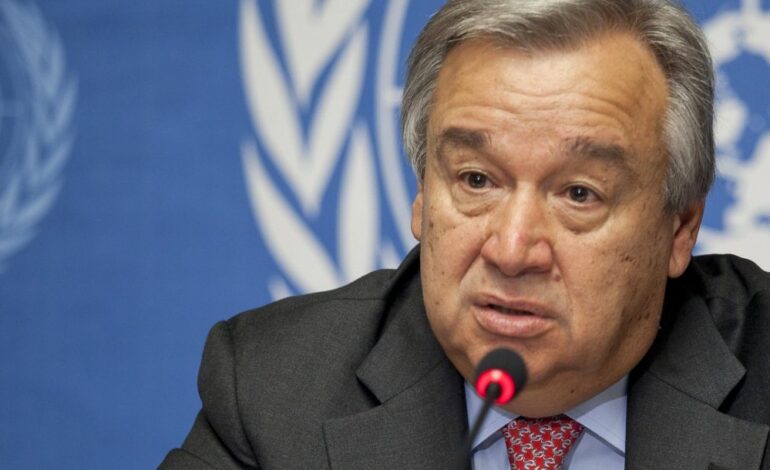 “If implemented, annexation would constitute a most serious violation of international law, grievously harm the prospect of a two-state solution and undercut the possibilities of a renewal of negotiations,” Guterres told the U.N. Security Council.

“I call on the Israeli Government to abandon its annexation plans,” he said.

Israeli Prime Minister Benjamin Netanyahu’s Cabinet is preparing to start discussions on July 1 on annexation of the West Bank, territory Israel captured in a 1967 war and that Palestinians seek for a state.

Palestinians vehemently oppose the annexation plan, as do most world powers. Palestinian leaders have also completely rejected a peace proposal unveiled in January by President Trump, in which Washington would recognize Jewish settlements as part of Israel.

“Should Israel decide to extend its sovereignty, it will be doing so with respect to areas over which it has always maintained a legitimate, historical and legal claim,” Israel’s U.N. Ambassador Danny Danon told the council.

Senior aides to Trump began discussions on Tuesday on whether to give Netanyahu a green light for his annexation plan. Secretary of State Mike Pompeo said on Wednesday that extending Israeli sovereignty was a decision “for Israelis to make.”

“I understand that many of you have concerns,” U.S. Ambassador to the U.N. Kelly Craft told the council. “At the same time, we ask that you also hold the Palestinian leadership accountable for acts they are responsible for.”

Guterres called on the Middle East Quartet of mediators — the United States, Russia, the European Union and the United Nations — “to take up our mandated mediation role and find a mutually agreeable framework for the parties to re-engage, without preconditions, with us and other key states.” Any Israeli move to annex parts of the West Bank would be “fatal” for Middle East peace hopes and must be prevented, if necessary with countermeasures, more than 1,000 lawmakers from across Europe said in a letter to European governments.

The June 23 letter, signed by 1,080 lawmakers from 25 countries and made public on Wednesday, raises parliamentary concerns about Trump’s Israeli-Palestinian peace plan. The signatories said annexation would break international law.

“Such a move (annexation) will be fatal to the prospects of Israeli-Palestinian peace and will challenge the most basic norms guiding international relations,” the letter said.

“Acquisition of territory by force has no place in 2020,” said the lawmakers, who included members of parliament from Hungary and the Czech Republic, two countries sympathetic to Israel and to Trump’s Jan. 28 peace plan.

The European lawmakers called for “commensurate consequences” if Israel, which has more than 400,000 settlers in the West Bank, went ahead with annexation — a reference to possible economic, trade or other sanctions.

“Failure to adequately respond would encourage other states with territorial claims,” the letter said. In a new public letter, the overwhelming majority of the House Democratic Caucus joined a growing chorus of opposition to possible Israeli unilateral annexation of the occupied West Bank, which could move forward as early as next week.

House members who signed the letter written and circulated by Reps. Jan Schakowsky, Ted Deutch, David Price and Brad Schneider added their voices to those of other Democratic leaders and lawmakers, including presidential nominee Joe Biden, Speaker of the House Nancy Pelosi, Senate Minority Leader Chuck Schumer, more than three quarters of Senate Democrats and 10 Senate challengers competing in key races across the country.

In the letter, addressed to Israeli Prime Minister Benjamin Netanyahu, Alternate Prime Minister Benny Gantz and Foreign Minister Gabi Ashkenazi, 189 members of Congress wrote: “The Democratic party, from the House to the Senate to the next president of the United States, has now made absolutely clear that they do not and cannot support unilateral annexation in the West Bank,” said J Street’s president Jeremy Ben-Ami. “For the Israeli government to carry out annexation in the face of this overwhelming opposition would be incredibly harmful to the future of Israelis and Palestinians and to U.S. interests.”