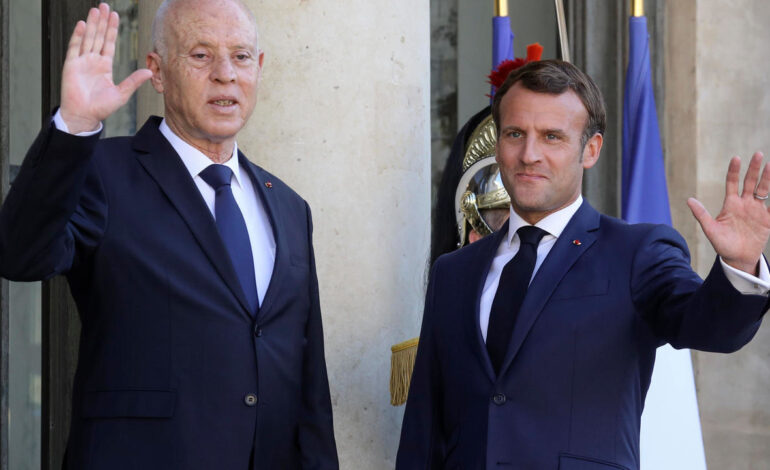 The visit by newly-elected Tunisian President Kais Saied to France on June 22 was intended to discuss bilateral relations, trade, etc. But it was also a missed opportunity, where Tunisia could have formally demanded an apology from France for the decades of French colonialism, which has shattered the social and political fabric of this North African Arab nation since the late 19th century.

A heated debate at the Tunisian parliament, prior to Saied’s trip, highlighted the significance of the issue to Tunisians, who are still reeling under the process of socio-economic and political transitions following the popular uprising in 2011.

Sadly, the Tunisian parliament rejected a motion forwarded by the centrist Karama coalition calling for a French apology, despite a 15 hours’ long debate.

“We are not animated by any bitterness or hatred, but such apologies will heal the wounds of the past,” Seifeddine Makhlouf, head of Al-Karama, said during the debate. Makhlouf is under no moral obligation to explain his motives. A French apology to Tunisia, and many other African countries that have endured French colonialism for hundreds of years, is long overdue.

Ravaged by a relentless economic crisis, and still largely dependent on France as a foremost trade partner, Tunisia fears the consequences of such a just demand, which, if officially made, will also include a call for compensation as a result of nearly 75 years of exploitation and the subsequent collective trauma suffered by several generations.

While Saied was paying his diplomatic dues to Paris, statues were tumbling down across the Western world; some of former slave owners, others of racist ideologues and pioneers of colonialism.

A particular statement made by Osama Khelifi of the Qalb Tounes party delineates the unfortunate reality that continues to govern the thinking of Tunisia’s political elites.

“We are not going to feed Tunisians with such notions,” he said.

Inconsequential to Khelifi, and others among the parties that rejected the motion, is that coming to terms with the past is a prerequisite for any nation that wishes to start anew. What would be the point of revolutions and revolutionary discourses if Tunisian politicians insist on merely trying to get along with a status quo that is imposed on them by outside forces?

While Saied was paying his diplomatic dues to Paris, statues were tumbling down across the Western world; some of former slave owners, others of racist ideologues and pioneers of colonialism.

On June 7, the statue of Edward Colston, a 17th century slave trader, was taken down in the English town of Bristol. This was only one of many other monuments that were destroyed or defaced throughout the United States and Europe.

However, across the English Channel, the French government remained obstinate in its refusal to take down any similar statues, as if insisting on its refusal to revisit — let alone take responsibility — for its sinister past, especially the bloody and tragic events that shattered the African continent.

Statues are built to honor individuals for their great contributions in any society. They are also erected as a reminder to future generations that they must emulate these presumably great individuals. France, however, remains the exception.

Unsurprisingly, French government officials are engaging in nonsensical arguments as to why such statues, as that of Jean-Baptiste Colbert — a White aristocrat who, during the 17th century reign of King Louis XIV, established the horrific “Black Code”, the rules according to which Black slaves were to be treated in the colonies — should remain intact. A vandalized statue of 17th century aristocrat Jean-Baptiste Colbert who developed horrific codes for the treatment of black slaves.

(French President Emmanuel) Macron himself has made it clear that “the Republic … won’t remove any statues.”

The collective rethink underway in various Western societies, which have greatly benefited from the exploitation of Africa, was ignited by the brutal murder of George Floyd at the hands of American police officers in Minneapolis.

Spontaneous popular movements, led mostly by the youth, connected the dots between racism, slavery and colonialism, taking to the streets in their millions to demand a complete overhaul of the status quo.

Yet, France’s political elites continue to embrace French exceptionalism, arguing that, unlike the American experience with race and slavery, French law was never, at any point in the past, purposely racist.

In truth, past arrogance — “mission civilisatrice” — continues to define France’s attitudes towards the present. This is why the French colonial experience was particularly keen on composing a clever discourse to account for its exploitation of Africa and other regions in the world.

In this skewed rationale, France’s invasion of Algeria in 1830 was dubbed as something else entirely. Algeria was now an integral part of France, they argued. Other countries, like Tunisia and Morocco, were made protectorates, ruled indirectly through corrupt local authorities. The rest of France’s African colonies were ravaged mercilessly by greedy French administrators.

Unlike other European experiences, the French colonial connection to Africa did not disintegrate in recent decades. Instead, it took on different forms, known by the now disparaging term “Françafrique.”

The expression “Françafrique” was introduced in 1955 to describe the “special relations” between France and the newly-independent African countries, now bound with what France called “cooperation agreements.” It was rightly understood that France was entering a new phase of colonialism in Africa: neo-colonialism.

Despite former French president François Hollande pledging to eradicate the term “Françafrique” and its practical meaning, little has changed between France and its former African colonies.

It is, however, the responsibility of Tunisia — and the whole of Africa — to confront France and other colonial and neo-colonial regimes, not merely by demanding apologies and compensation, but insisting on a complete change of the present, unequal relations as well.

Indeed, France can be found in every aspect of life, whether political, military, economic or even cultural, in many African countries. In the cases of Mali and Libya, the French intervention takes on an even more crude manifestation: domineering and violent.

To appreciate French neo-colonialism in Africa, consider this: 14 African countries are still economically bound to France through the use of special currency, the CFA franc, designed specifically by France to manage the trade and economies of its former colonies. This jarring example of French neo-colonialism in Africa is consistent with France’s colonial and racist past.

Whether France chooses to come to terms with its past is entirely a French affair. It is, however, the responsibility of Tunisia — and the whole of Africa — to confront France and other colonial and neo-colonial regimes, not merely by demanding apologies and compensation, but insisting on a complete change of the present, unequal relations as well. “In the colonial context the settler only ends his work of breaking in the native when the latter admits loudly and intelligibly the supremacy of the White man’s values,” wrote Frantz Fanon in “The Wretched of the Earth.”

The opposite must also be true. Tunisia, and many African countries, must demand a French apology. By doing so, they declare “loudly and intelligibly” that they are finally free from the “White man’s (selfish and racist) values” and that they truly see themselves as equal.