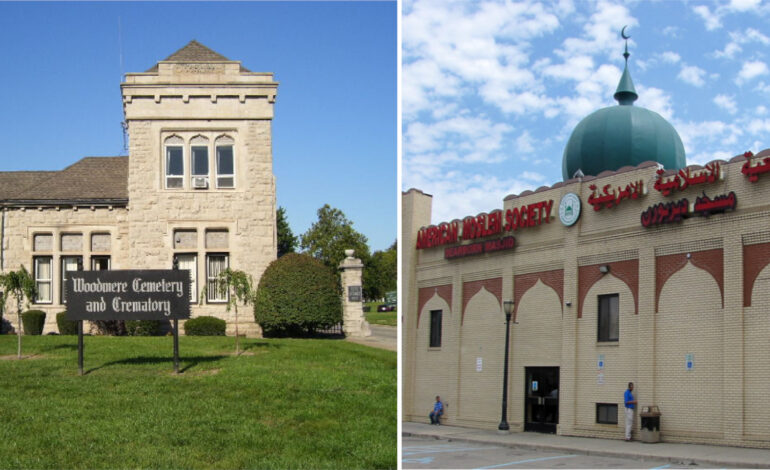 DEARBORN— A press conference is planned at the American Moslem Society (AMS) mosque at 9945 Vernor Hwy, Dearborn, Michigan at 11 a.m. on Friday, July 3, regarding a recent lawsuit filed by the mosque that claims Woodmere Cemetery breached its contract with AMS over grave sites.

The Arab American News will carry the press conference live on its Facebook pages.

For decades, the mosque and Woodmere Cemetery of Detroit have been good neighbors along Riverside Drive and had an agreement regarding burial sites. Over time, AMS has purchased thousands of grave spaces in bulk from the cemetery and passed them on at cost to its many members and their families.

This year, however, Woodmere told the AMS that it will not allow any burials from the mosque unless all 1,000 graves in a third planned burial site are paid in full. AMS has paid in advance for 622 grave spaces at a cost of $388,750, under a signed contract with the cemetery.

The cemetery claims that its contract with the mosque requires the mosque to pay in advance for all graves before using even one of them. AMS lawyer Steven Cohen said this claim is purely invented as the contract has no such clause.

Besides breach of contract, which is being asserted by the American Moslem Society, Woodmere Cemetery has apparently breached the community’s trust during a pandemic — Dawud Walid, CAIR-MI

The cemetery has proposed to end the contract entirely and make a new one in which the cost of graves and burial-related products and services is roughly doubled. AMS said the cemetery has made an obvious but cynical calculation that the close-knit community will pay double to have its family members buried near the mosque and near the thousands of other community members who already rest at Woodmere Cemetery.

The mosque has filed suit in Wayne County Circuit Court for breach of contract against the cemetery. The complaint also accuses Woodmere of shoddy treatment given to existing burials in the AMS sections of the cemetery. In these sections, the cemetery’s careless maintenance and landscaping practices have caused damage to existing burial vaults and permitted persistent wet and muddy conditions around the graves. These conditions, which do not appear to exist in any other area of the cemetery, are unsettling to family members and make the visitation of graves unpleasant and, at times, impossible.

“The situation at hand is not a mere inconvenience, but is interference in the timely, sacred burial rites of Dearborn Muslims,” said CAIR-MI Executive Director Dawud Walid. “Besides breach of contract, which is being asserted by the American Moslem Society, Woodmere Cemetery has apparently breached the community’s trust during a pandemic which has affected Southeast Michigan more than many other areas in the nation.”