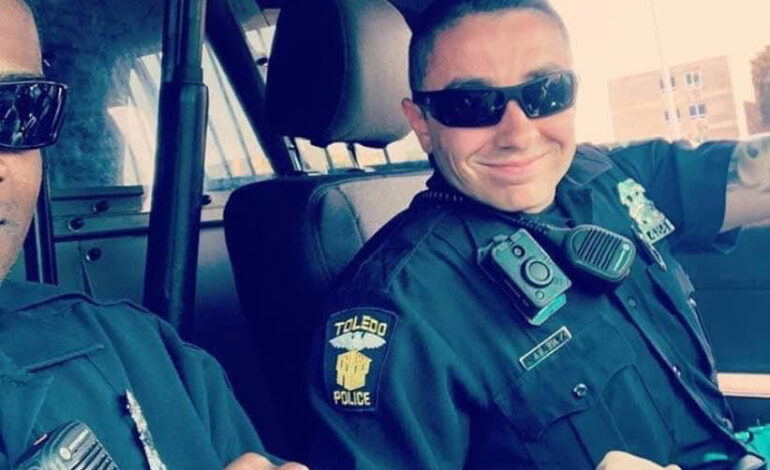 Responding officers arrived on scene and transported Dia to a local hospital, where he died as a result of his injuries. Police say Dia was wearing his department-issued body armor. Additional officers arrived at the scene of the shooting and set up a perimeter looking for the shooter. Witnesses stated that they had observed Henry flee into a wooded area. A drone and a K-9 unit provided assistance with the search.

During the course of the investigation, officers heard a gunshot coming from the wooded area. At approximately 3:15 a.m., Toledo Police officers located Henry, deceased from an apparent gunshot wound to the head. Witnesses confirmed that he was the one who had shot Dia earlier.

More information will be released at a news conference scheduled for Monday, July 6. Exact time and location is being determined. Mayor Wade Kapszukiewicz told AP News he was at Toledo Hospital where Dia was taken after the shooting.

“I will never forget the sight of Officer Dia being wheeled out of the hospital on a gurney, his body wrapped in an American flag, flanked by about 30 Toledo police officers, saluting and weeping,” the mayor said.

Information on funeral and memorial services appears at the end of this article. Dia had been a Toledo police officer for two years

A devout Muslim and member of Toledo’s Arab community

Dia was part of a large but spread-out Arab American community in the Toledo area. His father, Younes, is Lebanese American and has many relatives in Dearborn. Dia’s second cousin Charles Scheib, also a Toledo resident, told The Arab American News that the late officer was a devout Muslim and was devoted to his Islamic and Arabic heritage.

“This was a random, senseless act,” said Scheib, who works in the real estate industry in Ohio. “Everyone that knew Anthony knew he was a good, kind-hearted man. He was a devoted Muslim, prayed five time a day, a big follower of the Ahl al-Bayt. His beliefs played a role in his service to his community.”

(Anthony) would always tell me, treat people like Imam Ali would treat people. He had a great heart and an infectious smile — cousin Charles Scheib

Dia joined the Toledo Police Department on July 27, 2018. He is the 31st Toledo Police officer to be killed while on duty. Dia leaves behind wife, Jayme, and two children, 8- and 6-years old.

“He would always tell me, treat people like Imam Ali would treat people,” Scheib said. “He had a great heart and an infectious smile.” Dia with his wife, Jayme, and two children

Anthony Dia’s family has requested that indoor services be limited to family, first responders and faith community members. The service will live-streamed, details of which are forthcoming.

Funeral and memorial services for Dia will be held at the John F. Savage Arena in Toledo at 10 a.m. on Tuesday, July 7. Family arrives at 8:30 a.m. The arena, also known as “Savage Hall”, is located at 2025 North Douglas Road in the University of Toledo campus.

Burial procession will leave the arena at 12 p.m. and head towards the Toledo Memorial Cemetery on 6382 Monroe Street, in Sylvania, Ohio.

Dia was a member of the Imam Ali Mosque located at 6961 Whiteford Center Road, in Lambertville, Michigan. A GoFundMe has been set up to help Dia’s family at this time: https://www.gofundme.com/f/tpd-officer-anthony-dia-support-amp-updates