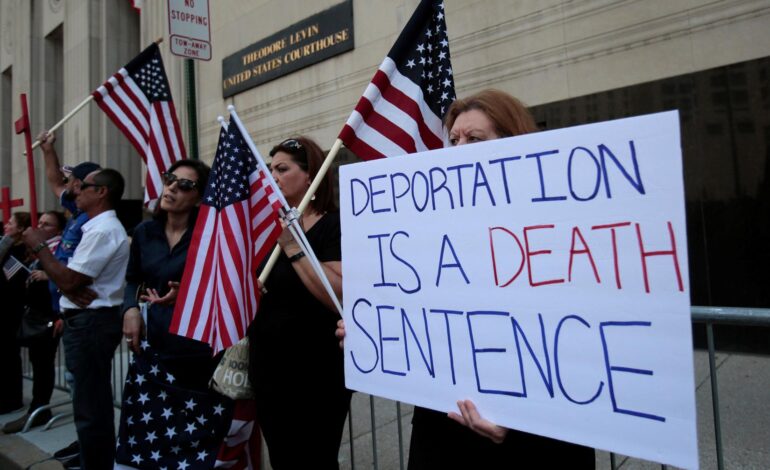 Protesters rally outside the federal court just before a hearing to consider a class-action lawsuit filed on behalf of Iraqi nationals facing deportation, in Detroit, Michigan, June 21, 2017. – Photo by Reuters/Rebecca Cook

WASHINGTON, D.C. – On Thursday, the U.S. Supreme Court declined to hear a bid by a large group of Iraqis convicted of crimes in the United States to prevent imminent deportation to their home country, where they say they could face persecution and torture.

The justices let stand a lower court’s 2018 ruling that the federal judiciary lacked the authority to stop the planned deportations. The Iraqis had argued that the U.S. Constitution’s so-called suspension clause — relating to a person’s ability to challenge confinement by the government — empowered courts to review their claims.

The U.S. government then conducted raids and detained hundreds of the Iraqis as part of a larger push by President Trump to increase immigration enforcement.

The Iraqis, represented by the American Civil Liberties Union, sued the U.S. government in federal court in Detroit to try to halt the deportations.

The Iraqis, many of whom are Christian, have said they face likely torture and death in Iraq. They wanted U.S. courts to halt the deportations so they could reopen their cases before immigration judges and present new evidence that they should be allowed to stay because they faced possible torture.

A judge in Detroit ruled for the Iraqis in 2018, but the Cincinnati, Ohio-based Sixth U.S. Circuit Court of Appeals reversed the decision.

On June 25, in another case raising similar issues, the Supreme Court enhanced the ability of the U.S. government to quickly deport illegal immigrants, including asylum seekers, with limited judicial review.