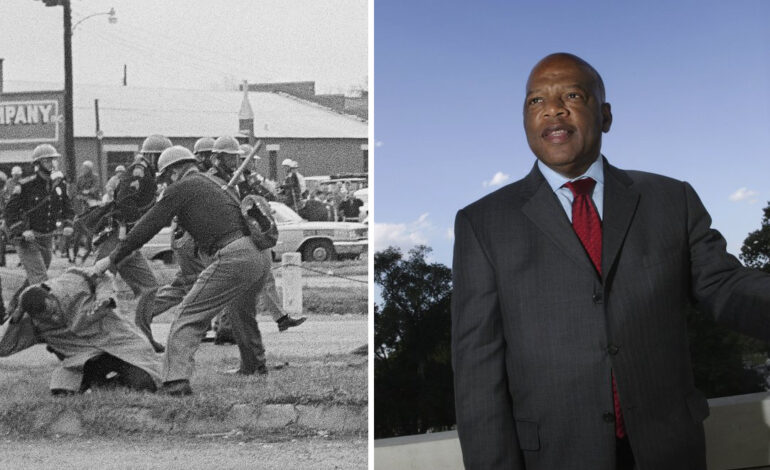 “I thought I was going to die a few times,” the late civil rights hero and long-time U.S. Rep. John Lewis (D-GA) said in a 2004 interview, mentioning Selma and a 1961 mob beating at a bus station in Montgomery, Alabama.

WASHINGTON (REUTERS) — John Lewis, who died on Friday at age 80, was a hero of the U.S. civil rights movement of the 1960s who endured beatings by White police and mobs and played an outsized role in American politics for 60 years.

Lewis, an Alabama sharecropper’s son elected in 1986 as a Democrat to the U.S. House of Representatives from Georgia, died after a battle with pancreatic cancer.

A protege of civil rights icon Martin Luther King Jr., Lewis led sit-ins to integrate all-White lunch counters, was one of the original “Freedom Riders” who integrated buses and suffered a skull fracture while demonstrating for Black voting rights in a savage beating by a nightstick-wielding White Alabama state trooper during an incident now called “Bloody Sunday.”

Lewis was just 18 when he first met King and went on to play a vital role in the civil rights movement that strove for equality for Blacks in an America grappling with racial bigotry and segregation, particularly in the South.

As a congressman, Lewis tangled with President Trump starting even before Trump took office. In January 2017 Lewis said he did not view Trump as a “legitimate” president because of Russian meddling in the 2016 election to boost his candidacy. Trump drew criticism even from fellow Republicans when he called Lewis “all talk” and “no action.”

Lewis was present at many of the civil rights movement’s seminal moments and was the youngest speaker at the 1963 March on Washington where Martin Luther King delivered his “I Have a Dream” speech, hoping for a land where Blacks “will not be judged by the color of their skin but by the content of their character.”

Lewis, the last surviving speaker at that speech, maintained the fight for civil rights until the end of his life. He made his last public appearance in June, as protests for racial justice swept the United States and the world.

Using a cane, he walked with Washington, D.C. Mayor Muriel Bowser on a street by the White House that Bowser had just renamed Black Lives Matter Plaza, which had just been dedicated with a large yellow mural — large enough to be seen from space — reading “Black Lives Matter.”

Amid a national movement to abolish Confederate monuments and symbols, calls have grown rename the bridge in Selma, Alabama, where Lewis was brutally beaten during a 1965 voting rights march, for Lewis. It is named for Edmund Pettus, who fought in the Confederate Army and robbed African Americans of their right to vote after Reconstruction.

Long before the March on Washington, Lewis helped found the Student Nonviolent Coordinating Committee (SNCC), which became a prominent civil rights group, and served as its president for three years.

He proved he was willing to risk his life for the cause of civil rights and non-violent protest and organized the first lunch-counter sit-ins demanding service for Blacks at Whites-only eateries.

In 1960, at a Whites-only diner in Nashville, Tennessee, a White waitress dumped cleaning powder down his back and water on his food. He was beaten by Whites in South Carolina and Alabama during 1961 anti-segregation bus tours called Freedom Rides. And he suffered further injuries during “Bloody Sunday” in 1965 in Selma.

“I thought I was going to die a few times,” he said in a 2004 interview, mentioning Selma and a 1961 mob beating at a bus station in Montgomery, Alabama. “I thought I saw death, but nothing can make me question the philosophy of non-violence.”

“Generations from now, when parents teach their children what is meant by courage, the story of John Lewis will come to mind — an American who knew that change could not wait for some other person or some other time, whose life is a lesson in the fierce urgency of now,” Obama said a White House ceremony.

Lewis was born on Feb. 21, 1940, in Troy, Alabama, when Blacks faced segregation in all public facilities and were effectively barred from voting in the U.S. South — where Black slavery ended only due to the 1861-1865 Civil War — thanks to the notorious “Jim Crow” laws. Lewis plunged into the civil rights movement as a student at Fisk University in Nashville, where he organized the sit-ins at segregated lunch counters.

“The Nashville sit-ins became the first mass arrest in the sit-in movement, and I was taken to jail,” Lewis said.

“I’ll tell you, I felt so liberated. I felt so free. I felt like I had crossed over. I think I said to myself, ‘What else can you do to me? You beat me. You harassed me. Now you have placed me under arrest. You put us in jail. What’s left? You can kill us?’”

The “Bloody Sunday” attack took place when segregationist Alabama Governor George Wallace directed police to use night sticks and tear gas to stop the peaceful march for voting rights led by Lewis and others.

As hundreds of Black protesters crossed the Edmund Pettus Bridge, state troopers, many on horseback, waded into the crowd swinging billy clubs. Lewis was beaten so badly that his scars were visible decades later when he served in Congress.

In a moving postscript to his protest years, Elwin Wilson, a White man who assaulted Lewis at a bus station in Rock Hill, South Carolina, in 1961, traveled to Washington in 2009 to apologize tearfully to Lewis, who forgave him.

“That’s what the movement was always about — to have the capacity to forgive and move toward reconciliation,” Lewis told the New York Times in 2013 after Wilson died at age 76.

After leaving the SNCC in 1966, Lewis worked for community organizations. He later was President Carter’s choice to head the federal volunteer program ACTION and he was elected to the Atlanta City Council in 1981.

Lewis lost his first run for the House in 1977 to Democrat Wyche Fowler in the campaign to replace Andrew Young, the first Black elected to Congress from Georgia in modern times. Carter had picked Young to be U.S. ambassador to the United Nations.

When Fowler headed to the Senate, Lewis defeated another civil rights figure, Julian Bond, in 1986 for the House seat representing the congressional district encompassing Atlanta.

In the House, he amassed a liberal voting record and was a member of the House Democratic leadership team.

Lewis began the 2008 campaign supporting Hillary Clinton as she faced Obama for the Democratic presidential nomination. After Obama won Georgia’s Democratic primary, Lewis switched allegiance in a key moment of the campaign.

As a congressman in June 2016, Lewis used the non-violent protest tactics he learned from King to help organize a 24-hour sit-in on the House floor to push for gun control legislation following a shooting that killed 49 people at a gay nightclub in Orlando, Florida. The rare protest virtually shut down the chamber.