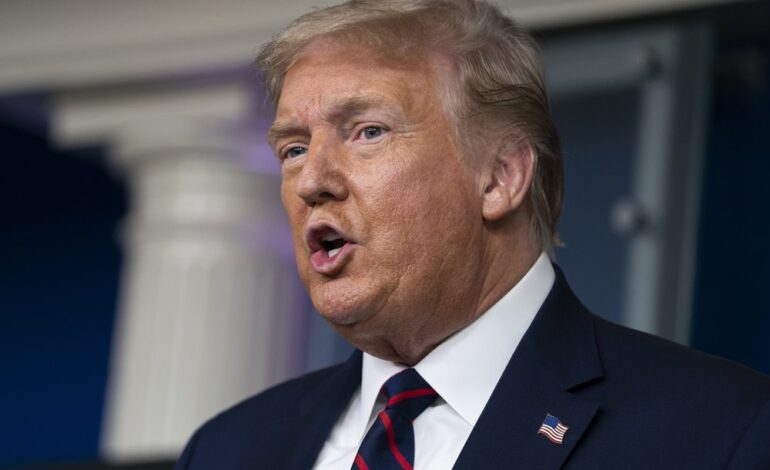 WASHINGTON, D.C. — After a three-month break from his infamous COVID-19 press conferences from the White House, President Trump took to the podium on Tuesday to give both sobering and hopeful news.

“Some areas of country doing very well, others doing less well,” Trump said of the disease caused by what he repeatedly called the “China virus.” “It will probably, unfortunately, get worse before it gets better. I don’t like saying that, but that’s the way it is.”

Breaking from his routine nonchalance, Trump urged the country to take wearing masks and social distancing seriously. Trump said that he himself had become accustomed to a face mask, which he carried with him but did not put on.

“Whether you like the mask or not, they have an impact,” Trump said, adding that he was “getting used to the mask.”

He also told young Americans to do their part to stop the spread of the disease and avoid crowded bars. But Trump also offered an encouraging forecast on the disease, which has spiked nationwide in recent months, especially in early-reopening states.

“The vaccines are coming, and they’re coming a lot sooner than anybody thought possible,” Trump said.

AP News said the first U.S. vaccines could begin final-stage testing in a study of 30,000 people as early as next week. It also said that a series of huge studies are planned in the U.S. to start each month through the fall in hopes of eventually having several vaccines to use.

Trump also touted the production of thousands of ventilators in the U.S. and said the country’s handling of the pandemic had generally been better than others’. He said none of the 50 governors needed “anything right now” to handle new outbreaks in their states.

Johns Hopkins University tallies more than 3.8 million confirmed cases of the novel coronavirus in the U.S. so far, with more than 140,000 deaths.

Trump was not joined by medical experts from the White House coronavirus task force, though the president said Dr. Deborah Birx was “right outside.” Dr. Anthony Fauci of the National Institute of Allergy and Infectious Diseases said he was not invited to speak at the briefing. Health experts, including in Michigan, have urged mask use and social distancing as cases have crept up in recent months. In Michigan, large Fourth of July parties and get-togethers derailed the sate’s reopening plans, with Governor Whitmer saying school and business reopening depended on how careful Michiganders were about protecting themselves and others going forward.

U.S. lawmakers and the White Hose are currently negotiating a trillion-dollar-or-more “phase four” federal pandemic aid package. Republicans and Democrats are now racing to strike a deal on a plan to continue aid to Americans before the current $600-per-week unemployment benefits expire at the end of the month.

Senate Majority Leader Mitch McConnell has promised a new round of stimulus checks to people earning less than a certain income level. Some GOP members disagree with others from their party and even the White House about the proposed big spending plan, ongoing unemployment benefits and other provisions in their respective plans.