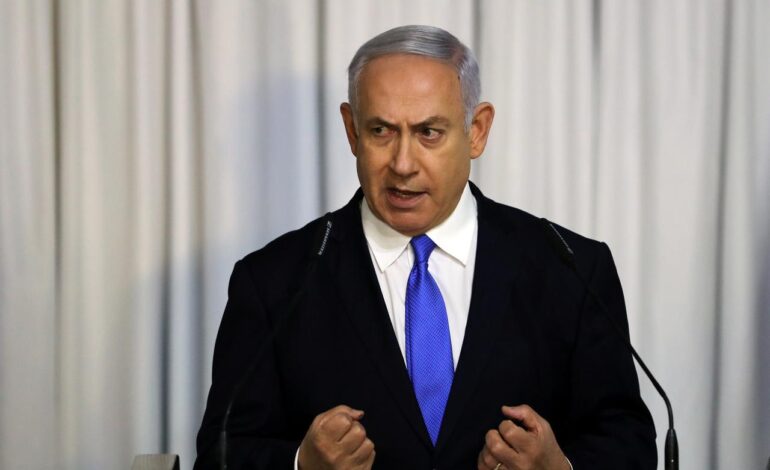 Netanyahu, whose image has been significantly tarnished due to his ongoing corruption investigation and trial, is laboring to distract from his own personal woes by diverting attention elsewhere. Photo: Ammar Awad/Reuters

For the first time since the Israeli war on Gaza in 2014, the Israeli government of Prime Minister Benjamin Netanyahu is signaling its willingness to engage in negotiations regarding the release of the bodies of two Israeli soldiers believed to be held by resistance groups in Gaza. But will another prisoner exchange similar to that of October 2011 follow anytime soon?

On July 9, Palestinian and Israeli media reported on an Israeli government communication sent to the Palestinian group, Hamas, through an intermediary. It included an Israeli offer to swap the bodies of Palestinians held in Israel in exchange for the bodies of the two soldiers, Oron Shaul and Hadar Goldin.

Alternatively, Israel is offering the release of some Palestinian prisoners held in Israeli prisons, so long as they have “no blood on their hands”, an Israeli reference to Palestinian prisoners who have not taken part in direct attacks that may have led to the killing of Israeli occupation soldiers or armed illegal Jewish settlers.

Hamas and others quickly dismissed the Israeli proposal as a non-starter for a serious negotiation. The Palestinian group had already indicated that it will not negotiate any prisoner exchange deal with Israel until the latter releases scores of Palestinian prisoners who were re-arrested in the months and years following the 2011 exchange.

However, even while Palestinians were still celebrating the return of hundreds of their loved ones, Israel began re-arresting many of the newly-released prisoners under various pretenses, rendering the entire exercise futile.

In the 2011 exchange, Israel also refused to release senior Palestinian political figures from Fatah, Hamas, the Popular Front for the Liberation of Palestine (PFLP), the Islamic Jihad and other groups. This decision had derailed negotiations for months and was understood as Israel’s way of wanting to hold on to many prominent Palestinian figures as bargaining chips for future negotiations.

These figures include Fatah’s most popular leader, Marwan Barghouti and PFLP leader Ahmad Sa’adat, among others.

In 2014, Israel also re-arrested Nael Barghouti, from his home in Kobar, near Ramallah, making him the longest-held Palestinian prisoner in Israeli prisons. Barghouti is a particularly important bargaining chip for Israel. It must be said that the reason that Israel is quite generous in these prisoner exchanges is not due, as some claim, to the notion that Israel values the life of its citizens to the extent that it is willing to exchange them with a disproportionately large number of Palestinians.

If that logic was correct, why does Israel then transfer its own citizens, including children, to dangerous and highly-militarized illegal West Bank Jewish settlements?

Now that his illegal annexation of West Bank land scheme has been postponed, (Netanyahu) is in desperate need of another battle that would present him as some kind of hero in the eyes of Israelis, especially his right-wing constituency.

If Israel truly values the lives of its citizens, it would have, long ago, dismantled the illegal settlements and tried, in earnest, to reach a just peace agreement with the Palestinian leadership.

Instead, Israeli leaders, who often trigger wars for their own political benefits, as Netanyahu has done repeatedly in the past, use prisoner exchanges also as a means to garner positive political capital and favorable media coverage.

Netanyahu, whose image has been significantly tarnished due to his ongoing corruption investigation and trial, is laboring to distract from his own personal woes by diverting attention elsewhere. Now that his illegal annexation of West Bank land scheme has been postponed, he is in desperate need of another battle that would present him as some kind of hero in the eyes of Israelis, especially his right-wing constituency.

Aside from the bodies of the two soldiers, two Israelis, Avram Avera Mengistu and Hisham al-Sayed, who had allegedly crossed the fence into Gaza by mistake, are also held in the Strip. Future TV footage of two coffins, draped by Israeli flags, along with two other Israelis being set free, would certainly prove to be a huge boost for the embattled Israeli leader.

Palestinian groups in Gaza understand this well. They also know that an opportunity of this nature might not present itself again for years. Therefore, they are keen to ensure a future prisoner exchange satisfies three major points: First, the release of all re-arrested prisoners since 2011; second, the release of as many Palestinians as possible out of the over 5,000 currently held in Israeli prisons and, finally, the release of top Palestinian prisoners representing the various PLO and Islamic factions.

The latter point, in particular, is quite significant, because the traditional rivals, Hamas and Fatah, have been actively pursuing a politically united front in the face of the imminent Israeli annexation of nearly 30 percent of the West Bank. The release of top Fatah leaders, such as Marwan Barghouti, for example, shall have immense positive impact on Palestinian public mood, especially among Fatah supporters, boosting the unity talks like never before.

Israel, of course, will do its utmost to prevent Palestinians from unifying their political ranks but, considering the fact that Palestinians are holding four Israelis in Gaza, the cards are not entirely in Netanyahu’s hands.

This is not to suggest that Palestinian groups are not feeling the pressure as well. The families of thousands of imprisoned Palestinians are desperate for some good news regarding their loved ones, especially as health conditions among prisoners are deteriorating due to the spread of the coronavirus pandemic.

Various signs indicate that a prisoner exchange between Israel and Palestinian groups is drawing near. The question is, will Netanyahu unleash his winning political card now or will he wait till later, when he needs it most?