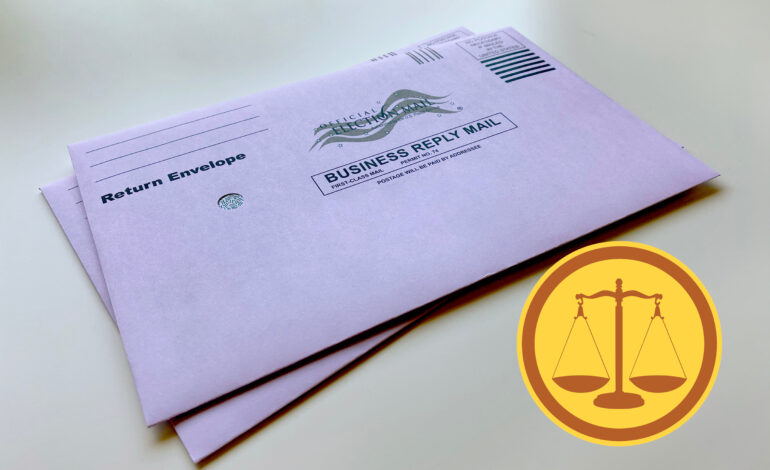 Karen Rotondo allegedly forged her daughter’s signature on an absent voter application and mailed it to the township clerk. Photo: Tiffany Tertipes

LANSING — A Plymouth Township woman is facing a felony charge after the township clerk, who was reviewing applications for absentee voter ballots, discovered the woman’s alleged attempt to obtain a ballot in the name of another person.

Michigan Attorney General Dana Nessel has charged Karen Lynne Rotondo, 57, of Plymouth Township, with one count of knowingly making, filing or publishing a false signature on an absent voter application, a felony punishable by up to five years in prison and/or a $1,000 fine.

Rotondo allegedly forged her daughter’s signature on an application for an absent voter application and mailed the application to the Plymouth Township clerk. The daughter, who now resides out of state, was unaware that the application had been filed in her name.

“Serious criminal consequences exist for those who attempt to tamper with our election process,” Nessel said. “Michiganders should know that absentee ballot applications, which is the subject of this fraud investigation, are not just rubber-stamped and processed robotically. Clerks and other election officials conduct careful examinations of these applications to ensure they are authentic, complete and comport with the law.”

In this case, upon receipt of the application, the Plymouth Township clerk followed established procedures and discovered evidence that the absent voter ballot application was not executed by the person to whom it was sent. Thus, no absentee ballot was actually sent and no illegal voting actually occurred.

The case was referred to the Attorney General’s office by the Michigan Department of State.

“As I’ve said before and throughout my tenure, my goal is to make it easier to vote and harder to cheat in Michigan,” said Secretary of State Jocelyn Benson. “And make no mistake, when we receive allegations of people trying to cheat we immediately investigate; and if credible, refer for prosecution in order to maintain the integrity of Michigan elections.”

Michigan Election Law sets out procedures for ensuring that people are able to exercise their right to vote, while at the same time protecting the integrity of elections. The law allows votes to be cast by absentee ballot and provide procedures to combat fraud in the use of this method of voting. An absentee ballot may not be provided to an eligible voter unless and until a properly signed application for such a ballot is received by a city or township clerk. A person who forges a signature on an absent voter ballot application is guilty of a felony.

Rotondo is expected to be formally arraigned on the charge in the coming days. Additional court dates and details are not yet available.