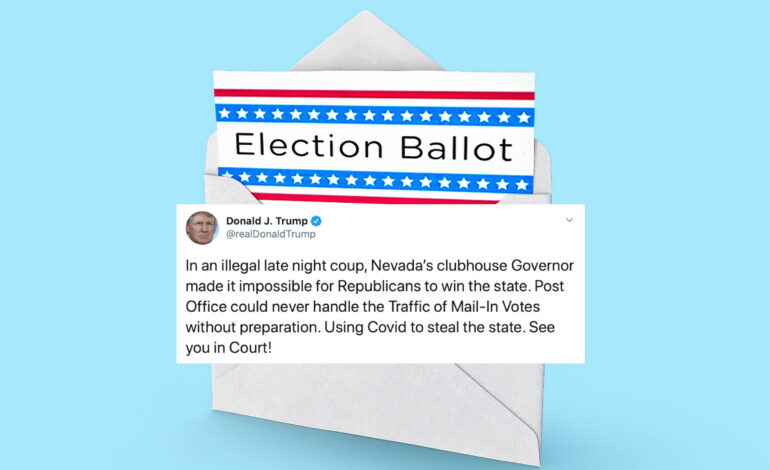 WASHINGTON, D.C. — More drama over mail-in ballots on Monday as President Trump threatened to sue the state of Nevada over its mail-in ballot initiative.

The threat came after Democratic lawmakers in the state passed a bill on Sunday that ensures every Nevada resident would receive a ballot in the mail ahead of the November election.

Nevada will become the seventh state to send the ballots out to all registered voters once its Democratic governor Steve Sisolak signs the bill. Utah, Colorado, Hawaii, Oregon and Washington have conducted their early elections completely by mail, due to safety concerns over the COVID-19 pandemic. California and Vermont have also promised to join those states in taking the measure.

Trump has repeatedly said, without evidence, that voting by mail will lead to rampant election fraud. He said Nevada’s Sunday legislation was an illegal “late night coup.”

In an illegal late night coup, Nevada’s clubhouse Governor made it impossible for Republicans to win the state. Post Office could never handle the Traffic of Mail-In Votes without preparation. Using Covid to steal the state. See you in Court! https://t.co/cNSPINgCY7

Nevada mailed ballots to voters ahead of its primary election in June and encouraged residents not to risk in-person voting. Most of the state’s polling places were closed, leading to waits of as much as seven hours in Las Vegas, Reuters reports.