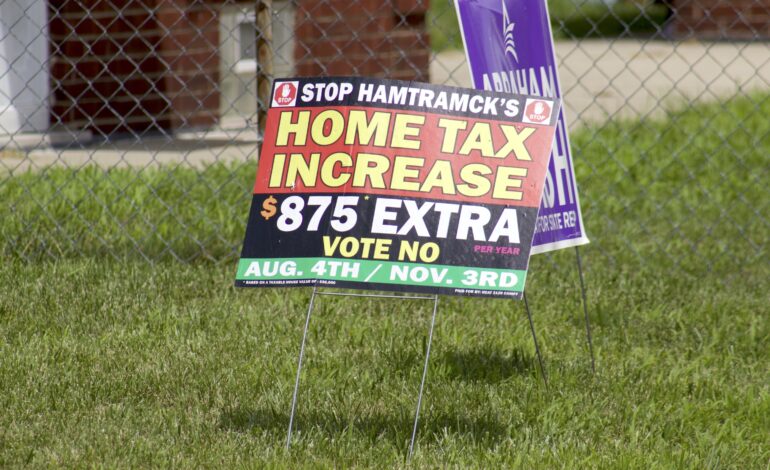 A lawn sign in Hamtramck asking voters to say no to the August school bond proposal and the city's fire/police retirement millage in November. Hamtramck residents cast 2,571 votes against the school bond on Tuesday. All photos: Hassan Abbas/The Arab American News

HAMTRAMCK — The Hamtramck School District lost out on a proposal on Tuesday that could have meant the construction of a new elementary school and other infrastructural projects by levying seven mills in property taxes.

We are disappointed our students will not see improvements to their learning environment. We will continue to work collaboratively with the entire school community to determine what options we have … to significantly improve (this environment). — HPS Superintendent Jaleelah Ahmed

But the results from Tuesday’s state primary elections show the 30-year bond proposal was a hard pill to swallow for Hamtramck voters. After some equipment issues and a delayed absentee count, the final tally was 2,571 against the bond and 1,380 in favor of it.

“Our district is home to many historically rich buildings, including the oldest functioning elementary school building in Michigan,” Superintendent Jaleelah Ahmed said in a statement on Tuesday. “While we are proud of our heritage, our aging buildings desperately require upgrades to support our community’s children.

“We are disappointed our students will not see improvements to their learning environment. We will continue to work collaboratively with the entire school community to determine what, if any, options we have to significantly improve our learning environment moving forward.”

School Board President Evan Major, who spoke to The Arab American News about the district’s needs and the bond ahead of the election, joined Ahmed in reflecting on the bond proposal.

“While this effort was not successful, it was clear that when voters had accurate information we found a lot of support,” Major said in a release. “We’ve got some work to do communicating with the community so that we can still accomplish these essential improvements. Our commitment to our students, staff, and families has not changed. Therefore, we must still find a way forward.”

Nasr Hussain, one of the most vocal of organizers against the bond, did not reply to a request for a comment at press time. His group, Hamtramck Citizens Against Taxation, did, however, post a victory note on Wednesday.

It is official , 100% reported, and the vote no wins By a large Majority!!We would like to thanks everyone who…

Posted by Hamtramck Citizens Against Taxation on Wednesday, August 5, 2020

“It is official, 100 percent reported, and the vote no wins by a large majority!” the group said. “We would like to thanks everyone who participated in this election (regardless of what you voted in) and want you to keep in mind we need to do the same on Nov. 3.”

In November, the city of Hamtramck is asking for a 10 mill property tax increase to fund, in part, its future police and fire department pension obligations. Hussain’s group campaigned against both the school bond and the city’s fire/police millage. Not surprisingly the absentee vote occupied a considerable percentage of the overall vote: 3,111 of 4,626 total. Only 35 percent of registered voters turned out to vote, in person and by absentee ballot, indicating a low-turnout election.

But Hamtramck City Clerk August Gitschlag said Tuesday’s turnout was impressive if one considered past elections.

“Things did not go smoothly, but that was all due to equipment issues,” he added. “The longer ballot, with three folds in it, did not like the tabulators, and often jammed and ripped. Also, in one precinct, voters continued to put folded ballots into the tabulator, jamming it and causing issues.”

This meant a late night for Gitschlag. In fact, because returned absentee ballots couldn’t be counted till the day of the election, election workers throughout the state saw long work hours. But Gitschlag said the city now has time to request the county and equipment suppliers make some adjustments so things are smoother in November.